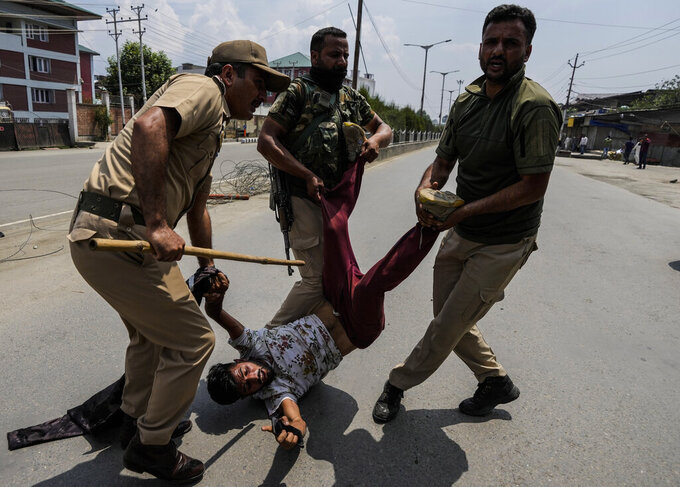 SRINAGAR, India (AP) — Police on Sunday detained dozens of people in Indian-controlled Kashmir as they dispersed Shiite Muslims who attempted to participate in processions marking the Muslim month of Muharram.

Scores of Muslims defied severe security restrictions in parts of the main city of Srinagar and took to streets chanting religious slogans. The restrictions include a ban on the Shiite religious procession.

Muharram is among the holiest months for Shiites across the world and and includes large processions of mourners beating their chests while reciting elegies and chanting slogans to mourn the death of the Prophet Muhammad’s grandson Hussein and 72 companions in the battle of Karbala in present-day Iraq.

Sunday’s procession marked the eighth day of Muharram, two days before its peak on the day of Ashura.

In 2020, dozens were injured as Indian forces fired shotgun pellets and tear gas to disperse the procession.

Some main Muharram processions have been banned in the Indian-controlled portion of Kashmir since an armed insurgency broke out in 1989 demanding the region’s independence from India or its merger with neighboring Pakistan. Tens of thousands of civilians, rebels and government forces have been killed in the conflict.

Kashmiri Muslims have long complained that the government is curbing their religious freedom on the pretext of maintaining law and order while promoting an annual Hindu pilgrimage to the Himalayan Amarnath Shrine in Kashmir that draws hundreds of thousands of visitors.

The ongoing Hindu pilgrimage has drawn hundreds of thousands of visitors from across India amid massive security with tens of thousands of soldiers guarding the routes leading to the cave shrine.