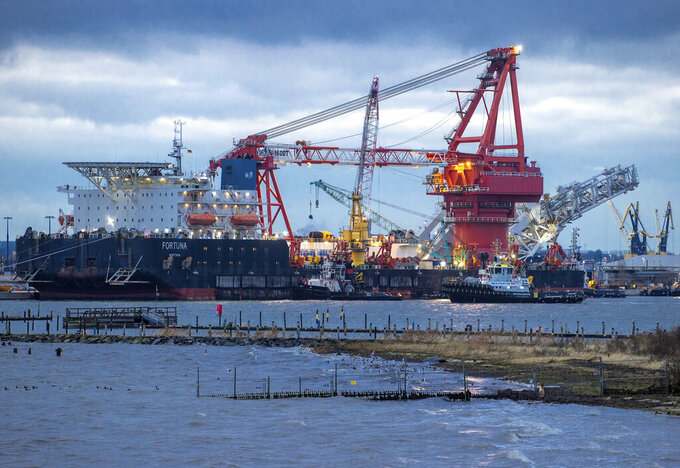 Jens Buettner, ASSOCIATED PRESS
FILE - In this Jan. 14, 2021 file photo, tugboats get into position on the Russian pipe-laying vessel "Fortuna" in the port of Wismar, Germany. Almost 3 million European workers can't afford to heat their houses amid rise in energy prices, according to a labor organization's study released Wednesday Sept. 22, 2021. (Jens Buettner/dpa via AP, File)

The European Trade Union Confederation, which represents 45 million members, said that 15% of the EU's working poor - the equivalent of 2,713,578 people - lacks enough money to turn on the heating.

Wholesale prices for gas and electricity have surged across Europe, raising the prospect of increases in already high utility bills and further pain for people who took a financial hit from the coronavirus pandemic.

“There are millions of low-paid workers in Europe who have to choose between heating their home or feeding their family properly or paying the rent despite working full time," ETUC Deputy General Secretary Esther Lynch said. “Unfortunately, rising energy prices mean even more people face returning from a long day or night’s work to a cold home this winter and their children doing their homework in the cold."

The union confederation called on the European Union to introduce a “threshold of decency" into a draft minimum wage directive to guarantee that statutory minimum wages never pay less than 60% of the median wage and 50% of the average wage of any EU country.

The confederation said that 20 EU members currently have statutory minimum wages that fall below those levels.

The ETUC said it based its study on data from the EU's statistic agency. The figures it used refer to the number of workers who earn less than 60% of the national median “equivalised income", a measure of household income that takes account of the differences in a household’s size and composition.

“They do not include those who earn below 50% of the national average wage, meaning there are likely to be many more working people struggling to make ends meet," the confederation said.

ETUC said Cyprus has the highest percentage of working poor (45.6%) who can't afford heating, ahead of Bulgaria, Lithuania, Portugal, Greece and Italy.

The organization said the situation has gotten worse in 10 member countries over the past decade and that the recent hike in energy prices is putting even more workers at risk of falling into energy poverty.

Transportation and energy ministers from the EU's 27 member countries met Wednesday in Slovenia to discuss the EU's “Fit for 55” climate and energy package, which is designed to help the 27-nation bloc reduce greenhouse gas emissions cut of 55% by 2030 compared to 1990 levels.

Earlier this month, the EU vice president in charge of climate issues said the bloc should ensure that the most vulnerable people won’t pay the heaviest price of the transition to renewable energy sources.