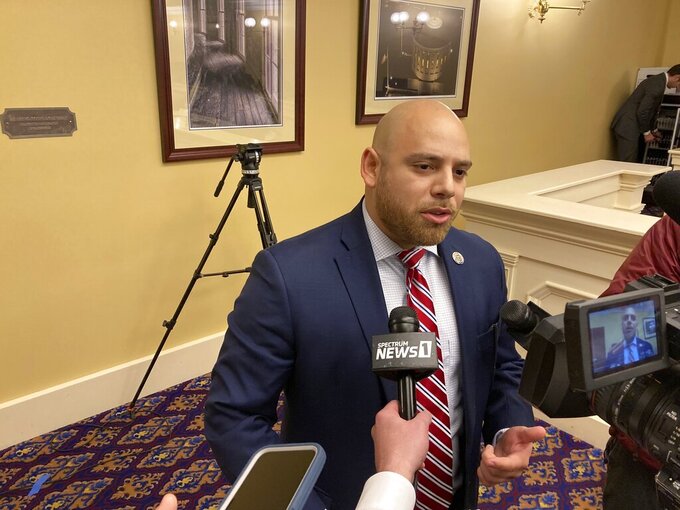 Andrew Welsh-Huggins, ASSOCIATED PRESS
Rep. Al Cutrona, a suburban Youngstown Republican, discusses a bill that would prohibit private companies and public entities from requiring proof of COVID-19 vaccination to enter a facility or conduct business, on Thursday, Nov. 18, 2021, in Columbus, Ohio. The anti-vaccine legislation also says schools could not prevent students from participating in activities based on their COVID-19 vaccination status. (AP Photo/Andrew Welsh-Huggins)

COLUMBUS, Ohio (AP) — Private companies and public entities would be banned from requiring proof of COVID-19 vaccination to enter a facility or conduct business, under anti-vaccine legislation passed by House Republicans on Thursday that would cover everything from privately run theaters to publicly-owned sports arenas.

In addition, schools could not prevent students from participating in activities based on their COVID-19 vaccination status, according to the legislation approved by the GOP-controlled House on Thursday after the Commerce and Labor Committee voted in favor of it hours earlier.

It goes next to the Senate where the Republican president has expressed skepticism about bills interfering with business decisions.

The bill also exempts employees from workplace vaccine mandates if they show proof of COVID-19 antibodies, provide evidence that they run the risk of a negative medical reaction, or decline the vaccine for reasons of conscience, including religious convictions. Employees or students who claim such exemptions couldn't be fired or expelled.

The bill doesn't extend the exemptions to people who work in children's hospitals or on intensive care units, but requires those entities to make a “good faith effort” to provide an alternative placement for unvaccinated workers.

“Individuals must have the opportunity to have that autonomy for themselves," said Rep. Al Cutrona, a suburban Youngstown Republican who helped shepherd the bill through committee. "More importantly, we want to ensure that people are not losing their jobs or their form of employment.”

But before it passed Thursday, Commerce and Labor Chairman Dick Stein said he expected the full House to approve the bill. The Republican from Norwalk in northern Ohio said the legislation was about personal choice and individual freedom.

“Mandating through any source, whether it’s federal or state, will never create compliance,” said Stein, who said he's fully vaccinated. "We need to do this through education and free will and personal choice between physicians and their families and the communities they live in."

Workplace vaccine mandates have become more common recently, with hospitals, state and local governments and some major corporations requiring COVID-19 shots for employees. The mandates have led to overwhelming compliance — in some cases 99% of workers — although a small but vocal number have faced dismissal, filed lawsuits or sought exemptions.

The legislation is “bad public policy that undermines public health, trust in science and the vaccine, and puts the lives of Ohioans at risk, all for the sake of a vocal minority who represents a very extreme view on this COVID-19 virus,” said Rep. Allison Russo, a suburban Columbus Democrat and a health care policy consultant.

Whether the bill will become law remains uncertain. All major business and health groups previously opposed the legislation, and on Thursday, the Ohio Manufacturers' Association called the new bill “an unnecessary invasion of employer rights.”

Senate President Matt Huffman, a Lima Republican, has also signaled his disapproval of any bill regulating how private businesses can run their companies. Republican Gov. Mike DeWine has said he opposes both government vaccine mandates and government anti-vaccine mandates.