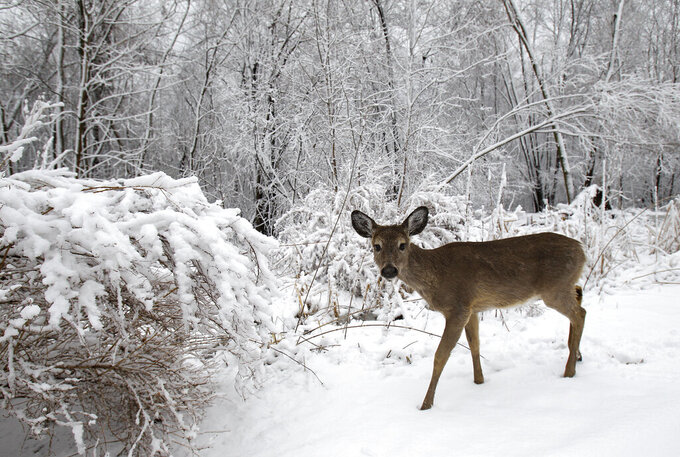 The Department of Natural Resources released data that shows hunters registered 103,623 deer over the weekend. That compares with 90,023 deer during last year's opening weekend. The annual average opening weekend harvest from 2017 to 2021 was 102,347.

The higher kill total came despite far fewer hunters in the woods. Total sales of DNR hunting licenses that allow hunters to use firearms to kill deer stood at 539,550 as of midnight Sunday, down about 2% from 551,809 at the same point during opening weekend last year.

Agency officials reported six firearm-related injuries, including one fatality. A 41-year-old man shot and killed an 11-year-old boy on Sunday while he was trying to unload his gun in the backseat of a vehicle in Green Lake County. The man and boy were members of the same hunting party.

Also on Sunday, a 33-year-old man shot himself in the finger while manipulating a handgun in Forest County. He was treated for the injury and survived.

A 22-year-old man was hunting in Sauk County when he was shot in the leg during a drive. DNR officials said a 20-year-old man shot him while firing at a running deer. Both men were part of the same hunting party.

In Marquette County, a 16-year-old boy shot a 69-year-old woman. The boy was hunting from a ground blind when he fired at a deer. The bullet flew across a pond and hit the woman. Both the boy and the woman were part of the same hunting party.

In Iowa County, a 15-year-old boy shot himself in the foot while he was unloading his gun while sitting the passenger seat of a truck.

And in Oneida County, a 24-year-old man shot himself in the foot. He was repairing his rifle sling when his hand froze to the weapon. As he tried to free his hand he hit the trigger and the gun went off.

DNR officials recorded 12 incidents during the entirety of the 2021 nine-day season. The state has averaged about six incidents every year over the last decade.