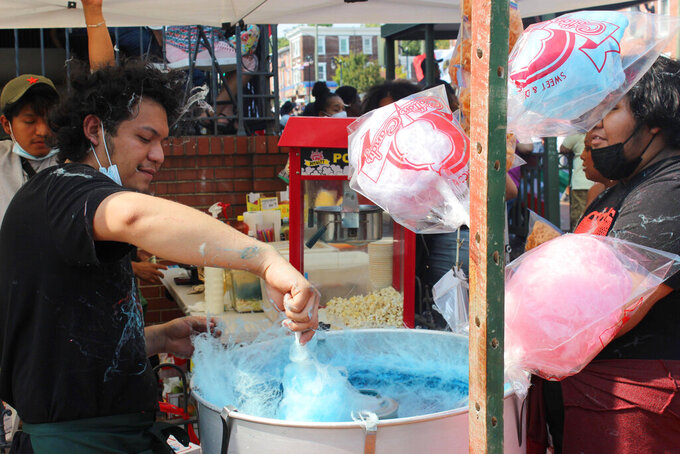 WILMINGTON, Del. (AP) — People danced in the streets and watched from their doorsteps as passing parade floats serenaded Wilmington’s majority-Hispanic Hilltop neighborhood last Sunday with the booming tunes of bachata and reggaetón.

Many donned capes made of flags from Puerto Rico, Mexico and the Dominican Republic as they weaved through the crowd.

On the sidewalks, vendors served up mangoes with chamoy, empanadas and esquites — corn served in a cup with mayo, chili powder and a healthy dash of strong cheese.

On one corner, blue wisps of cotton candy lazily floated into the street as a vendor bundled together a sugary heap for a waiting customer.

Wilmington’s Hispanic Festival and Parade had returned, after being canceled last year due to COVID-19.

Hundreds of people poured onto West 4th Street last Sunday afternoon to celebrate the festival’s 45th anniversary in the city.

The event celebrated the accomplishments of the community over the past year, while also commemorating the challenges the community has faced due to the pandemic.

“It’s really an opportunity for all of our community to come together on a day and just celebrate one another,” said Delsy Morales, parade chair and board member of Nuestras Raices Delaware, the nonprofit that puts the yearly event together. “To celebrate even the challenges of the previous year and being able to say, you know, ‘we’ve made it’ — we’re all here while celebrating their culture.”

Over the past year, as the pandemic led to an economic downturn not seen since the Great Depression, Latinos were hit the hardest in Delaware, state and federal data show. They saw the largest percent increase in unemployment in 2020, outpacing any other group in the state.

Floats with a hodgepodge of different sized speakers trundled down the parade route — slowly passing Dominican Café, a cornerstone of the Hilltop neighborhood. The café, which has been in the owner’s family for more than 40 years, provided food to local hospitals and churches at the height of the pandemic.

The café has built a reputation of always having its doors open — only briefly closing to protect its employees as COVID-19 raged across the state.

Last Sunday, the eatery’s employees stood on the sidewalk in front of the café — grilling chicken.

The festival also connected the community with healthcare and other vital services.

A couple of blocks away from the café, a mobile vaccination clinic run by ChristianaCare and Westside Family Healthcare offered free vaccines to attendees.

Similarly, grassroots ambassadors of 302 Guns Down, a community organization aimed at reducing gun violence, provided information and resources about efforts to reduce gun-related violence in Wilmington.

One of the last organizations to march in the parade was the Roberto Clemente League — a baseball organization for Wilmington’s Black and brown youth. The organization has come to represent more than a league for the children, as it has expanded to become a year-round safe haven for them.

The league is named after Roberto Clemente, a professional baseball player from Puerto Rico who became one of the first Latin American superstars in the major league.

The league also bears his name as a tribute to the legacy of activism that Clemente left behind against racism and for the equitable treatment of Latin and Black baseball players in the major leagues.

The league is now working to raise funds in order to revitalize their home field at the nearby Woodlawn Park.

The event also marked the beginning of Hispanic Heritage month, which officially began on Sept. 15.

Morales hopes that the event continues the legacy of consistency that it has built over the past 45 years — further solidifying the organization’s role in celebrating and helping the community.