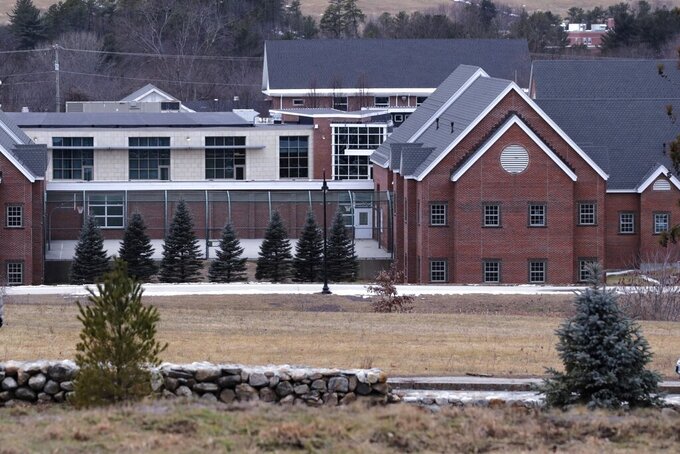 Charles Krupa, ASSOCIATED PRESS
FILE - In this Jan. 28, 2020, file photo is the Sununu Youth Services Center in Manchester, N.H. As states from California to Maine consider drastic changes to youth detention centers, New Hampshire is grappling with its own facility that has been rocked by abuse allegations from years past. The state’s Legislature will vote Thursday on a proposed state budget that would close the sprawling facility — housing fewer than 20 children on a campus built for 144 — by March 2023 and replace it with a new 18-bed center. (AP Photo/Charles Krupa, File)

CONCORD, N.H. (AP) — As states from California to Maine consider drastic changes to youth detention centers, New Hampshire is grappling with its own facility that has been rocked by abuse allegations from years past.

The state’s Legislature will vote Thursday on a proposed state budget that would close the sprawling facility — housing fewer than 20 children on a campus built for 144 — by March 2023 and replace it with a new, 18-bed center.

Though debate over the center’s future began years ago, it has come to a head amid recent abuse allegations made by more than 300 men and women who say they were physically or sexually abused as children by 150 staffers at the state’s facility from 1960 to 2018. Eleven former workers have been arrested since April, and the state Division for Children, Youth and Families has said it is cooperating with the broad criminal investigation launched in 2019.

The facility’s potential closure, however, is part of a larger national trend, said Vidhya Ananthakrishnan, director of youth justice initiatives for The Justice Lab at Columbia University.

While the number of incarcerated children has declined over the last 30 years, conversations about how to best serve children often haven’t gone far enough, she said. But she believes both the pandemic and last year’s racial reckoning have helped advance the debate to an important crossroads.

“There’s this sense that we know we’re not doing what we need to do for kids when we lock them up, and we’re not giving them the kind of support and focus on their families and all the circumstances that help them become more thriving adults,” she said. “It’s a question of what that actually looks like. That’s the thing people are starting to grapple with.”

States’ efforts would get a boost under the budget proposal released last month by President Joe Biden, which calls for increasing the overall youth justice budget from $359 million to $796 million and spending $100 million to support efforts to close detention facilities and invest in community alternatives to support youth.

In Maine, the Legislature voted to close the state’s only youth detention center but the governor hasn’t said whether she’ll sign the bill. The proposal would direct the Maine Department of Corrections to make a plan to close the Long Creek Youth Development Center in South Portland by 2023. The Maine Department of Corrections is opposed to the bill, saying it doesn’t take a “balanced approach to ensuring rehabilitation and public safety.”

In Oklahoma, three state-run youth facilities are being consolidated into one campus featuring cottages with individual bedrooms and a more therapeutic environment. In Wisconsin, lawmakers responded to abuse allegations at their state’s only youth prison by passing legislation several years ago to replace it with smaller, regional facilities, but the money to do so has yet to materialize. California, meanwhile, is ending admissions to its state-operated Division of Juvenile Justice facilities as of July 1. The state-operated facilities are to close entirely by June 30, 2023, with youth then instead going to county-run facilities.

New Hampshire state Sen. Cindy Rosenwald, D-Nashua, said she is troubled both by the incredibly high cost of operating the state’s facility in Manchester at 10% capacity and the fact that many of the kids cycle in and out. New Hampshire currently spends $13 million per year to operate the Sununu Youth Services Center, named for former Gov. John H. Sununu and father of the current governor.

“That is just reckless spending,” she said. “And I don’t think it is the optimal program to address the needs of these kids.”

Last year, Vermont closed its only juvenile detention center after a drop in the number of kids housed there and a lawsuit accusing the 30-bed Woodside Juvenile Rehabilitation Center in Essex of housing children with disabilities in dangerous conditions, including the use of restraints, unsupervised seclusion and long-term isolation.

Vermont plans to open a new six-bed facility that will be run by a private New Hampshire company with a focus on rehabilitation. It will be primarily for adolescent boys ages 12 through 17 who are involved with the criminal justice system, said Sean Brown, commissioner of the Vermont Department for Children and Families.

“It will be geared to stabilize kids in crisis, quickly start working with them and hopefully start transitioning them to lower levels of care immediately upon their arrival so that we can reconnect those kids and youth with their communities and their families as quickly as possible, back into their natural support networks,” Brown said.

In the meantime, Vermont has an agreement to house those children at the Sununu Center in New Hampshire. It placed its first Vermont youth at the facility about a month ago, Brown said.

Joe Ribsam, director of New Hampshire’s Division for Children, Youth and Families, said he agrees with lawmakers that managing a massive building and campus for a small number of kids doesn’t make sense either fiscally or programmatically. In recent years, the state has invested in building a comprehensive system of care to address children’s behavioral health, and Ribsam said he believes that holds promise as a long term solution to reducing youth incarceration. In the meantime, he considers the current debate, with its focus on cost, to be a bit backward.

“I think it’s just as, if not more critical, to think of these issues in terms of policy than cost,” he said. “I think the focus has been a little off for a long time around the cost being the primary driver of the conversation,” he said. “That being said, the policy conversation has been happening, it just seems to happen after the budget pressure.”