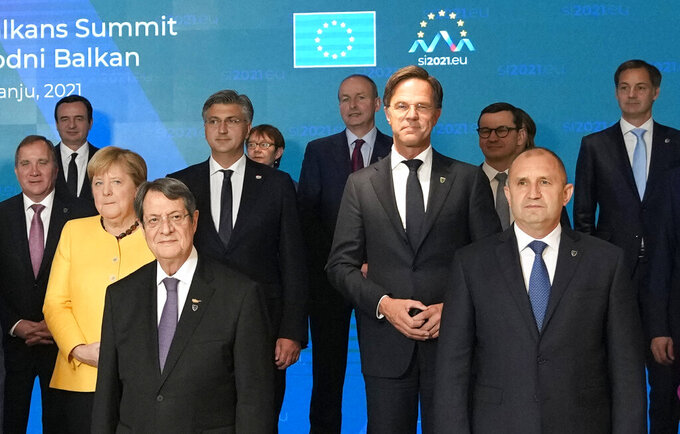 Petr David Josek, ASSOCIATED PRESS
Cypriot President Nicos Anastasiades, front left, and Bulgaria's President Rumen Radev, front right, pose with other EU and Western Balkans leaders during a group photo at an EU summit at the Brdo Congress Center in Kranj, Slovenia, Wednesday, Oct. 6, 2021. European Union leaders are gathering Wednesday to reassure six countries in the Balkans region that they could join the trading bloc one day if they can meet its standards but are unlikely to give any signal even about when they might advance in their quests. (AP Photo/Petr David Josek)

BRDO CASTLE, Slovenia (AP) — European Union leaders tried to reassure six Balkan countries they could eventually join the trading bloc if they met its standards, but the leaders failed to provide a credible signal Wednesday that the EU's enlargement process will be relaunched in the near future.

Despite years of talk about the “European perspective” of Albania, Bosnia, Kosovo, Montenegro, North Macedonia and Serbia, the EU's progress on admitting them has stalled.

A meeting at Brdo Castle, a Renaissance-style fortified palace in Slovenia, gave EU leaders the opportunity to reaffirm their “unequivocal support” for their Western Balkans partners. But they stopped short of offering a timeline for their accession.

The bloc's 27 leaders stressed in their conclusions that any advances would be “based upon credible reforms by partners, fair and rigorous conditionality and the principle of own merits.” They also underlined the need for the EU to “maintain and deepen its own development, ensuring its capacity to integrate new members.”

North Macedonia’s prime minister, Zoran Zaev, said that if EU promises don’t materialize, “people in the Western Balkans will feel big disappointment that will create huge damage to the European idea of unity and cooperation.”

The six nations are at different stages on the EU membership path. Montenegro and Serbia are the most advanced, having opened formal accession talks years ago. Albania and North Macedonia are awaiting the official opening of negotiations, and Kosovo and Bosnia are potential candidates.

The latest hold-up focuses on Albania and North Macedonia. They have fulfilled the criteria for beginning entry talks, but EU member Bulgaria opposes North Macedonia’s inclusion because of a dispute over language and national identity.

EU membership is based on a candidate’s progress in areas such as respect for the rule of law and democratic standards, media freedom and judicial independence, and the implementation of specific socio-economic reforms.

France insisted two years ago that the functioning and decision-making of the EU should be revamped before new members are admitted. Speaking after the meeting, French president Emmanuel Macron said lingering tensions between Kosovo and Serbia, as well as the quarrel between Bulgaria and North Macedonia, complicate matters.

“But our wish is really to be able to give again short-term perspectives to the Balkans, which are within Europe,” Macron said.

European Commission President Ursula von der Leyen, the head of the EU’s executive arm, acknowledged the effort the prospective member nations had made so far.

Slovenia, which currently holds the EU’s rotating presidency, backs its neighbors’ membership hopes. Croatia was the last country admitted into the EU, in 2013.

The prospect of membership has served as a powerful driver of political and economic reform in the Balkans and has sometimes helped to keep a lid on tensions in a region torn apart by war in the 1990s.

Serbian President Aleksandar Vucic said Slovenia’s Prime Minister Janez Jansa fought “till the last day” for 2030 to be included in the declaration as the deadline for all Western Balkan states to join, but faced opposition from some EU leaders.

Vucic said that “a certain progress” has been made during the summit to give the Balkans more tangible perspective for membership. But he also stressed that while waiting to become a member, Serbia needs to strengthen its ties with non-EU nations such as Russia and China.

Asked about the Slovenian presidency's proposal to give the Balkan countries a firm timeline for when they would join, German Chancellor Angela Merkel said she didn’t support it.

Despite the lack of progress, von der Leyen praised the bloc's effort to invest 30 billion euros ($34.7 billion) in the Balkans over the next seven years to support recovery from the coronavirus pandemic and to accelerate the transition to renewable energy.

“It is very important to make clear to the Western Balkans countries how much we care about them and that we are their favorite partner," von der Leyen said.