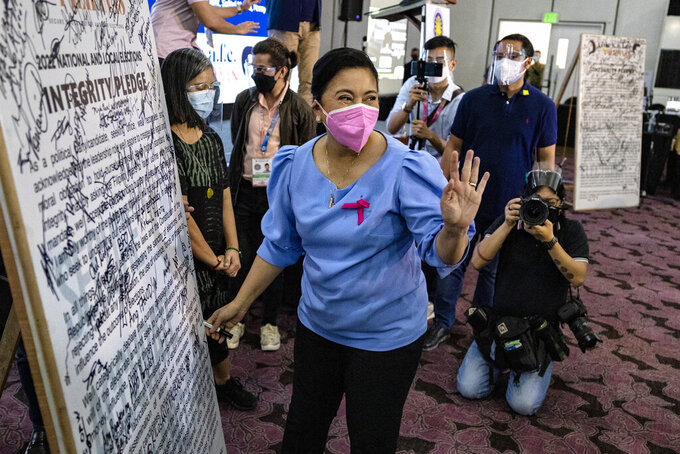 Ezra Acayan, ASSOCIATED PRESS
Philippine Vice President Leni Robredo gestures after filing her certificate of candidacy for next year's presidential elections before the Commission on Elections at the Sofitel Harbor Garden Tent in Metropolitan Manila on Thursday, Oct. 7, 2021. Robredo, who leads the opposition, announced Thursday she would run for president in next year's elections in a long-anticipated decision that would bring the liberal lawyer to a potentially bruising faceoff with the son of the late dictator Ferdinand Marcos who has declared he would seek the top post. (Ezra Acayan/Pool Photo via AP)

MANILA, Philippines (AP) — Philippine vice president and opposition leader Leni Robredo registered her presidential candidacy Thursday for next year's elections in a move that would bring the pro-democracy advocate to a new faceoff with the son of the late dictator Ferdinand Marcos who is also seeking the top post.

Robredo joined a growing list of aspirants for the May 9 elections after talks failed for key candidates to unite behind a single contender who would go against whoever President Rodrigo Duterte and his ruling party endorse for the race.

Robredo earlier said she may decide to run if ex-senator Ferdinand “Bongbong” Marcos Jr., whom she narrowly defeated in the 2016 vice presidential race, sought the presidency. He filed the papers on Wednesday, leading some on social media to depict the new rivalry as a boxing rematch.

Philippine presidents and vice presidents are elected separately, and Robredo and Duterte have had strained ties for years. She has attacked his brutal crackdown on illegal drugs that has left thousands of mostly poor suspects dead, and led to the International Criminal Court opening an investigation.

She has also hit Marcos Jr.’s refusal to apologize and express remorse over the thousands of human rights victims under his father’s iron-fist rule from 1972 to 1981.

A lawyer, former legislator and social activist who advocates democracy, human rights and good governance, Robredo backed the 1986 “people power” protests that culminated in the ouster of Marcos and became a harbinger of change in authoritarian regimes.

“We need to liberate ourselves from the current situation. I will fight, we will fight,” Robredo told a televised news conference where she announced her candidacy while acknowledging an uphill climb. “They have the money, machinery, an entire infrastructure that can spread any story they want to project.”

“But no amount of noise can ever drown out the truth,” she said, as her followers repeatedly chanted her name. “We will defeat the old and rotten brand of politics."

Robredo, 56, is the latest key politician to declare their intention to succeed Duterte, whose six-year term, one of the most tumultuous and controversial in recent Philippine history, ends in June next year. The ailing leader, known for his brash rhetoric and expletive-laden outbursts, initially planned to run for the vice presidency under the PDP-Laban party that he leads but backed out Saturday after his popularity rating dropped and prompted him to announce his retirement from politics.

The candidacy of Marcos Jr. immediately sparked a protest by more than 100 left-wing activists who vowed to campaign against him as they burned effigies of his father and Duterte, an ally of the Marcoses.

Marcos Jr. said Wednesday he was ready to face Robredo and the other contenders.

The elder Marcos died in exile in Hawaii three years after his ouster without admitting any wrongdoing, including accusations that he and his family amassed an estimated $5 billion to $10 billion while he was in power.

A Hawaii court found Marcos liable for human rights violations in 1995 and awarded $2 billion from his estate to compensate more than 9,000 Filipinos who filed a lawsuit against him for torture, incarceration, extrajudicial killings and disappearances.

Imelda Marcos and her children were allowed to return to the Philippines in 1991, and have since made a political comeback, winning seats in Congress and powerful provincial posts and laying the ground for a return to the presidential palace and the top job they felt was stolen from them.