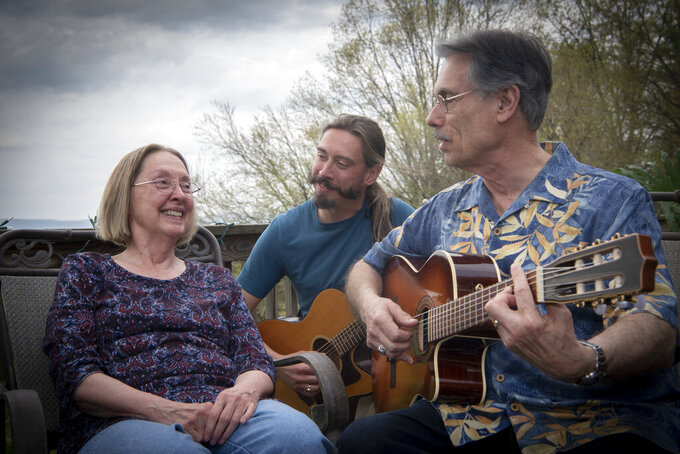 BRADDOCK HEIGHTS, Md. (AP) — Flies swarmed around the trunk of Leah DuRant’s car, and she wondered what could have possibly stirred them up.

Turns out, it was an ominous warning sign for what lied ahead.

Three or four days earlier, DuRant had gone to Costco and, by her son John’s estimate, purchased $200 worth of meat products. But the shopping bags never made it inside her Braddock Heights home.

So, when the trunk popped open nearly 100 hours later, the flies and the maggots were already laying waste to what DuRant had bought as if it were a dead animal along the side of the road. She seemed shocked.

“Just the disconnect,” John DuRant Jr. remarked. “There was no recollection anything was bought. It didn’t add up.”

For most of the last decade, DuRant Jr. and his father, Leah’s primary caretakers today, have watched her mental condition gradually erode.

Leah DuRant, 75, is one of the 6.2 million Americans who have dementia, a cognitive disorder that impairs one’s ability to remember, think, reason and interact socially, and typically develops as people get older. In many cases, it renders familiar faces and normal, everyday life unrecognizable to the afflicted person.

DuRant’s case is an advanced one and being managed as best as possible by her husband and son — both of whom live with her — and a small team of caregivers.

Still, as John DuRant Jr. put it, they can feel like strangers to her.

“It’s been a cycle, a gradually progressing disease,” he said. “I look back at the times, it doesn’t feel like that long ago where we were able to have reasonable conversations with her. Now, most of the time, she doesn’t recognize me.”

Developing a cure and better treatments for dementia has taken on renewed urgency since the number of Americans with the disease is on pace to double in the next 30 years, according to the Alzheimer’s Association.

Worldwide, it more than doubled over the past 30 years, as cases have exploded from an estimated 20.2 million in 1990 to more than 50 million in 2020, according to the World Health Organization, with nearly half of the cases involving people 85 and older.

In 2020, the WHO announced that dementia was one of the top 10 causes for death, with nearly two million deaths attributed to it worldwide in 2019 alone.

Dementia is an umbrella term for a group of diseases associated with cognitive decline. Alzheimer’s disease is both the most common form and the leading cause of dementia, with more than 70 percent of dementia cases being attributed to Alzheimer’s.

The coronavirus pandemic has only exacerbated the situation for those who have dementia, isolating them in many cases and denying them social interactions that can be vital for their care. The Alzheimer’s Association projects that Alzheimer’s-related deaths have increased by 16 percent during the pandemic.

One in three seniors will die with Alzheimer’s or another form of dementia, according to the Alzheimer’s Association.

Point of Rocks resident Rosario Campos, 63, has not been able to visit her 95-year-old father, Manuel, who has the disease, during the pandemic.

Manuel Campos is living by himself and being treated in his native Peru since it was too cost prohibitive for the family to have him treated in his home state of Arizona or near Rosario in Maryland.

So it is difficult for Rosario to assess how he is being cared for since she can’t travel to see him due to COVID-19 restrictions. Her interactions with him are presently limited to phone calls, during which he often doesn’t recognize that it is his daughter on the other end of the line.

“It is terrible,” Rosario Campos said. “It is very, very hard. I spend every night thinking about him.”

There is an ongoing effort to corral some of the costs associated with caring for someone with Alzheimer’s and dementia.

The Alzheimer’s Association projects that related care will cost the U.S. $355 billion in 2021. If current trends continue, the figure could grow to $1.1 trillion by 2050, the organization says.

U.S. Sen. Chris Van Hollen (D-Md), whose father Christopher died of Alzheimer’s in 2013, is championing funding that will increase federal resources for treating Alzheimer’s and work toward finding a cure.

“We have a lot of work to do together. But the first step is making sure that people are aware of what is happening, including (treatment) services that are available,” Van Hollen recently said at a community forum the Alzheimer’s Association conducted virtually for residents of Frederick and Washington counties.

Last July, at the Alzheimer’s Association International Conference, a medical research team presented five discoveries related to Alzheimer’s treatment. They included multiple drugs that were in various phases of clinical trials in the Food and Drug Administration’s approval process, as well as a blood test — hailed as a potential game-changer — that may be able to detect changes in the brain 20 years before Alzheimer’s symptoms occur.

“This is an exciting time in Alzheimer’s and dementia research,” said Megeen White, the program manager for the Alzheimer’s Association’s Greater Maryland Chapter. “Yet, we know we can’t stop or let up. We know we can’t not push for additional funding. The numbers keep going up.”

By 2025, there will be 130,000 Maryland residents living with Alzheimer’s, according to White.

“There is always more progress to be made,” she said.

Even though there was a family history, Leah DuRant seemed like an unlikely candidate for dementia to prey on.

She lived a vibrant, active lifestyle and was dedicated to helping others.

DuRant was a trained nurse after attending Old Dominion University, and she later ran her own business, a fitness club for seniors.

The active lifestyle exacted a price, however, and DuRant underwent hip and back surgeries for wear-and-tear type issues.

The surgeries made her less active physically, and she wasn’t seeing the same number of people she normally would. That allowed the dementia to start creeping in, her son believes.

To help her cope, DuRant and his father will try and keep the mood in the house light, positive and happy. They’ll indulge in the stories she tells, even if they are repetitive or, in some cases, not true.

Though life can be very frustrating for her now, Leah DuRant still has good days and many positive moments, particularly when she is around other people through activities meant to stimulate her mind. The idea of helping other people still clearly drives her.

“My mother is a very empathetic person,” John DuRant Jr. said. “That comes from her being a nurse.”

One of John DuRant Jr.’s favorite stories about treating someone with dementia doesn’t involve his mother.

First, a little background: The DuRants are musically inclined. John DuRant Sr. paid for his college education at Old Dominion partly by performing folk music in the bars and clubs around southern Maryland, southeastern Virginia and northeastern North Carolina — the Tidewater region.

He later had a seven-year, award-winning run as a children’s TV host in the 1990s on a local cable channel in Frederick. His show was called “The Troubadour.”

One day, he set his guitar on the couch and instructed his young son not to touch it. Now, they often share the stage together, regaling audiences at festivals, coffee houses, theaters and pubs with their folksy blend of music.

John DuRant Jr. is a solo artist as well, performing under the moniker, Johnny Strum. He has performed in far-away places — Ireland, France and Russia, among them — and hopes to resume touring once the pandemic ends.

On this particular occasion, he was playing a concert for the memory-care unit at a Frederick nursing home. The song he was playing was “Down in the Valley.” Everyone was singing along.

Down in the valley, Valley so low. Hang your head over, Hear the wind blow.

About halfway through the song, DuRant Jr. noticed that everyone in the room had tears streaming down their faces, and he couldn’t figure out why.

He looked to the corner of the room, where Mrs. Johnson was singing right along with him, word for word.

For many in the room, it was the first time they had seen her express herself verbally. They were amazed.

“That experience changed me, man,” DuRant Jr. said. “That’s part of why we do what we do.”

Similarly, the music the DuRants play can provide therapeutic moments for the woman they love. Leah often attempts to sing along whenever they play around the house.

“Music is a different part of the brain. She definitely perks up,” DuRant Jr. said.

There, in that moment of song, a sense of normalcy is regained and everything feels like it should, even if it’s fleeting.