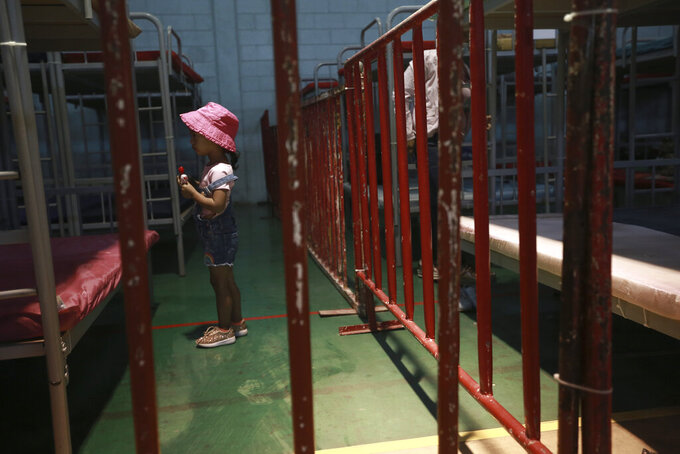 Christian Chavez, ASSOCIATED PRESS
A girl talks to a family at the Kiki Romero Sports Complex migrant shelter after she was deported from the U.S., in Ciudad Juarez, Mexico, Wednesday, April 21, 2021. Mexico said it is planning to set up 17 shelters for underage migrants along the country's southern border, as well as some along the northern border with the United States, amid a wave of child migrants coming from Central America. (AP Photo/Christian Chavez)

MEXICO CITY (AP) — Mexico said Wednesday it is planning to set up 17 shelters for underage migrants along the country’s southern border, as well as some along the northern border with the United States, amid a wave of child migrants coming from Central America.

The shelters will largely be set and run by Mexico’s child welfare agency, which may use some of its own existing day care centers or other facilities.

President Andrés Manuel López Obrador said Wednesday that the situation is “very worrisome” and the expanded capacity was needed to look out for the welfare of the minors.

More of interest to the United States would be the five shelters Mexico may set up along its northern border. The U.S. has been limited in recent months in its ability to return families with children to Mexico, because Mexico doesn't have sufficient shelter capacity to receive them.

In the northern state of Tamaulipas, Mexico's child welfare agency already operates four shelters for unaccompanied minors, which have handled 2,314 children so far this year.

Guadalupe Correa-Cabrera, an associate professor at George Mason University, said “the plan is to give unaccompanied minors shelter that is, so to speak, less aggressive, less complicated.”

But she noted the key will be the financing for the new facilities and the conditions they offer, and whether the U.S. government will help out. She noted there have been allegations of abuses at government-run migrant detention centers in Mexico.

“One thing is the rhetoric and the intentions, but the real funding for the minors and the length of the commitment is another thing,” she said.