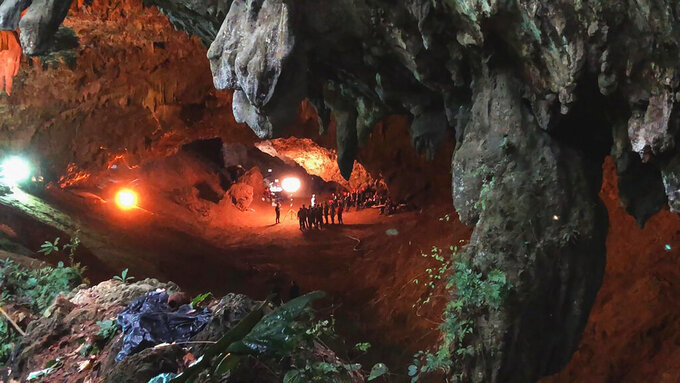 Uncredited, ASSOCIATED PRESS
In this image provided by National Geographic is a scene from "The Rescue" documentary, which chronicles the 2018 rescue of 12 Thai boys and their soccer coach, trapped deep inside a flooded cave. The documentary by directors E. Chai Vasarhelyi and Jimmy Chin opens in theaters in Oct. 2021. (National Geographic via AP)

Their documentary, which premieres Sunday at the Toronto International Film Festival, retraces the 2018 rescue of the youth soccer team from Thailand's Tham Luang cave, detailing the daring underwater maneuvers of an international group of elite cave divers. The National Geographic release, due out in theaters Oct. 8, is a pulse-thumping, nerve-inducing non-fiction standout at the festival and the first major big-screen documentary of a real-life drama that captivated the world.

“It is ironic that we went from these great heights to subterranean,” chuckles Chin, who as a professional climber and skier has typically done his filming around sheer cliffs.

In comparison to Vasarhelyi and Chin's two acclaimed previous films — “Meru" and “Free Solo” — “The Rescue” might seem like an easier task. Most filmmaking that doesn't include dangling off the side of the Shark’s Fin on Meru Peak in the Indian Himalayas, or suspended alongside free-solo rock climber Alex Honnold on the Yosemite granite monolith of El Capitan would, naturally, seem like tamer stuff.

Yet the challenges of “The Rescue” were in many ways steeper. Vasarhelyi and Chin, who are married with two children together, were for the first time not shooting the event itself. They had to track down footage — which included copious news broadcasts from outside the cave but little from within — and piece together a compelling and clear view of a rescue that took place overwhelmingly in cloudy, pitch-black waters.

While the world watched and rain loomed in the forecast, an international coalition of some 5,000 worked tirelessly to free the 12 boys and their coach from the flooded caves, an operation that ultimately relied on the singular cave-diving talents of mostly civilian hobbyists.

“I’ve been to the cave. There are certain things about this story that are really challenging. It’s really hard to conjure the enchantment of the cave,” says Vasarhelyi. “The first two minutes I was in there, I was like, ‘This is terrifying. Why would anyone ever do it?’ And then it’s kind of like this siren. It’s cool, it’s fun, it’s mysterious, it’s a little scary.”

To stitch the story together, the filmmakers, working through the pandemic, relied on interviews over Zoom and recreations carefully shot with the real divers in the U.K. Much of the footage from inside the cave they got from the Thai Navy Seals, who were instrumental in the overall operation but lacked the diving skills to pull off the improbable 2 1/2 hour swims that saved the boys. Those documentary trials, though, aren't visible in “The Rescue,” which with underwater footage and 3D graphic maps makes a murky tale remarkably lucid.

The documentary isn't the only version of the story. On the fiction side, there has already been 2019's little-seen “The Cave,” which featured diver Jim Warny playing himself. Rights to the boys' stories were sold to Netflix, which is plotting a miniseries for 2022. To be released next year by MGM, Ron Howard is also making a drama titled “Thirteen Lives,” with Viggo Mortensen, Colin Farrell and Joel Edgerton.

National Geographic, though, owned the rights to the divers' stories. One thing “The Rescue” thoroughly captures is just how difficult it was to find and reach the boys, and harder still to come up with a plausible path of rescue. Expecting fatalities, on day 16, with the threat of monsoons that would further submerge the cave, the cave divers swam each child out, one at a time, while they were sedated.

For those who casually followed the ordeal, “The Rescue” brings home just how anxious and nail-biting the plot was.

“We just went in and found the boys, according to the media. Then every day we went in and brought the boys out and it all seemed to go without drama. Nobody saw, really, what was involved," says Richard Stanton, the decorated British civilian cave diver who spearheaded much of the mission. “We possibly made it look to easy. This is the first time, apart from maybe our books, that people get to engage with what actually happened and what risky a decision it was and how close to the line it was.”