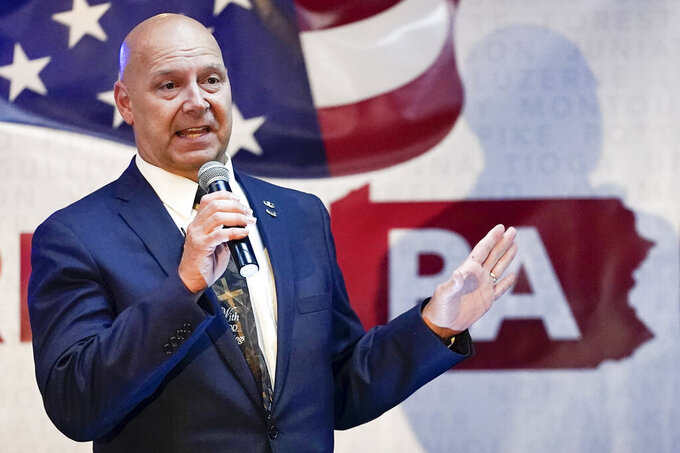 Carolyn Kaster, ASSOCIATED PRESS
FILE - State Sen. Doug Mastriano, R-Franklin, a Republican candidate for Governor of Pennsylvania, speaks at a primary night election gathering in Chambersburg, Pa., May 17, 2022. Mastriano has made a campaign staple out of the allegation that Democratic Gov. Tom Wolf's policy of readmitting COVID-19 patients from hospitals to nursing homes caused thousands of deaths — a baseless claim for which no investigator or researcher has provided any evidence. (AP Photo/Carolyn Kaster, File)

HARRISBURG, Pa. (AP) — Doug Mastriano, Pennsylvania’s Republican nominee for governor, has made a campaign staple out of the allegation that Democratic Gov. Tom Wolf's policy of readmitting COVID-19 patients from hospitals to nursing homes caused thousands of deaths — a baseless claim for which no investigator or researcher has provided any evidence.

In fact, layers of inspections by researchers have pointed to entirely something different — nursing home employees ushering in the virus every day — while investigators found administrators flouting staffing requirements or infection-control procedures.

Further, no Pennsylvania nursing home has leveled any such claim like Mastriano's, and a national nursing home trade association has agreed with the findings of researchers who say the spread of the virus in nursing homes directly correlated to community spread.

Regardless, Mastriano has repeated the unfounded claim in front of friendly audiences, weaponizing COVID-19 in an effort to hurt Democrats in one of the nation’s most important governor’s races in this midterm election cycle.

Mastriano, a state senator and retired U.S. Army colonel who won the Republican nomination while trafficking in conspiracy theories, seemingly came out of nowhere to become a rising force in right-wing politics primarily by leading anti-shutdown rallies in the pandemic's early days.

Opposition to the shutdowns and mask and vaccine mandates are a central plank in Mastriano’s campaign.

It is also a key line of attack for Mastriano against Democrats, including the party's gubernatorial nominee, state Attorney General Josh Shapiro, whose office helped defend Wolf's pandemic policies against court challenges.

In the past two years, new research has piled up on how COVID-19 penetrated nursing homes.

The virus was largely introduced by asymptomatic workers in areas where the virus was heavily transmitted, researchers say.

“Our research has been pretty definitive that the most important factor in determining whether there’s an outbreak in the building is community prevalence, by far,” said Vincent Mor, a professor of health services, policy and practice at Brown University. “Nothing else comes close.”

David Grabowski, a professor of health care policy at Harvard Medical School, echoed that, saying, “I pretty strongly feel that staff were the dominant pathway to COVID entering these buildings.”

In the early days of the pandemic, nursing homes lacked the trained staff, testing supplies and personal protective equipment that could have helped them slow the spread, researchers say.

Nursing home administrators did not know if staff members were asymptomatic. But, they knew that staff had to handle residents returning from hospitals according to infection-control protocols, said R. Tamara Konetzka, a professor of health economics and health services research at the University of Chicago.

In addition, the number of employees coming and going every day from nursing homes — hundreds daily at some facilities — dwarfed the number of readmitted hospital patients, which may have been no more than a handful at each facility in the pandemic's first months, Konetzka and other researchers said.

Some of Konetzka’s research included using cell phone data to track the movements of workers to compare it to the location of outbreaks.

Still, the unproven theory about hospital readmissions came up prominently in Mastriano's May 17 primary victory speech.

Mastriano made it his prime example that Democrats are “extreme” — an attempt to counter criticism, including from some in his own party, that he is too extreme to win the fall general election.

Mastriano went on, saying, “they’re the ones that sent the sick back into the homes. Their policies, Democrat policies, and killed so many. That’s extreme.”

Mastriano, Wolf's office said, is a “science denier” who “put lives in danger throughout the pandemic by openly downplaying the crisis and opposing vaccines and other mitigation efforts.”

Mastriano has seized on a couple aspects of Pennsylvania's handling of the pandemic.

Two, Wolf's administration — like those of several other Democratic governors in hard-hit states — issued orders requiring nursing homes to continue accepting residents returning from hospitals to guard against overwhelmed hospitals.

Last week, Mastriano posted a meme on social media that accuses Wolf and other governors whose administrations issued a similar order of “premeditated murder” — another baseless claim.

Wolf's administration argued that the order also required nursing homes to be able to protect other residents and that it worked with nursing homes that had concerns, it said.

In any case, readmissions were routine in every state and nursing homes were given guidance early on by the federal government and trade associations on how to handle hospital readmissions.

That's because, in every state, hospitals had to off-load recovering patients to ensure they had beds for incoming patients, researchers say.

A Department of Justice inquiry begun in 2020 into those orders — during the final stretch of the presidential campaign under former President Donald Trump — ended quietly under President Joe Biden last summer.

Researchers pointed out that states that got hit by the pandemic after Pennsylvania were still unable to protect their nursing home populations, even though they’d had more warning and didn't have a policy of ordering nursing homes to accept readmissions.

COVID-19's spread in nursing homes “was much a bigger problem than any policy could have caused,” Konetzka said.