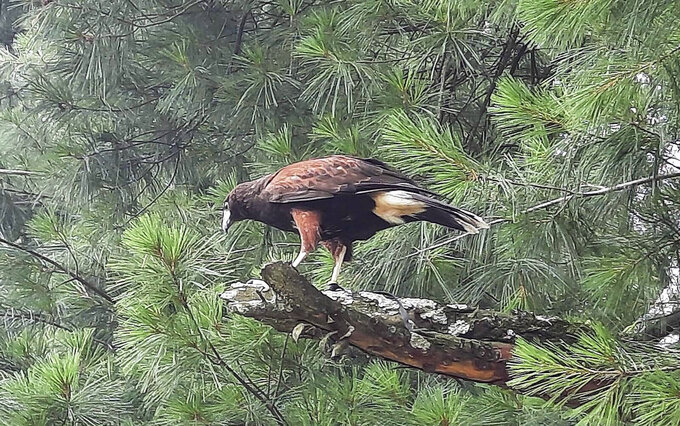 Brian Whipkey, ASSOCIATED PRESS
A Harris' hawk waits for a command from Jack Hubley at "The Falconry Experience" on July 8, 2021, in Hershey, Pa. Falconry is a sport where a hunter partners with a bird of prey such as a hawk to pursue game animals such as squirrels and rabbits in Pennsylvania. It’s not something just anyone can do. It’s highly regulated, and there are many requirements to care for a bird of prey, which can include eagles. (Brian Whipkey/Daily American via AP)

SOMERSET, Pa. (AP) — A hunting bond between humans and birds dating 4,000 years continues in Pennsylvania. Across the commonwealth, the Game Commission has 207 active permits for people who enjoy falconry.

Falconry is a sport where a hunter partners with a bird of prey such as a hawk to pursue game animals such as squirrels and rabbits in Pennsylvania.

It’s not something just anyone can do. It’s highly regulated, and there are many requirements to care for a bird of prey, which can include eagles.

He said there’s an exam that needs to be taken to test your knowledge on care, feeding and husbandry. You also need to have the facilities to safely keep a raptor.

When you factor in the time, commitment and responsibility that comes with caring for a bird of this caliber, he said, “It’s a lifestyle for these folks.”

One of those people is Jack Hubley. He spends his days educating people about birds of prey through “The Falconry Experience” at the Hotel Hershey, part of the Hersheypark resort.

He’s a master falconer who can hunt with hawks and eagles, and he also holds a federal falconry education permit. The program for the public doesn’t involve falconry, which is actually hunting. It’s about educating the public about these birds and how they are able to be trained to hunt with humans.

“We bring the public together with wild birds of prey,” he said about helping people understand this part of our heritage where humans and birds worked together to provide meat for their families.

Hubley pointed out you need a federal education permit to have the public interact with raptors and there are only eight to 10 of these permits in the northeast region of the United States.

“Falconry is the most highly regulated field sport in the country,” he said. If you want to be a falconer, there are many hurdles you need to cross before you are permitted to have a hawk.

Here’s what need to do to become a falconer:

First, like any other hunter, you have to pass the hunter’s safety course through the Pennsylvania Game Commission. Then you have have to find another falconer to write a letter endorsing or sponsoring you. That’s not easy to do because the falconers are putting their own names and reputations on the line when they endorse someone.

If you are fortunate to find a sponsor, then you have to take a written test about your knowledge of birds and their care. If you pass that test, you can schedule a game warden to inspect your hawk house – called a mew – which is where the bird will live.

Hubley also pointed out you will need a letter from your municipality approving you to have a bird of prey on your premises.

If that is accomplished, you can become an apprentice for two years. To have a hawk, apprentices must catch a wild hawk through the help of their falconer sponsor. “It’s an apprentice’s first bird and maybe their last bird,” he said about the length of time people care for the animal.

The process then involves taking a wild bird that is 6 or 7 months old to the point where it’s flying through the tree tops following you. “It’s a miracle to me,” he said.

He said in a relatively short time, the hawk will be watching the hunter flush game out of brushy areas for it to catch.

Hubley said it’s all about teaching the birds that humans aren’t dangerous. The training involves educating them to fly to the falconer’s leather glove where a meat treat awaits.

“If they come to us, they get what they value above all else, meat,” he said.

When he is coming unfailingly to the glove, it’s time to let him loose, he said about taking the training into the wild.

The birds are also trained to a lure, which is an animal facsimile that’s pulled on a cable across a field. A video of his demonstrations is attached to the online version of this story.

Some people release their wild birds in the spring after the hunting season is over. He said it’s actually a helpful experience for the birds as the falconer helps the animal hone its hunting skills, and that increases the bird’s chances of survival.

A red-tailed hawk can live more than 10 years in the wild and up to 20 years in captivity.

Having more birds is not always the answer or goal. “It’s so intensive, one bird flown frequently and flown well will keep you busy,” he said.

With the development of firearms, falconry has been relegated to hobby status. Today substantially less than 1% of hunters in Pennsylvania engage in falconry. “It’s a serious commitment,” he said about the training and care required for this activity.

Hubley enjoys falconry for the educational value. “It’s important to me that we remember our roots, where we came from,” he said. “It helped feed us. It’s a craft to be preserved.”

While it’s not for everyone, he said, “It’s important to remember where you came from.

“This is our heritage. ... I certainly don’t hope it goes away.”

For more information about falconry, visit the Pennsylvania Falconry and Hawk Trust online at pfht.org to connect with falconers close to your home.