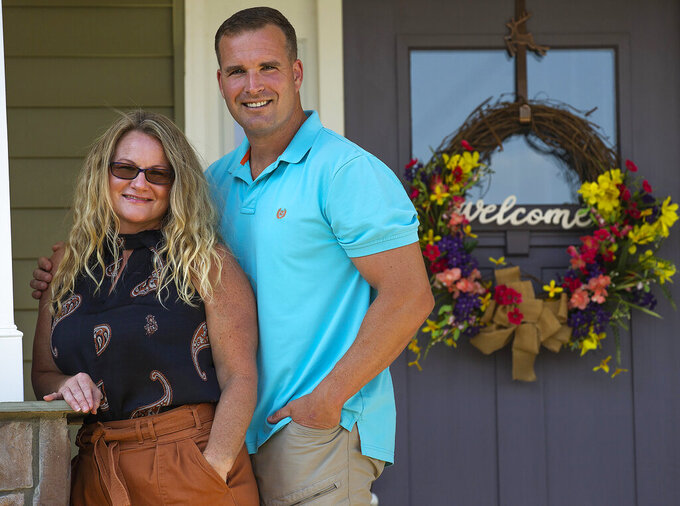 Peter Cihelka, ASSOCIATED PRESS
In this Sept. 2021 photo, Spotsylvania County, Va., residents Marine Lt. Col. Breck Perry and his wife Adrian helped his Afghan interpreter and family escape Afghanistan as the Taliban were overtaking the country. E.Z. is one of thousands of Afghan nationals who served alongside U.S. forces as linguists, interpreters and scouts during 20 years of military operations in Afghanistan. All are eligible for an easier way to American citizenship for their service to the U.S., through the Afghan Special Immigration Visa program. (Peter Cihelka/The Free Lance-Star via AP)

“E.Z. was our platoon linguist,” said Perry, who is now stationed at Marine Corps Base Quantico. “I developed a friendship with him and I trusted him. He got us out of a couple of tight spots.”

E.Z. is one of thousands of Afghan nationals who served alongside U.S. forces as linguists, interpreters and scouts during 20 years of military operations in Afghanistan. All are eligible for an easier way to American citizenship for their service to the U.S., through the Afghan Special Immigration Visa program.

Critics say the SIV program, launched in 2009, has had missteps since its creation and the delays in processing applications have led to lapses in medical paperwork and passports. This has left thousands of SIVs with no way out of Afghanistan, and now there are no U.S. forces on the ground to support them.

“They weren’t wanting to come to the U.S. because they believed in their country and the U.S. commitment to them,” said Fredericksburg immigration attorney Jennifer Cervantes. “But now that the U.S. is abandoning them, now they are turning to us, applying for these visas.”

Perry said E.Z., who applied for his special visa in 2008, served with both the U.S. Army and the U.S. Marines Corps until 2012. Although it only took one year for E.Z. to receive authorization for a face-to-face interview for his visa, that appointment didn’t get approved until four years later.

By that time, E.Z.’s medical records had lapsed and he had to begin the lengthy application process from scratch.

In January 2019, Perry submitted a package to Virginia Sen. Mark Warner requesting the status of E.Z.’s SIV application. After leaving Japan for a transfer to Quantico the following year, Perry and his wife Adrian, who live at Fawn Lake in Spotsylvania County, reached out to Rep. Abigail Spanberger seeking additional help.

“They said he needed another letter of recommendation and I had already submitted probably eight letters to him,” said Perry. “But they needed something else.”

Perry said a worker on Spanberger’s staff worked 21 hours a day for nearly two weeks until finally receiving a departure approval for E.Z. and his family of eight. Leading up to that departure, Perry and his wife both knew getting the whole family to the largely Taliban-occupied airport would be a challenge.

“Anything coming into the airport, they were choking people off,” said Perry. “You get one shot at it. You fail and you’re dead.”

But even though Spanberger’s staff set the stage for E.Z.’s family to board an airplane through a designated gate, the challenge in reaching the airport proved too great for the family, who ultimately had to turn back.

Perry, who learned the Marines had secured the airfield at Hamid Karzai International Airport, then turned to social media seeking someone affiliated with that group who might be able to help get his friend and family safely out of the country.

Perry soon connected with a Marine who assisted in developing an escape route through connections the Marine had in Afghanistan. Perry and his wife had to rely on relatives and friends of E.Z., who mapped out routes for the family on foot and in taxis, through back roads and alleys to avoid Taliban checkpoints.

“I was on Google Earth pulling up imagery to see his home (in Kabul) in reference to the (airport) Abbey Gate and see what kind of terrain he had to navigate in order to get to that link-up point,” said Perry.

The route proved successful and just two weeks before the Aug. 26 bombing at Hamid Karzai International Airport, the family successfully boarded a plane and left the country. Today, they are living with other Afghan refugees at a Virginia military base.

Sharif Sharafat, who came to the U.S. in 2013, previously served as an interpreter and cultural advisor for U.S. forces in Afghanistan. He is one of the founders of Afghan Foundation USA, and is now working overtime bringing personal items and clothing to Afghans temporarily housed at military bases in Virginia.

“Right now, what they are doing, they have nothing,” Sharafat said of the refugees. “No clothes, no money, nothing.”

Through the efforts of a group of former Afghan interpreters that spans from Richmond to Washington, Sharafat’s group is trying to bring some comfort to Afghan nationals new to the U.S. at places such as Fort Lee in Prince George County. He’s gathering items that include clothing, prayer rugs, personal hygiene products, diapers, sanitary wipes.

Sharafat said potential donors can reach him at 540-479-0227. A volunteer will pick up and deliver the items, he said.

Adrian Perry said the culture of the Afghan people should be considered when making clothing donations.

“It’s a culture shock, especially for the females,” said Perry. “They’re not just ready to jump into American clothing. I think we need to be culturally sensitive to that.”

Perry and officials at Quantico said the community answered the call last month by bringing goods and clothing to refugees who are living on the base after the Department of Defense announced that the Marine base in North Stafford, Prince William and Fauquier counties would house about 5,000 Afghan refugees.

Perry said most of the refugees made the journey with nothing except the clothes on their backs.

“A lot of the Afghans had to cross through a canal to get to the airport,” said Perry. “Their shoes and socks were wet. If they were carrying anything, they had to leave it.”

Capt. Michael Curtis, communication strategy and operations officer at Quantico, said although the base has stopped accepting donations, Team Rubicon, a disaster response nonprofit organization, is coordinating the distribution of items already received and is preparing for additional donations.

“We’re trying to find a warehouse to open as a receiving site,” said Michael Brady, a field leadership member with Team Rubicon. “We’re at our capacity to receive at the moment, but we’re looking to expand and receive from the public at a place they can get to.”

Brady said his organization is looking for a facility that can offer about 5,000 square feet of floor space with a loading dock. He said an updated list of items needed for the refugees, as well as the site of the new receiving location will be added to TeamRubiconUSA.org/resettlement soon. Brady anticipates a need for blankets and tennis shoes soon, as temperatures begin to drop for the fall season. He also said cash donations are welcome, allowing his team to purchase new items the refugees will need.

Sharafat said his group of interpreters is also trying to teach new arrivals the basics of living in America, including how to communicate, what to expect at a doctor’s appointment, and even where not to smoke a cigarette.

“In Alexandria, people were smoking inside a hotel and the fire alarm went off,” said Sharafat. “These are the things you’re supposed to learn.”

But Sharafat said he tells Afghans to be organized and not rush while in America. He said his country has gone through centuries of war and many people new to America from Afghanistan have lived with war their entire lives.

“It doesn’t mean those people are uncivilized. Those people are civilized,” said Sharafat. “We had democracy before the existence of the United States.”