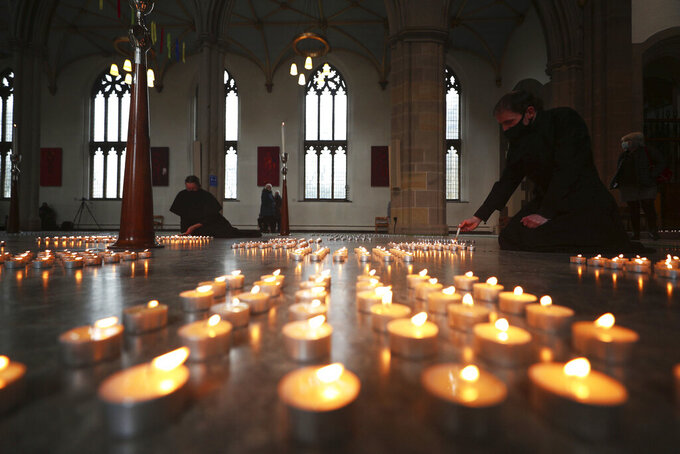 Peter Byrne, ASSOCIATED PRESS
Candles are lit during the National Day of Reflection at Blackburn Cathedral, on the anniversary of the first national lockdown to prevent the spread of coronavirus, in Blackburn, England, Tuesday March 23, 2021. The U.K. has a lot to reflect on a year after British Prime Minister Boris Johnson first announced that the country would go into lockdown to slow the fast-spreading coronavirus. A national day of reflection taking place on Tuesday will remember more than 126,000 people who died after contracting the virus. (Peter Byrne/PA via AP)

LONDON (AP) — For Britain, it has been a year of agonizing numbers.

Since Prime Minister Boris Johnson plunged the country into lockdown on March 23, 2020, to slow the spread of the coronavirus, the U.K. has seen its highest surge in deaths since World War II and its deepest economic slump in 300 years. On a more positive note, Britain is now rolling out its fastest vaccination campaign on record.

Here are some of the figures from Britain’s pandemic year:

— National lockdowns in England: 3, covering more than half of the year

— Officially recorded COVID-19 deaths: 126,172, the highest toll in Europe and fifth-highest in the world

— Growth in number of people unemployed in January from a year earlier: 360,000

— Furloughed employees, the bulk of whose wages were temporarily paid by the government: 11.2 million