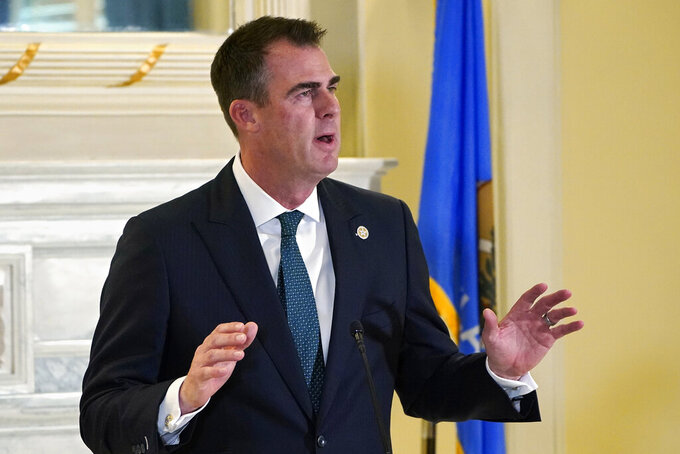 Sue Ogrocki, ASSOCIATED PRESS
FILE - Oklahoma Gov. Kevin Stitt speaks at a news conference Friday, April 29, 2022, in Oklahoma City. Stitt has signed a bill requiring public school students to use only the bathroom of the sex listed on their birth certificate. The bill was overwhelmingly approved last week by the Republican-controlled Legislature. It was proposed after Stillwater Public Schools declined to change a policy that allows students to use the bathroom that agrees with their gender identity. (AP Photo/Sue Ogrocki, File)

OKLAHOMA CITY (AP) — Oklahoma Gov. Kevin Stitt has signed a bill requiring public school students to use only the bathroom of the sex listed on their birth certificate.

About a dozen conservative states have passed laws targeting the transgender population over bathroom use, participation in school sports, and gender-affirming treatments or surgery for young people.

The bill passed overwhelmingly in the Republican-controlled House and Senate last week, and Stitt signed it on Wednesday.

“It’s about safety, it’s about protection, it’s about common sense,” said Republican Rep. Danny Williams, the House author of the bill. “The goal of this bill is to protect our children.”

Democrats who opposed the bill said it singles out and targets transgender students, putting them at risk of ridicule.

The bill was proposed after Stillwater Public Schools declined to change a policy allowing students to use the bathroom that agrees with their gender identity unless forced by law to do otherwise.

Nicole McAfee, executive director of Freedom Oklahoma which supports the rights of lesbians, gays, bisexuals, transgender and queer people, said the bill violates federal law and she is discussing legal action with other organizations, including the ACLU and Lambda Legal.

“This law is unconstitutional, a violation of Title IX of the Civil Rights Act, and more than anything it is unnecessarily cruel for the sake of cruelty," McAfee said in a statement. “Over the last day we’ve heard people talk about school safety over and over again. But with a flick of his pen, Governor Stitt said that safety doesn’t extend to already vulnerable transgender and Two Spirit young people."

Stitt, a Republican running for reelection, earlier this year signed bills to prevent transgender girls from playing on female sports teams in public schools or universities and to prohibit transgender people from changing their birth certificate.