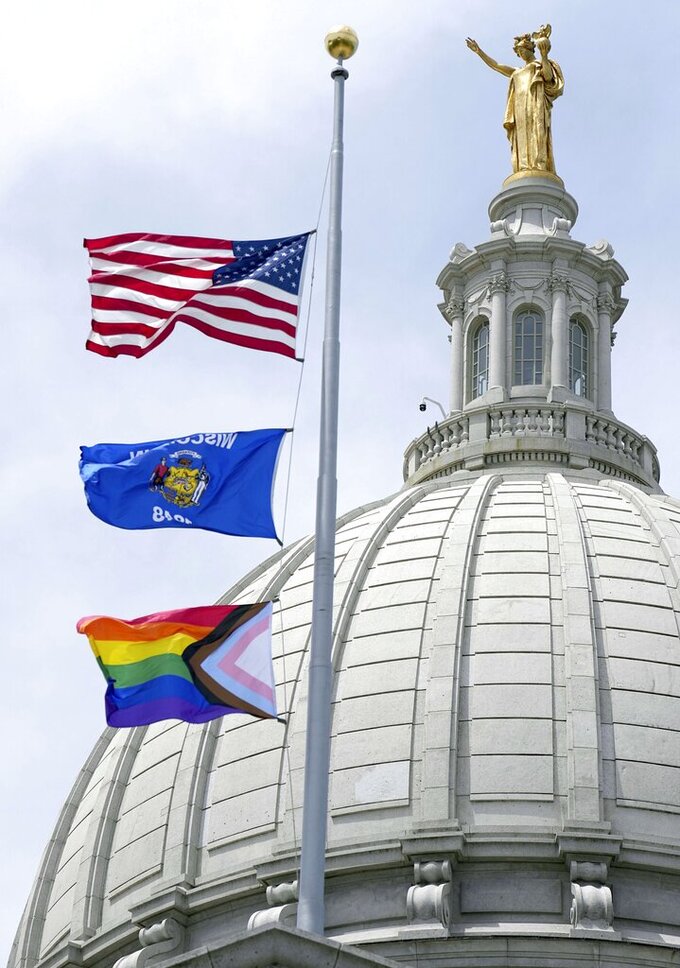 Mark Hoffman, ASSOCIATED PRESS
FILE - In this Wednesday, June 1, 2022, photo, a Rainbow Pride flag is raised at the Capitol in Madison, Wis. A Wisconsin school board has voted in favor of a policy that prohibits teachers and staff from displaying gay pride flags and other items that district officials consider political in nature. (Mark Hoffman/Milwaukee Journal-Sentinel via AP, File)

WALES, Wis. (AP) — A Wisconsin school board voted in favor of a policy that prohibits teachers and staff from displaying gay pride flags and other items that district officials consider political in nature.

The Kettle Moraine School Board voted Tuesday to keep a code of conduct in place that the superintendent recently interpreted as forbidding district employees from displaying political or religious messages, including pride flags, and Black Lives Matter and We Back the Badge signs. Staff also may not say in emails what their preferred pronouns are.

Superintendent Stephen Plum recently told the board that the district’s interpretation of a policy that prohibits staffers from using their positions to promote partisan politics, religious views and propaganda for personal, monetary or nonmonetary gain changed following a legal analysis.

Jim Romanowski was the only board member to vote against the ban, saying he changed his mind about the policy after hearing from students and staff.

Most of those who spoke at Tuesday's packed board meeting opposed the policy. The public comment period was capped at an hour, despite a call from the crowd to extend it.

“If you have a policy that says ‘nothing political,’ does that mean you can’t have a sign up that says, ‘Support our Troops,’ or ‘Believe Women’ or ‘Save the Planet?’ By some people’s definitions, all of those things are political,” said Christine Donahoe, an attorney with the American Civil Liberties Union of Wisconsin.

Donahoe said she’s looking closely at the policy and a similar one approved last fall by the school district in nearby Waukesha.

“It really looks like targeted attacks at specific viewpoints, like LGBT communities, or welcome and safe spaces to students of color,” said Donahoe.

“Having a rainbow flag in your room isn’t pushing your beliefs on someone,” Provan told WITI-TV. “It’s just saying, ‘Hey, you’re welcome here, and we support you.’”

This story has been corrected to show that the vote was not unanimous and board member Jim Romanowski was the only no vote.