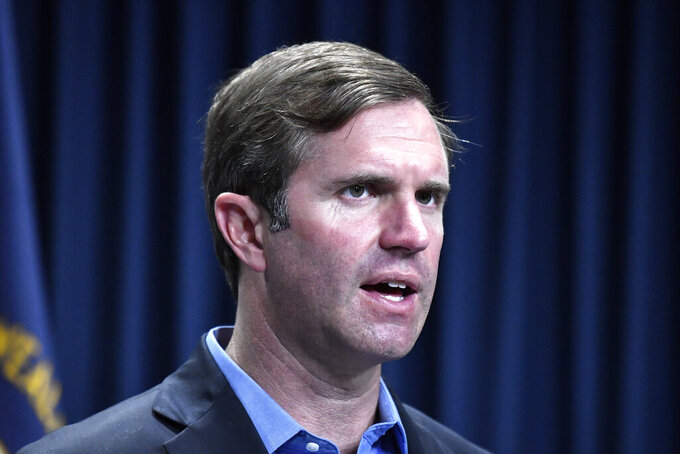 Timothy D. Easley, ASSOCIATED PRESS
FILE - In this Tuesday, Sept. 7, 2021, file photo, Kentucky Gov. Andy Beshear speaks about the increases in COVID-19 cases in the state and the opening day of the Kentucky State Legislature special session in Frankfort, Ky. Kentucky lawmakers grabbed the quarterback role to direct the response to COVID-19, but when it came time to lead, the GOP-led legislature “punted” the decision on mask-wearing in schools to local school boards, Beshear said Friday, Sept. 10. (AP Photo/Timothy D. Easley, File)

FRANKFORT, Ky. (AP) — Kentucky lawmakers grabbed the quarterback role to direct the response to COVID-19, but when it came time to lead, the GOP-led legislature “punted” the decision on mask-wearing in schools to local boards, Democratic Gov. Andy Beshear said Friday.

A day after a special legislative session ended, Beshear gave a blistering response to the legislature's decision to halt statewide mask mandates to combat Kentucky's worst surge of the coronavirus pandemic. He declared that the legislature “owns this pandemic moving forward.”

The legislature passed bills Thursday that scrapped a statewide mask mandate for public schools and imposed a ban on any statewide mask rules until June 2023. Beshear vetoed the mask-related language but Republican lawmakers overrode him before ending their three-day session.

“The masking decision the General Assembly made was wrong. And it was also a punt," Beshear told reporters. "I’ve been willing to make the calls, to take the hits, to make the plays. And the legislature asked to go in ... at QB. And what did they do? They punted on first down. When you’re in charge, it means you’ve got to make the decision. This one was to push the decision to others.”

The governor said he would have ordered mask-wearing in indoor public places if he still had the authority to do so. The special session marked a power shift in the state’s response to the virus.

Republican lawmakers asserted their new dominance in setting Kentucky’s pandemic policies — the result of a state Supreme Court ruling last month. The court cleared the way for GOP-backed laws to take effect limiting the governor’s emergency powers to impose virus restrictions. The governor responded by calling the legislature into session.

Supporters of ending the statewide school mask requirement said those decisions are best left to local school boards, to reflect the will of their communities. They said they have confidence in the ability of local school leaders to set those rules.

Asked what his message would be to school districts, the governor made the case for local masking requirements. It's the “best way” to keep children learning in classrooms, he said.

“There is only one decision, one right answer where you don’t endanger children and your entire community," he said. "This thing is burning through Kentucky like nothing that we have ever seen.”

Many lawmakers weren't wearing masks when they voted to block statewide masking rules — which the governor noted at his news conference Friday.

“You can’t say you’re pro-mask while refusing to wear one in a crowded room,” he said.

Beshear praised other actions taken during the special session, including the extension of the pandemic-related state of emergency. That continues a number of actions taken by the governor to combat COVID-19. Examples include waiving licensing requirements for out-of-state medical providers and preventing price gouging.

The legislature also passed a measure to appropriate more than $69 million in federal funds for pandemic-related efforts. The funds are aimed at increasing COVID-19 testing for health care providers, schools, health departments and correctional facilities.

And lawmakers voted to tap into budget reserves to offer lucrative incentives to try to land economic development projects topping $2 billion. Beshear, who requested the measure, has said the state is pursuing at least five projects of that magnitude.