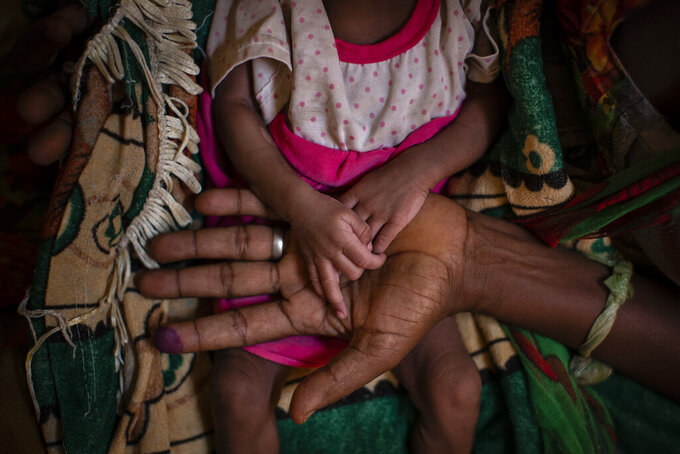 Ben Curtis, ASSOCIATED PRESS
Abeba Gebru, 37, from the village of Getskimilesley, holds the hands of her malnourished daughter, Tigsti Mahderekal, 20 days old, in the treatment tent of a medical clinic in the town of Abi Adi, in the Tigray region of northern Ethiopia, on Tuesday, May 11, 2021. (AP Photo/Ben Curtis)

UNITED NATIONS (AP) — A report issued Thursday warns that over 350,000 people in Ethiopia’s Tigray province are facing famine and over 2 million are just a step away, blaming the dire situation on the ongoing conflict that has forced hundreds of thousands of people to flee, limited humanitarian access and the loss of harvests and income.

The report said the 350,000 people represent the largest number of people facing famine since the 2011 famine in Somalia.

It projects that between July and September the number of people facing famine will rise to over 400,000.

The Integrated Food Security Phase Classification known as the IPC, which is a global partnership of 15 U.N. agencies and international humanitarian organizations, prepared the report. It uses five categories of food security from people who have enough to eat to those facing “Famine-Humanitarian Catastrophe.”

In that worst category now confronting more than 350,000 people in Tigray, at least 20% of households face a complete lack of food “and starvation, death and destitution are evident.” In addition, acute malnutrition is evident in more than 30% of households and deaths from starvation exceed two people per 1,000 population every day.

The report says over 2 million Tigrayans are just a step below in the “Humanitarian Emergency” category characterized by extreme gaps in food consumption, acute malnutrition and excess mortality in at least 20% of households. And more than 3 million Tigrayans in the “crisis” category are just below that.

U.N. humanitarian chief Mark Lowcock told a virtual high-level meeting on the humanitarian emergency in Tigray organized by the U.S. and European Union on Thursday that “there is famine now” in the region, and warning that “this is going to get a lot worse.”

But Lowcock told representatives from the Group of Seven major industrialized nations and EU that “the worst can still be avoided” if action is taken to help Tigray now.

He said it’s crucial to prevent a re-run of the 1984 famine in Ethiopia, which “would have wide-ranging and long-lasting ramifications."

“My message is: don’t go there,” Lowcock said.

David Beasley, head of the U.N. World Food Program, the world’s largest humanitarian organization, called the new data “alarming” and said the lack of data from western Tigray in the analysis is “deeply worrying.” Forces from the neighboring Amhara region have reportedly attacked civilians and taken control of areas in western Tigray.

WFP has mounted an emergency operation and increased food distribution to reach 1.4 million people, Beasley said, “yet that is barely half of the number we should be reaching,” and other agencies are struggling as well.

The largely agricultural Tigray region of about 5 million people already had a food security problem amid a locust outbreak when Prime Minister Abiy Ahmed on Nov. 4 announced fighting between his forces and those of the defiant regional government. Tigray leaders dominated Ethiopia for almost three decades but were sidelined after Abiy introduced reforms that won him the Nobel Peace Prize in 2019.

No one knows how many thousands of civilians or combatants have been killed. More than 50,000 have fled into neighboring Sudan. Though Abiy declared victory in late November, Ethiopia’s military and allied fighters remain active including troops from neighboring Eritrea, a bitter enemy of the now-fugitive officials who once led Tigray, despite claims by Ethiopia and Eritrea that they were leaving.

Beasley said WFP teams report that in 53 villages they visited, 50 percent of mothers and almost a quarter of children they’ve been screening are malnourished, and without food urgently, “many of them will die.”

He said three things are needed to prevent hunger from claiming millions of lives in Tigray: “a ceasefire, unimpeded access for WFP and partners to all areas, and the money to expand our operations to meet the growing numbers of people who desperately need emergency food assistance.”

Oxfam, one of the partners, echoed his appeal for an end to the violence, unconditional and safe access to all areas for humanitarian workers, and funds for the U.N.’s $853 million appeal for northern Ethiopia.

Emily Farr, Oxfam’s emergency food security adviser, said that after drought, locusts, losing their property, cattle and food stocks, “the stresses now hitting local economies and livelihoods caused by the COVID-19 pandemic” are “potentially the last straw for many” in Tigray.

U.S. Ambassador Linda Thomas-Greenfield told the US-EU meeting that the United States is the largest bilateral donor to Ethiopia for the current humanitarian response which is “woefully underfunded” and urged additional funding.

“We cannot make the same mistake twice,” she said, referring to the 1984 famine. “We cannot let Ethiopia starve. We have to act now.”