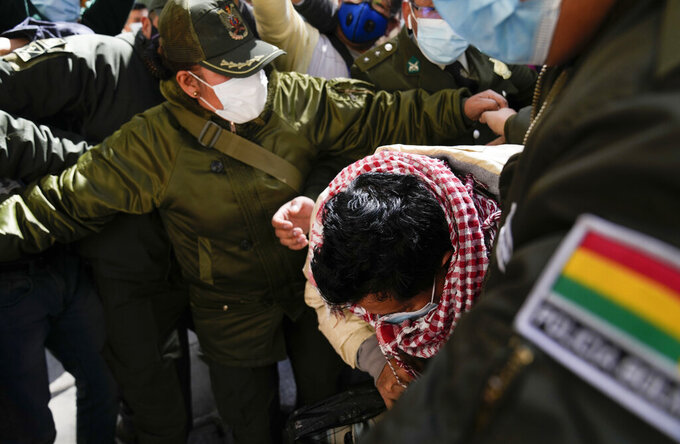 Juan Karita, ASSOCIATED PRESS
Max Mendoza is escorted in handcuffs by police to San Pedro jail in La Paz, Bolivia, Monday, May 23, 2022. The 52-year-old was detained and sent to jail on Monday after a judge ordered a six-month investigation into allegations his tenure as a state-paid student leader constituted a crime. (AP Photo/Juan Karita)

LA PAZ, Bolivia (AP) — Max Mendoza has been a remarkably persistent student — and a profitable one: He's been enrolled at a public university in Bolivia for 32 years but never graduated, much of it while being paid a government salary to serve as a student leader.

On Monday, though, he was detained and sent to jail after a judge ordered a six-month investigation into allegations his tenure as a state-paid student leader constituted a crime.

Mendoza, now 52, has unsuccessfully tackled a series of majors — industrial engineering, agronomy and law among them — since entering a university in 1990. But he has held a series of student leadership posts and since 2018, he has been president of the University Confederation of Bolivia, the country's top student representative, earning $3,000 a month — 10 times the national minimum wage.

Prosecutors say he used the closure of schools for the COVID-19 pandemic as an excuse to extend his position.

“He didn't meet the requirements. He didn't have a bachelor's degree (needed) to hold the post," Judge Javier Vargas said Monday. Prosecutor William Alave said other long-serving student leaders were also being investigated.

Critics complain that those leaders have taken advantage of the broad autonomy granted Bolivian public universities to hold onto government pay granted to student leaders.

Public anger at the situation rose after somebody threw a gas grenade into a student assembly in the city of Potosi this month and caused a stampede in which four students died. Many suspect the attack was meant to head off new student elections.