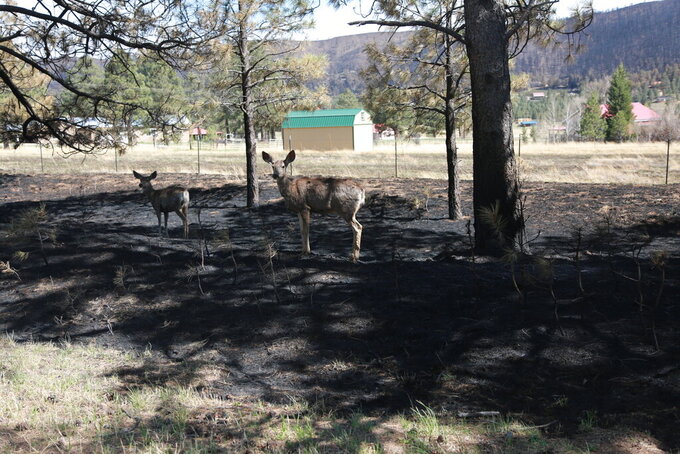 Cedar Attanasio, ASSOCIATED PRESS
A pair of deer are seen grazing by a burn scar following a wildfire near Las Vegas, New Mexico, on Monday, May 2, 2022. Wind-whipped flames are marching across more of New Mexico's tinder-dry mountainsides, forcing the evacuation of area residents and dozens of patients from the state's psychiatric hospital as firefighters scramble to keep new wildfires from growing. The big blaze burning near the community of Las Vegas has charred more than 217 square miles. (AP Photo/Cedar Attanasio)

SANTA FE, N.M. (AP) — Firefighters have rescued an abandoned newborn elk calf found amid the ashes of the nation's largest wildfire as calving season approaches its peak in New Mexico and fires rage across the American West.

Missoula, Montana-based firefighter Nate Sink said Tuesday that he happened upon the motionless elk calf on the ground of a fire-blackened New Mexico forest as he patrolled and extinguished lingering hot spots.

“The whole area is just surrounded in a thick layer of ash and burned trees. I didn’t think it was alive,” said Sink, who was deployed to the state to help contain a wildfire that by Wednesday had spread across 486 square miles (1,260 square kilometers) and destroyed hundreds of structures.

It's is one of five major uncontained fires burning in New Mexico amid extremely dry and windy conditions. More than 3,000 firefighters battling the biggest blaze have made significant progress halting its growth in recent days ahead of more dangerous fire conditions forecast to return into the weekend, crew commanders said Wednesday night.

Wildlife officials in general discourage interactions with elk calves that are briefly left alone in the first weeks of life as their mothers forage at a distance. Sink says he searched diligently for traces of the calf's mother and found none.

The 32-pound (14.5-kilogram) singed bull calf, dubbed “Cinder,” was taken for care to a nearby ranch and is now regaining strength at a wildlife rehabilitation center in Espanola, north of Santa Fe.

Veterinarian Kathleen Ramsay at Cottonwood Rehab says she paired Cinder with a full-grown surrogate elk to be raised with as little human contact as possible.

“They do elk things, they don't do people things,” said Ramsay, noting Cinder arrived at a tender days-old age with his umbilical cord still attached.

Ramsay said the calf hopefully can be released into the wild in December after elk-hunting season. The strategy has worked repeatedly with elk tracked by tags as they rejoined wild herds.

The calf's rescue was reminiscent of events 70 years ago in New Mexico involving a scalded black bear cub and the fire prevention mascot “Smokey Bear.”

The U.S. fire-safety campaign took on new urgency in 1950 with the rescue by firefighters of a black bear cub that was badly burned by wildfire in southern New Mexico. The cub — named Smokey Bear after the mascot — recovered and lived at the National Zoo until its death in 1976.

Wildfires have broken out this spring in multiple states in the West, where climate change and an enduring drought are fanning the frequency and intensity of forest and grassland fires.

Crews battling the biggest U.S. fire in northern New Mexico took advantage of one last day of favorable weather Wednesday before hotter, drier and windier conditions are forecast to return late Thursday and continue to worsen into next week.

“All across the fire, we're making a lot of really good progress over the last few days,” incident commander Carl Schwope said at a briefing Wednesday night.

“We do have some more critical fire weather moving in ... starting now and getting warmer and drier throughout the weekend. (But) feeling real confident that we are ahead of the curve on that,” he said.

Bruno Rodriguez, an inter-agency meteorologist assigned to the fire, said gusts should continue to increase by about 5 mph (8 kph) per day, from 25 mph (40 kph) Thursday to as strong as 50 mph (80 kph) by Monday.

“It's definitely going to be a critical fire weather pattern and unfortunately it's going to be fairly prolonged and persistent,” he said.