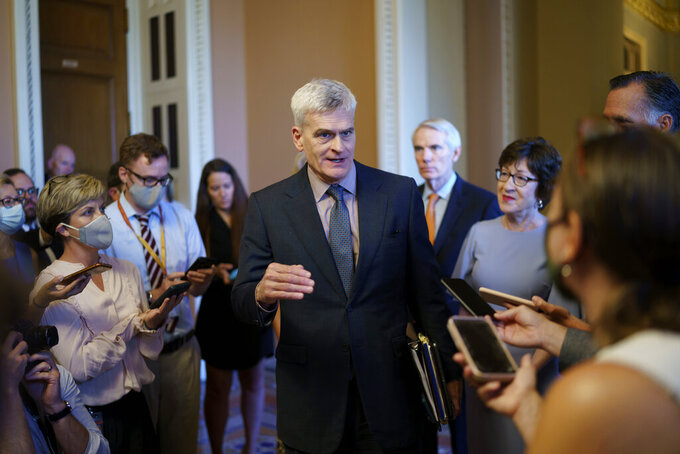 J. Scott Applewhite, ASSOCIATED PRESS
Sen. Bill Cassidy, R-La., center, and other Senate Republicans negotiating a $1 trillion infrastructure bill with Democrats, announce they have reached agreement on the major outstanding issues and are ready to vote to take up the bill, at the Capitol in Washington, Wednesday, July 28, 2021. (AP Photo/J. Scott Applewhite)

BATON ROUGE, La. (AP) — Louisiana could see a huge infusion of federal cash to chisel away at its multibillion-dollar backlog of road and bridge work under the $1 trillion infrastructure bill that U.S. Sen. Bill Cassidy helped to negotiate. But Cassidy's left selling the proposal to Louisiana's residents on his own, unable to win over his fellow Republican colleagues in the state's congressional delegation.

“It will create all kinds of jobs. It will help Americans and those of us in Louisiana tired of long commutes. It will help with flood protection. It will help with coastal restoration, weatherization of homes, many other things,” Cassidy said after he was among 19 Republicans who voted with Senate Democrats for the measure.

Much of the rest of Louisiana's congressional delegation is denouncing the bill or at least plans to vote against it, though without slamming Cassidy directly for his involvement.

Republican U.S. Sen. John Kennedy voted against the legislation in the Senate. Most of the state's GOP U.S. House members — Clay Higgins, Mike Johnson, Julia Letlow and Steve Scalise — have indicated they'll do the same when it comes up for a House vote. Republican U.S. Rep. Garret Graves is a bit iffier on his position.

With his willingness to work on a prominent bipartisan compromise with Democrats and President Joe Biden's administration, Cassidy's positioned himself at the negotiating table for some of Washington's most high-profile debates.

That's not necessarily drawing accolades within his own party. Rather, Cassidy's seeing more praise from Democrats.

Without naming Cassidy directly, Kennedy said supporters of the infrastructure measure misled the public about what’s included. He said claims of how much Louisiana would receive are inflated. And he criticized the measure as deepening the nation’s debt.

Being at odds with other Republicans in his deep red state isn't an unfamiliar position to Cassidy. The doctor from Baton Rouge drew public anger and condemnation within GOP ranks after voting to convict former President Donald Trump in his second impeachment trial.

But Cassidy might have hoped that helping to craft an infrastructure bill with billions for Louisiana could prove to be a little less controversial, particularly since such measures once were the backbone of congressional lawmaking.

Cassidy said Louisiana will receive more than $6 billion from the bill for roadwork and $371 million for water system improvements. He said the state will share in money for airport upgrades, ports, rail projects, broadband internet, flood mitigation, levee work and more.

“I will not support the so-called ‘infrastructure’ bill because only a fraction of its $1.2 trillion price tag will actually be spent on infrastructure, while the vast balance will go to unrelated so-called ‘green energy’ projects and increased deficit spending that will hurt Louisiana," Johnson said in a statement.

Higgins issued a statement that said: “Anyone who says this bill is about traditional infrastructure is lying. There’s socialist horror buried within the 2,700 pages. This is a losing deal for Louisiana.”

Letlow told The News-Star she can't support the bipartisan infrastructure bill because House Democrats have linked passage to a separate $3.5 trillion budget bill that would be paid with higher tax rates for corporations and the wealthy.

Scalise, the House's No. 2 Republican, also raised objections about the Democrats' linking of the two bills. In an interview with Fox Business, Scalise directly criticized the bipartisan infrastructure bill that Cassidy helped negotiate as well, saying it has “a lot of things in there that people are not going to like."

"We are continuing to read through the 2,700 page bill to make an informed decision,” Barnett said.