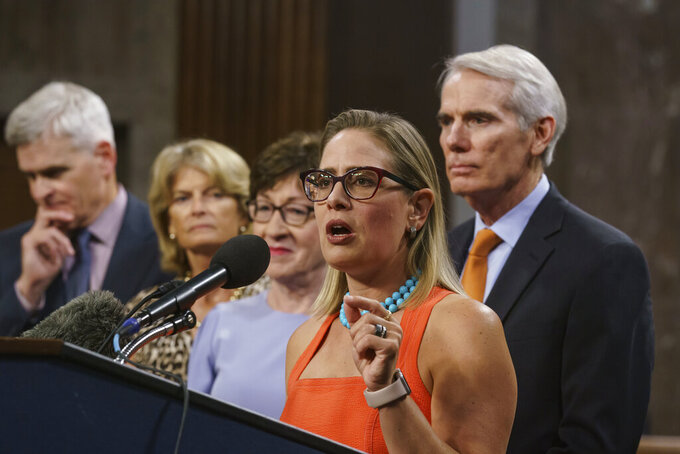 PHOENIX (AP) — Arizona Democratic Sen. Kyrsten Sinema has faced unrelenting tension with activists in her party over her insistence that bipartisan deal-making is still the way to do big things during a hyper-partisan era in Washington.

She got a measure of tentative vindication Tuesday when the Senate passed a $1 trillion bipartisan infrastructure bill for which she was a lead negotiator.

“For months people have been saying, ‘Oh bipartisanship is dead and you can only do things when one party does it alone,’ ” Sinema told The Associated Press in a brief interview. “I have never believed that, and I refuse to accept it, and what we’ve shown today is that that talking point is false.”

Progressive Democrats have grown increasingly frustrated with Sinema, who started her political career as an antiwar activist and has transformed into one of the most prominent moderates in Congress. They see her ironclad commitment to preserving the filibuster, which prevents Democrats from passing most legislation without Republican support, as a barrier to voting rights legislation.

Two weeks ago, the Rev. Jesse Jackson was among 39 people arrested for staging a sit-in outside her Phoenix office demanding she soften her ironclad commitment to preserving the filibuster. It was the latest in an ongoing series of protests.

Sinema has long maintained that the filibuster forces Republicans and Democrats to work together and pass less ambitious but more enduring legislation.

President Joe Biden called to congratulate Sinema shortly after the vote on the infrastructure bill, which garnered 19 Republican votes in addition to all 50 Democrats.

Sinema’s office has spent weeks promoting the infrastructure bill’s benefits for Arizona, including billions of dollars for roads and bridges, airports, water infrastructure, wildfire prevention and broadband internet. It still requires approval in the House.

“The bill is filled of game-changing provisions that serve our country,” Sinema said.

The pressure from the left will only intensify as Senate Democrats turn their attention to a budget resolution envisioning a massive $3.5 trillion, 10-year cascade of federal resources, aiming historic sums at family support, health and education programs and an aggressive drive to heal the climate. That plan is likely to include elements that were stripped from Biden's original infrastructure proposal in pursuit of bipartisan support.

“Her work on the infrastructure bill is a huge accomplishment in terms of getting bipartisan agreement on really significant legislation. But I think Arizona children and families still need so much more,” said David Lujan, president and CEO of the Children’s Action Alliance, a Phoenix-based advocacy group.

Sinema said she supports some of the goals of the plan, but the $3.5 trillion price tag is too big. She has been vague about what she wants to see but pledged to work with Biden and Congress.

Democrats are using budget procedures that allow them to bypass Republican filibusters, but they will need support from all 50 Democrats, including Sinema and other moderates including Sens. Joe Manchin of West Virginia and Jon Tester of Montana.

“I hope she will get behind other Democrats and support the measure through the reconciliation process,” said Lujan, who worked closely with Sinema in the Legislature more than a decade ago, when he was leader of the Arizona House Democrats and she was the assistant leader.