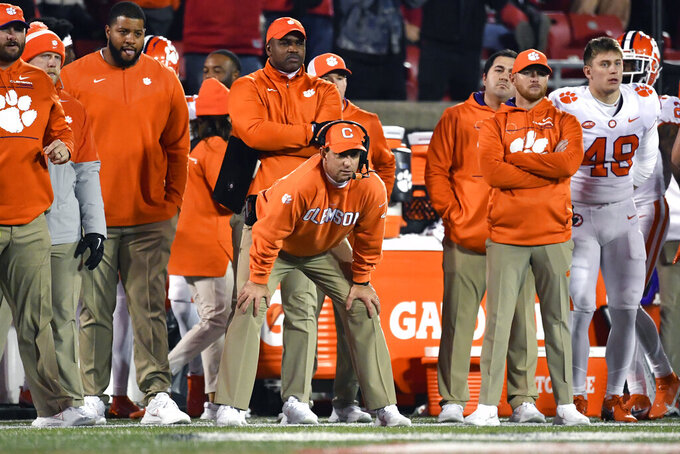 CLEMSON, S.C. (AP) — Clemson has embraced a different style of winning this season.

The Tigers are not the Atlantic Coast Conference juggernaut they been the past six seasons, but somehow are still in contention for a seventh league title.

Clemson isn't pummeling ACC opponents the way they have been since 2015, a stretch in which the Tigers went 52-3 in conference play.

This season for Clemson (6-3, 5-2 ACC) has needed several fourth-quarter scoring drives and goal lines stands to remain in title contention.

There have been comebacks in the final period after falling behind to beat Florida State and Louisville the past two weeks. There were fourth-quarter stands to top Georgia Tech 14-8 in September and Syracuse 17-14 on the road a month later.

Through it all, Clemson coaches and players have gone from a frantic, early search on to re-ignite the winning formula of the past to an understanding and appreciation of the journey they've taken this season.

“I don't know that I've ever had more fun playing football,” said James Skalski, a sixth-year linebacker who was part of the 2016 and 2018 national champions.

Clemson steps out of ACC action this week with a home game against struggling UConn (1-8).

The Tigers were expected to continue bludgeoning whoever they played with the preseason buzz around sophomore D.J. Uiagalelei. He stepped in at quarterback to replace Trevor Lawrence, the top pick in last year's NFL draft.

But Uiagalelei has had trouble with his accuracy as Clemson only managed six touchdowns in its first five games against FBS competition. The low point came when he was benched in the second half of a 27-17 loss at Pitt last month after his attempted shovel pass went for a Panthers' pick six.

Since then, the 6-foot-4, 250-pound Uiagalelei has steadily grown into a leadership position and enhanced his chemistry with his receivers.

Clemson put up 30 points in beating the Seminoles and Cardinals the past two weeks, its season high against ACC teams.

Uiagalelei has been sharper in those games, too, completing 37 of 61 passes for 409 yards, three TDs and one interception. He sustained a knee ligament sprain in the Louisville win, but continued to play. Uiagalelei said he feels a little pain, but should be OK to face UConn.

“It's a little booboo, but it'll be alright," the QB said.

The Tigers defense saved the 30-24 win at Louisville with four stops after the Cardinals had advanced for a 1st-and-goal at the Clemson 2.

Clemson defensive coordinator Brent Venables said the reality of missing the College Football Playoff for the first time since 2014 hasn't altered the players' drive to improve.

“I think most of society would have this let down and feel tremendous disappointment and not be able to respond the way our guys have all year,” he said.

Tigers coach Dabo Swinney agreed, saying his players have shown “a ton of heart and grit and toughness. To be where we are, especially with our backs against the wall from day one, there are a lot of great lessons that will come from it."

And maybe even another run at an ACC championship.

Clemson trails No. 13 Wake Forest and No. 21 North Carolina State in the ACC Atlantic and would need multiple losses from both to reach the title game. The Tigers can help their cause when they face the Demon Deacons at home Nov. 20.

It's definitely a long shot in the final month of the season.

“If we just keep taking care of our business, then maybe that'll happen for us,” Skalski said.