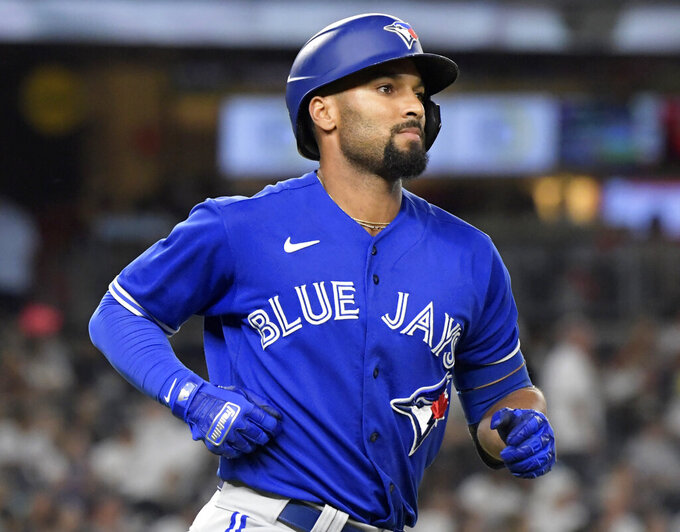 Bill Kostroun, ASSOCIATED PRESS
FILE - Toronto Blue Jays' Marcus Semien runs the bases on a home run against the New York Yankees during the fifth inning of a baseball game Tuesday, Sept. 7, 2021, at Yankee Stadium in New York. The Texas Rangers have reached an agreement on a seven-year contract with Gold Glove second baseman and potential shortstop Marcus Semien, according to a source familiar with the deal. That person spoke to The Associated Press on condition of anonymity Sunday night, Nov. 28, 2021 because the deal was not finalized. ESPN, which first reported the agreement, said it was worth $175 million. (AP Photo/Bill Kostroun, File)

The Texas Rangers have reached an agreement on a seven-year contract with Gold Glove second baseman and potential shortstop Marcus Semien, according to a person familiar with the deal, and the team has also come to terms with right-handed starter Jon Gray and outfielder Kole Calhoun.

That person spoke to The Associated Press on condition of anonymity Sunday night, when all the deals were pending physicals and not finalized. ESPN, which first reported the Semien agreement, said it was worth $175 million.

Semien was a shortstop in his six seasons with Oakland from 2015-20 before starting 147 games at second base and playing all 162 games for Toronto this year. He signed an $18 million, one-year deal with the Blue Jays in free agency last offseason.

Semien could play shortstop or second base for the Rangers, depending on what other moves might be made this offseason.

The 34-year-old Calhoun, whose one-year deal is reportedly worth $5.2 million and includes a team option for 2023, played for Arizona the past two seasons. He previously played in the AL West with the Los Angeles Angels from 2012-19.

After a 102-loss season, the Rangers had indicated they were willing to spend as needed and could be active in free agency this offseason to improve the team. They went into the offseason with only about $28 million committed to salaries for 2022.

Texas this year used a club-record 26 rookies, with at least four or five of them routinely in the lineup.

The Rangers had their fifth consecutive losing season since last winning the AL West in 2016. They finished 29th in the majors with their .232 team batting average and were shut out a majors-high 15 times while scoring an AL-low 625 runs, their fewest in a full 162-game season since 613 in 1994.