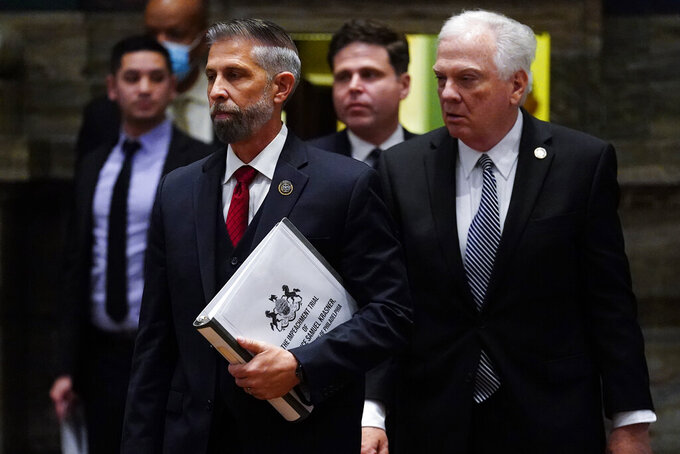 HARRISBURG, Pa. (AP) — The Pennsylvania state Senate on Wednesday began what could be a long and partisan process of considering whether to force Philadelphia's Democratic district attorney, Larry Krasner, from office.

Members of the Republican-controlled Senate formally received impeachment articles from House impeachment managers, read aloud in a ceremony after senators were sworn in as jurors.

The impeachment is part of a wave of efforts across the country to remove progressive prosecutors over crimefighting policies amid a rise in violent crime nationally. Krasner has not been charged with any wrongdoing.

The Senate's Republican majority said the chamber's members are constitutionally bound to consider the impeachment articles. But minority Democrats say Republicans are unconstitutionally stretching the process past Wednesday's end of the legislative session and into a new two-year session.

The impeachment trial itself is not scheduled to start until Jan. 18. Krasner will have until Dec. 21 to enter a plea.

The Senate will create a committee of senators to hear evidence and produce a report to the full chamber.

Krasner — a progressive civil rights lawyer who ran as an opponent of the death penalty, cash bail and prosecuting minor nonviolent offenses — was overwhelmingly reelected last year to a second four-year term. He calls his impeachment “pure politics” and an effort to subvert the will of Philadelphia voters, while Democrats call it an abuse of legislative power.

In the articles, House Republicans allege that Krasner's policies and practices “have led to catastrophic consequences” for Philadelphians.

However, Krasner said House Republicans don’t have a shred of evidence that his policies are connected to an “uptick” in crime, and numerous researchers say they've found no connection between progressive crimefighting policies and an increase in homicide rates.

The vote to impeach Krasner in the Republican-controlled House was along party lines, except for one vote. A Senate vote to convict him — and force him from office — will require cooperation from Democrats, and Democrats have shown no willingness to cooperate.

The state constitution requires a two-thirds vote in the Senate to convict, or 34 of 50 senators. The Nov. 8 election gave the GOP a 28-22 majority in the Senate in the next legislative session.

The last time the Pennsylvania Senate tried an impeachment case was nearly three decades ago when, after a monthslong process, it convicted former state Supreme Court Justice Rolf Larsen, who already had been convicted of conspiracy counts in a criminal court and removed from office.

Krasner's impeachment vote came amid rising gun violence and homicides in the state's largest city, and disagreements between Krasner and police department brass over how to stem it. Krasner also has clashed with the city's police union — which supported his opponents in both of his campaigns — amid a slew of criminal cases involving charges against officers in the nation's sixth-most populous city.

House Republicans approved seven articles of impeachment, including complaints about Krasner's prosecution and bail policies. They also cited court rebukes of how his office handled several cases, complained that he had not adequately notified crime victims of developments in certain cases and claimed that Krasner obstructed the House’s investigation of his office.

Krasner and Democrats accuse Republicans of neglecting violence by blocking the city's efforts to enact gun-control measures. Democrats also say the case against Krasner is weak.

Pennsylvania lawmakers have only removed two officials — both of them judges — through impeachment. The first was a county judge in 1811.