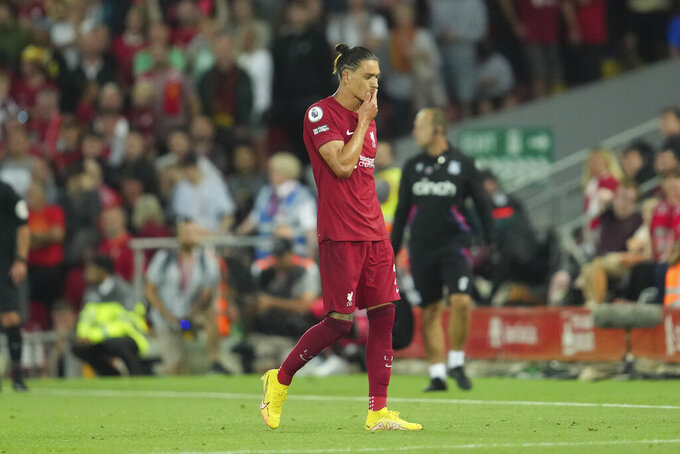 LONDON (AP) — Crystal Palace defender Joachim Andersen says he received death threats and an avalanche of abuse online after Liverpool's Darwin Núñez was ejected for headbutting him in a Premier League game on Monday night.

Andersen took to Instagram to share what he said was a sample of hundreds of abusive messages he has received since the 1-1 draw at Anfield.

“Got maybe 300-400 of these messages last night,” the Dane posted Tuesday to his Instagram story, which called on the league and Instagram to take action.

Media reports said Andersen has also spoken to the police.

Some of the screenshots called for the Palace player’s death, and many were full of expletives. Some messages threatened not just Andersen but his family as well.

A Premier League spokesperson confirmed the governing body had been in touch with Palace to offer help, Britain’s Press Association said.

The British parliament had been set to discuss new legislation in July that would have forced tech companies to take stronger measures to tackle abuse and hate on their platforms, but the bill was postponed until a new leader of the ruling Conservative party is chosen.

Núñez was making his first competitive start for Liverpool. The club's big offseason signing lost his temper after jostling with Andersen off the ball and thrust his head into the face of the defender. He was sent off in the 57th minute. Andersen got a yellow card in the same incident.

Núñez is facing a three-match ban for violent conduct.