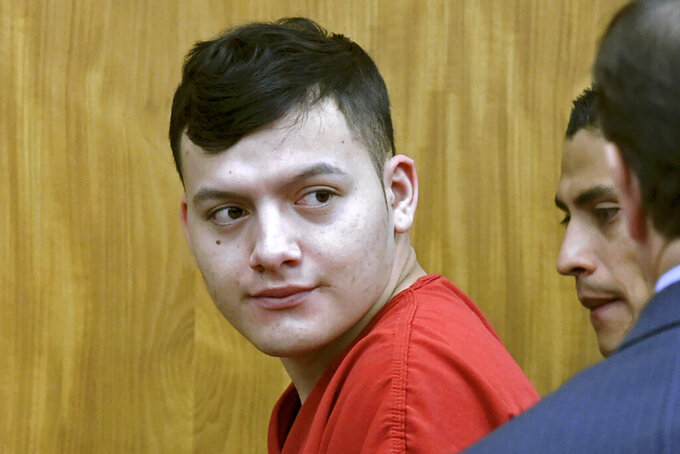 Andy Barron, ASSOCIATED PRESS
FILE - In this May 20, 2019, file photo, Wilber Ernesto Martinez-Guzman, from El Salvador, appears in Washoe District Court in Reno, Nev. The Nevada Supreme Court ruled Thursday, Sept. 30, 2021, Martinez-Guzman, accused of killing four northern Nevadans during a crime rampage in 2019 must be tried separately in Washoe County for the deaths of a Reno couple and in Douglas County for two women who were fatally shot in Gardnerville. (Andy Barron/The Reno Gazette-Journal via AP, Pool, File)

RENO, Nev. (AP) — The Nevada Supreme Court ruled Thursday that a Salvadoran immigrant accused of killing four people during a string of crimes in 2019 must be tried separately in both counties where the slayings took place.

Prosecutors argued that Wilber Ernesto Martinez Guzman should be tried for all four killings in Washoe County, where a grand jury indicted him on four murder and five burglary charges.

In a 5-2 decision, the justices agreed with Martinez Guzman’s public defenders that he is entitled to two trials, one in Washoe County for the deaths of a Reno couple and another in Douglas County for two women who were fatally shot in separate homes in rural Gardnerville.

The court ordered a Washoe County judge to dismiss the charges related to Douglas County because the grand jury in Reno lacked proper jurisdiction to indict him for those crimes.

The trial had been scheduled to begin early next year in Reno. Martinez Guzman was in the country illegally and had worked as a landscaper at all three properties where the four were killed over a two-week period, police said. They said he confessed to the shootings.

They say he stole a .22 caliber revolver from Gerald and Sharon David's Reno home on Jan. 4, 2019, burglarized and killed Connie Koontz five days later, then did the same to Sophia Renken the next week before burglarizing and killing the Davids on Jan. 15.

Prosecutors said the ruling will further delay a resolution in the case and that they will have to prosecute the same facts twice.

They are seeking the death penalty if Martinez Guzman is convicted in the killings.

Prosecutors had argued that Nevada law allowed for one trial because the facts in the cases were “intertwined,” including evidence showing Martinez Guzman shot all four victims with the same gun he stole from the Davids' residence.

Those theories “were too speculative and unsupported by the evidence" to allow the Douglas County killings to be tried in Washoe County, Justice Lidia Stiglich wrote in the majority opinion.

Justice Kristina Pickering, joined by Justice Ron Parraguirre, wrote in dissenting opinion that prosecutors had presented enough evidence that all the crimes were interconnected to warrant one trial in Washoe County.

“But for obtaining the revolver in Washoe, he could not have committed the Douglas offenses,” she wrote.

The majority acknowledged that the case “touches on an important and largely unsettled legal question in Nevada: what nexus between where a crime is committed and where it is charged must exist to make venue proper?”

While Nevada law provides some exceptions allowing some crimes to be prosecuted in more than one county, the prosecution had failed to satisfy the standards, the court said.

The majority said prosecutors argue that Martinez Guzman “had an original plan to rob outbuildings and garages on the three properties and then changed his intent after finding the Davids’ firearm in Washoe County.”

“There is no evidence that Martinez Guzman took the firearm in preparation for the burglaries and murder in Douglas County,” the ruling says.

In the dissent, Pickering wrote that the Legislature has passed laws to allow some crimes to be prosecuted in more than one county because there's no reason “to conduct multiple trials and risk inconsistent results" when crimes are connected enough.

“This is to say nothing of the level of extreme anguish communities, victims, victims’ families and criminal defendants face at the prospect of the sort of duplicate proceedings the majority’s approach would foster,” she said.