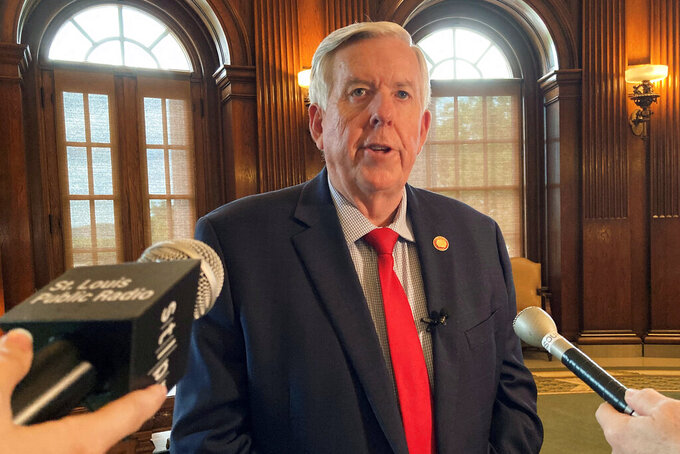 David A. Lieb, ASSOCIATED PRESS
FILE - Missouri Gov. Mike Parson speaks to reporters after signing legislation redrawing the state's congressional districts on Wednesday, May 18, 2022, at the state Capitol in Jefferson City, Mo. Parson is calling on lawmakers to pass an income tax cut. Parson on Friday, July 1, 2022, proposed the tax cut after vetoing a tax refund program that the GOP-led Legislature passed this year. (AP Photo/David A. Lieb, File)

Parson proposed a special legislative session focused on cutting Missouri's individual income tax rate, which is 5.4% for most taxpayers, to around 4.7%.

Missouri has surplus revenue, in part due to repeated federal stimulus funding during the COVID-19 pandemic. Parson wants to use some of that extra funding for tax breaks, although he didn't provide details on what the cost might be.

“Now is the time to give back to hardworking Missourians,” Parson said.

He pitched increasing the standard deduction allowance and paring down the number of tax brackets. The governor also recommended cutting income taxes entirely for individuals who make $16,000 or less in a year or for couples filing jointly who make less than $32,000.

Parson has not yet decided when to call lawmakers back to the Capitol for a special session to work on tax changes, but said he wants tax cuts to kick in by Jan. 1, 2023.

He has support from at least one key legislative leader.

“In the face of historic inflation caused by reckless federal spending, I look forward to working with my colleagues and Gov. Parson to develop a plan to provide additional relief to Missouri families and job creators," Republican Senate President Pro Tem Dave Schatz said in a statement.

In practice, people would have received a $1 refund for each $1 of tax owed until their tax bill reached the refund limit of $500.

Democratic lawmakers had argued the tax refund would only benefit middle-income families because the poorest workers don't pay income taxes and that not enough money was set aside to provide the full $500 or $1,000 for everyone who qualified.

Parson echoed similar concerns when announcing his veto Friday at the Capitol, telling reporters that “no one was ever going to receive direct checks for $500 or $1,000” under that bill.

Republican Sen. Lincoln Hough, who sponsored a different tax refund proposal, called Parson's decision to veto the bill “frustrating and disappointing.” But he said he'll work with Parson and lawmakers to pass a tax cut.