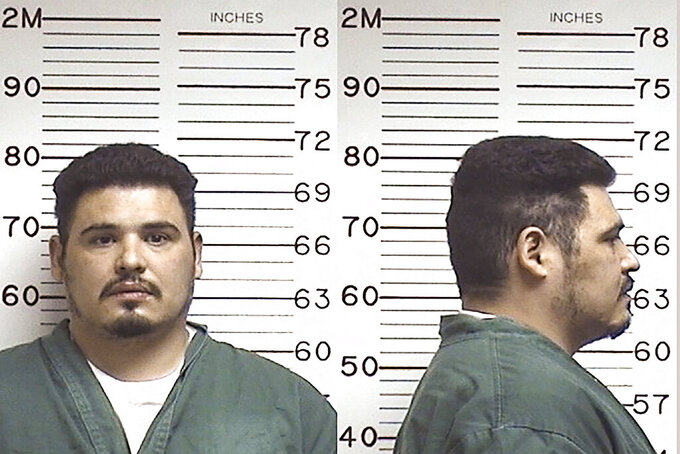 Uncredited, ASSOCIATED PRESS
FILE - In this undated booking photo provided by the Colorado Department of Corrections is Juan Jose Figueroa Jr., 33, who is currently serving time at the Buena Vista Correctional Facility in Buena Vista, Colo. Figueroa was indicted last year for murder and kidnapping in the disappearance of Rita Gutierrez-Garcia. Authorities say her remains were found this week. (Colorado Department of Corrections via AP, File)

DENVER (AP) — Recently found human remains were confirmed this week to be those of a woman who disappeared after going out with friends and cousins four years ago, authorities said.

A preliminary DNA analysis confirmed that remains found near Longmont last month were that of Rita Gutierrez-Garcia, said the office of 20th Judicial District Attorney Michael Dougherty and Longmont's Department of Public Safety in a joint news release Thursday.

It also said the inmate indicted last year on murder and kidnapping charges in what was at the time her presumed death, Juan Figueroa Jr., was scheduled to appear in court June 3 for a hearing to enter a guilty plea and then be immediately sentenced.

More details would be provided at that hearing, according to the release. A district attorney's spokesperson, Shannon Carbone, said Friday she could not provide more information.

One of Figueroa's lawyers, Rachel Oliver, declined to comment. A telephone message left for another attorney was not immediately returned.

In a statement to KUSA-TV, Gutierrez-Garcia’s mother, Diane Romero, expressed her gratitude to both the public and police for the news.

“I am grateful for this day, thank first and foremost to my Lord and all who kept praying for our family,” she said.

Investigators and her family did not believe Gutierrez-Garcia, a mother of three who was a month away from finishing her education to become a paralegal, ran away. Investigators could not find any activity related to her financial or social media accounts.

Investigators had long seen Figueroa as a possible suspect and viewed his prosecution in a 2017 case as a stepping stone to charging him in Gutierrez-Garcia's death. He was sentenced to 93 years to life after being convicted of sexual assault and attempted murder of a woman he met at a bar in Longmont, a few months before Gutierrez-Garcia was last seen there early on March 18, 2018, celebrating St. Patrick's Day.

Wiretapped statements he allegedly made while in prison about killing Gutierrez-Garcia were presented to the first grand jury to convene in the area during the pandemic last spring.

According to the indictment, Figueroa fled to Mexico after being suspected in Gutierrez-Garcia's disappearance and upon returning to the United States, he seemed almost relieved to learn that he was wanted in the 2017 sexual assault and would likely be extradited to Colorado.

“That’s it? ... Just sexual assault? ... Sweet (claps) let’s get this over and done with so I can get my bond, get it posted,” he said, according to the indictment.

In one of the wiretapped conversations, Figueroa allegedly said that he had buried Gutierrez-Garcia’s body and the only way to find it would be if “police inserted a probe into his brain,” according to the indictment.

The joint news release said that prosecutors and Figueroa's lawyers continued to talk about the case as his scheduled May trial approached and also that information was provided to investigators, including the exact location of Gutierrez-Garcia’s remains. It did not say how that information was given.