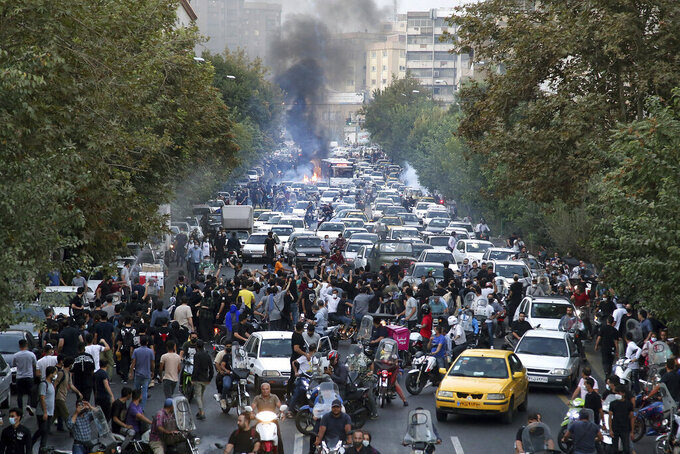 Uncredited, ASSOCIATED PRESS
FILE - In this photo taken by an individual not employed by the Associated Press and obtained by the AP outside Iran, protesters chant slogans during a protest over the death of a woman who was detained by the morality police, in downtown Tehran, Iran, Sept. 21, 2022. Iran’s Foreign Ministry said Sunday, Sept. 25, 2022, that it summoned Britain's ambassador to protest what it described as a hostile atmosphere created by London-based Farsi language media outlets. The move comes amid violent unrest in Iran triggered by the death of a young woman in police custody. (AP Photo. File)

Only glimpses of videos that make it online show the protests convulsing Iran over the death of a 22-year-old woman who had been detained by the nation's morality police.

But those flashes show that public anger across the country, once only simmering, is now boiling.

The demonstrations surrounding the death of Mahsa Amini — and the government crackdown emerging to stifle them — represent just the latest cycle of unrest to grip Iran since its 1979 Islamic Revolution.

It likely won't be the last as the Islamic Republic lurches between crises at home and abroad. The window through which the wider world can view them will only become more dim as authorities restrict internet access, detain journalists and tightly control all levers of the government's power.

Protests over Amini's death have spread across at least 46 Iranian cities, towns and villages. State TV has suggested that at least 41 protesters and police have been killed since the protests began on Sept. 17. An Associated Press count of official statements by authorities puts the death toll at at least 13, with more than 1,200 demonstrators arrested.

But the tightening crackdown doesn't come as a surprise, given Iran's modern history.

Iran's theocracy has viewed itself as under threat from the moment the late Ayatollah Ruhollah Khomeini returned to Tehran in 1979.

Bombings in 1981 blamed on dissidents killed dozens of top officials. One even paralyzed the right arm of Supreme Leader Ayatollah Ali Khamenei. Iraqi dictator Saddam Hussein launched a bloody eight-year war on Iran in which 1 million people were killed.

In Tehran, enmity toward the United States began with the American-backed 1953 coup that cemented the shah's reign. For Washington, the 1979 U.S. Embassy hostage crisis stoked hostility toward Iran.

And the mutual distrust continues today. Since the collapse of a deal in 2015 intended to curtail Tehran's nuclear ambitions, Iran has amassed enough highly enriched uranium to produce an atomic bomb if it chose to do so.

The Iranian government has dismissed the latest protests as a foreign plot, rather than an expression of public outrage over the death of a woman detained only because her mandatory headscarf, or hijab, wasn't to the morality police's liking.

Pro-government marches in Tehran and other cities echoed the official line, with some marchers chanting “American mercenaries are fighting the religion.”

The government's decision to restrict Instagram, LinkedIn and WhatsApp — three of the last Western social media apps working in the country — has limited the ability for protesters to organize and share their videos with the outside world.

Instead, only short clips find their way out, including those of security forces firing at protesters and women defiantly cutting off their hair and burning their hijabs. Security forces, including motorcycle-riding volunteers with Iran's paramilitary Revolutionary Guard, have attacked peaceful demonstrators.

There's also been footage of apparent demonstrators setting fires, flipping over police cars and fighting back against riot police.

These scenes are similar to those that occurred in 2019 after the government dropped fuel subsidies, prompting demonstrators to set gas stations ablaze and ransack banks. Rights groups say that the unrest across more than 100 cities and towns — and the government crackdown that followed — killed over 300 people and led to thousands of arrests.

Because of the internet restrictions, it remains unclear if the latest protests have eclipsed those of 2019. Exiled opposition groups and Iranian hard-liners have both used the short clips online to paint their own pictures of the unrest as the government largely remains silent.

Independent observers such as human rights activists face threats, intimidation and arrest in Iran. Text messages from the government to the public warn of criminal charges for joining demonstrations. At least 18 reporters are known to have been arrested so far in the crackdown, according to the Committee to Protect Journalists.

Like other rounds of unrest since 2009, when millions took to the streets as part of the so-called Green Movement to protest a disputed presidential election, the latest demonstrations appear spontaneous and leaderless.

Even if a government crackdown eventually quells the protests, it likely won't eradicate the deep-seated rage.

Iranian politics have grown insular and uncompromising. In the 2021 presidential election, all serious contenders were disqualified to allow Ebrahim Raisi, a protégé of Khamenei, to take the presidency in the lowest turnout vote in the Islamic Republic's history.

The economic challenges and hard-line political positions are only likely to solidify. Even if Iran agreed to a road map to restore the nuclear deal, it likely will face new U.S. sanctions over selling so-called suicide drones to Russia to use in its ongoing war in Ukraine.

A battle over leadership could turn Iran's focus further inward. There is no designated successor for the 83-year-old Khamenei, though some analysts suggest his son, Mojtaba Khamenei, might be considered by clerics to become the next supreme leader.

Meanwhile, the Revolutionary Guard, which answers only to the supreme leader, has grown increasingly powerful — both militarily and economically — during the recent tensions with the West. The U.S. Treasury said the Guard has smuggled “hundreds of millions of dollars” worth of sanctioned oil into the international market.

Both the theocracy and the Guard have financial and political incentive to continue the status quo. And with no other outlets, mass protests by the Iranian public seem likely to continue.

EDITOR’S NOTE — Jon Gambrell, the news director for the Gulf and Iran for The Associated Press, has reported from each of the Gulf Cooperation Council countries, Iran and other locations across the world since joining the AP in 2006. Follow him on Twitter at www.twitter.com/jongambrellAP.