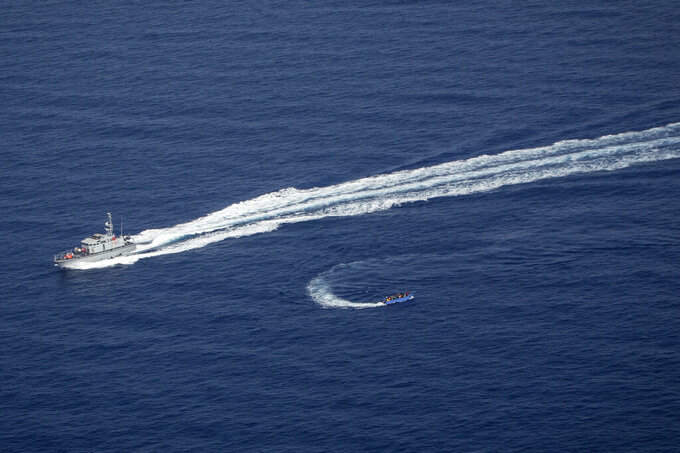 Uncredited, ASSOCIATED PRESS
FILE - In this June 30, 2021 file photo, an overcrowded migrant boat, right, tries to escape from the Libyan Coast Guard in the Mediterranean Sea. Italian lawmakers approved renewed funding to train the Libyan coast guard as Amnesty International released a report Thursday, July 15, 2021, amid fresh accusations the migrants it rescues at sea are returned to horrific conditions in detention camps in the northern African nation. (Sea-Watch.org via AP)

The training program is under an umbrella of Italian military missions abroad, which members of the Italian Parliament's lower house, the Chamber of Deputies, discussed ahead of the funding vote.

In its scathing report on abuses in Libyan detention camps, Amnesty International called on European nations to suspend their cooperation with Libya on migration and border control.

Recently, the Libyan coast guard fired at a migrant boat in the Mediterranean and carried out maneuvers which could have risked overturning the vessel, a scene observed by the crew of a migrant rescue group's surveillance aircraft.

Amnesty International's report detailed the experiences of 53 refugees and migrants in Libyan detention centers. Most of them were detained following their interception at sea by Libya's coast guard, which for several years has received training, vessels and equipment from Italy.

Successive Italian governments have supported the Libyan coast guard in hopes of curbing people setting out for Europe from northern Africa and who made it to Italian shores by the tens of thousands for several years.

Many of the new arrivals are economic migrants found ineligible for asylum by Italian authorities. Most other European Union nations have been largely unresponsive to Italy's repeated appeals that they take in some of the asylum-seekers, many of whom want to reach jobs or families in northern Europe.

Amnesty International said that in the first six months of this year, more than 7,000 people intercepted at sea were forcibly returned to a Libyan camp.

At another detention facility, in Tripoli, according to the group's report, “Former detainees there said that guards raped women and some were coerced into sex in exchange for their release or for essentials such as clean water. ”

For years now, rights groups and officials at U.N. agencies that work with migrants and refugees have cited survivor testimony about systematic abuse in the camps, including forced labor, beatings, rapes and torture. The abuse often accompanies efforts to extort money from families before migrants are allowed to leave Libya on traffickers' boats.

A majority of Italian lawmakers rejected a proposed resolution from 30 fellow deputies to immediately suspend assistance to the Libya coast guard. Far-left lawmaker Erasmo Palazzotto was one of resolution's sponsors.

In the Libyan-run detention centers, the migrants are "tortured, raped, killed or sold as slaves,'' Palazzotto said.

Lawmakers from a small centrist party, Italia Viva, declined to vote on the Libyan aid.

“It's indispensable to exert the maximum pressure of Italy in preventing unacceptable, systematic violations of human rights and all that criminal conduct (aimed) at sinking boats of migrants by the Libyan coast guard,”' Italia Viva member Giuseppina Occhionero was quoted as saying by the Italian news agency LaPresse.

Among those approving more aid for the Libyan coast guard was the far-right Brothers of Italy, a party fast-growing in popularity.