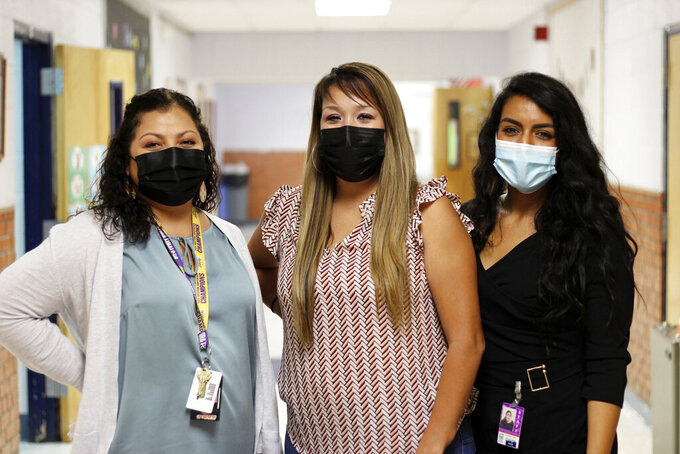 Though each of the 80 community schools in New Mexico offer different services, their missions are the same.

Greenberg tells the Las Cruces Sun-News that mission is to “strategically leverage partnerships to be with local businesses and faith-based organizations or nonprofit organizations or different health providers to to meet the vision of the needs that the communities establish.”

What he means is that if a community needs it, you’ll find it at a community school, with services available to anyone beyond just when school is in session.

And if a community school doesn’t have what you need, a staff member can find a service to help. Once those basic needs are met, the community can thrive, advocates say.

Advocates say community school strategies help the state fulfill it’s directives in the Yazzie/Martinez lawsuit from 2018 that revealed at-risk children in New Mexico aren’t getting the same level of education as their peers.

“The first step in really reinventing education is shifting who’s at the table and in the room making decisions, and doing the deep listening that we need to do to understand (where) the people are at this point in time,” Greenberg said.

What do community schools do?

Lucia Carrillo and her three young children — ages 8, 5 and 2 — live in Arrey, a small town south of Truth or Consequences. Carrillo also cares for her 15-year-old niece, all while working toward for her degree in Early Childhood Education at Doña Ana Community College and New Mexico State University.

Carrillo has watched the small town come together since Arrey Elementary School became a community school in 2019.

“More people are coming out to get the help and seek the help,” she said.

Arrey Community Elementary has fewer than 100 students enrolled, according to community school coordinator Yolanda Tafoya. However, Tafoya said she provides services to over 180 families in the area.

“Those home visits, going in and actually seeing where the students are living, and what their needs are, have just opened my eyes tremendously,” Tafoya said. “To know these are their struggles, (these are) some of the barriers that they may have. The reason we’re here is all about students, helping them succeed. The only way that they can be successful in school, is make sure they have every basic need covered.”

For residents of rural communities, those needs can be myriad and wide-ranging, from food to clothes to health care to internet and utility services.

When Tafoya realized that internet access was a huge problem for Arrey families, the community school provided computers, hotspots and other internet services. She said the school is also working on establishing a computer lab inside the school for anyone in the community.

Tafoya has also worked for years to establish a food pantry in town, which she has now done thanks in part to the community school label.

“Instead of it being an entity or an individual or church, we were able to establish under the school district,” she said.

Tafoya now receives weekly truckloads of food from Roadrunner Food Bank as well as donations from the local grocery stores in Arrey and nearby Hatch. She travels dirt roads to deliver food to 160 families — 600 individuals — weekly.

Cuba Independent Schools also provides food to residents through its community school. The school building now has racks of clothes that families have access to.

Dominguez said one of the families that uses the community school services lives about 45 minutes away. Often the family’s grandma will come to pick up food or clothes for the 23 people living in that one house and breaks down crying due to gratitude.

Building that trust with the community is key to providing resources, Dominguez said.

Dominguez said there are many families that don’t have electricity or running water in the area. She said some have generators, but they are loud and expensive to sustain.

The week of Aug. 30, Cuba community schools helped facilitate the installation of solar panels in the homes of seven families, a program paid for by the the New Mexico Senate and the Indigenous Education Department.

“You just let us know what you need from us, and if we don’t have resources, we’re gonna find resources for you,” she said.

Community schools also are in cities wherein the schools can rely more on partnering with already existing organizations in the area.

In Las Cruces Public Schools, the five community schools put a focus on outreach through after school programs.

Sierra also has a brand new school-based health center that is open for general exams and behavioral health services.

Where does this funding come from?

All 33 are funded through the New Mexico Community Schools Act, which Gov. Michelle Lujan Grisham signed in April 2019.

Community schools are often placed in areas of high poverty where services are most needed. Of the state-funded community schools, 16 are elementary schools, six are middle schools and six are high schools. The other five are charter schools serving K-8, K-12, K-2 and 6-12.

Through the Community Schools Act, $2 million was set aside for community school initiatives in New Mexico. Schools that are accepted for the grant receive $150,000 each year for a period of three years to get them started.

The thinking is after that three-year period, the community school would have sufficient roots and can rely on community partners and sponsors to continue its services.

In May, the PED issued 50 grants totaling $6.6 million to schools across New Mexico to plan for or to implement the community school strategy in the 2021-22 school year.

Other funding can come from partners like Kellogg or other state and federal grants.

What can we expect in the future?

Muñoz said New Mexico stands out because of the joint powers agreements that have been established between cities and districts in order to support community schools. Albuquerque Public Schools was the first to sign an agreement in 2007: the ABC Community Schools Partnership. The district now has 34 community schools.

In 2018, the City of Las Cruces and Las Cruces Public Schools signed an agreement modeled after the one in Albuquerque.

“A superintendent changes, a mayor changes, a county manager changes or something like that, but when you take the time and effort it takes to get a joint powers agreement, it doesn’t change because it’s recognized by the state and you are now an official entity,” Muñoz said. “We’re built for the long run if we can get some more joint partnership agreements that include tribal nations (and) how they work with their surrounding counties and cities.”

It can be expected that more community schools will be established in New Mexico in the coming years.

In July, President Joe Biden proposed an increase of funding for community schools from $30 million to $443 million.

Muñoz said his organization has a goal for 25% of all public schools in the U.S. to be community schools by 2025. He said that would create a tipping point in education.

“Once we get to that 25%, it’ll withstand any position, or any politician,” Muñoz said.