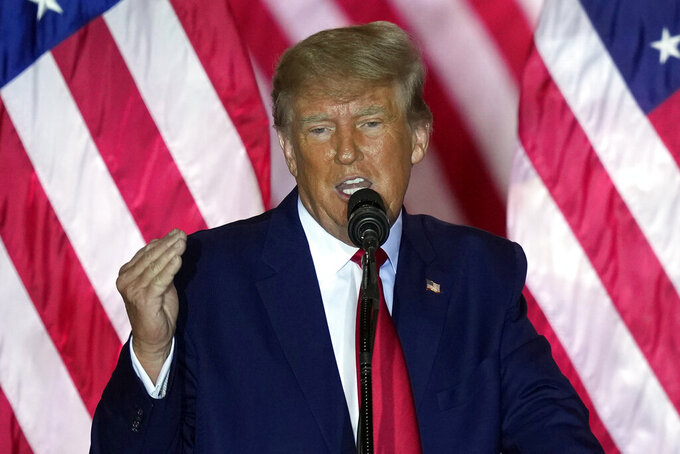 NEW YORK (AP) — Not all of his friends have abandoned him, but the harsh media reaction to former President Donald Trump's announcement that he's seeking the top office again illustrates that if he wants his old job back, he has a lot of convincing to do.

Just glance at some headlines: “Trump Shocks the World by Nearly Putting Us to Sleep,” said the RedState blog. “Old Mar-a-Lago Man Yells at Cloud,” said the American Conservative. “Donnie, Time to Go Away,” said Blue State Conservative. “Trump 3.0 is a Changed Man. He's a Loser,” said the Washington Examiner.

And those are conservative organizations.

“I've been aggregating stories from right-wing media since 2017,” said Howard Polskin, founder of The Righting newsletter. “I've never seen Trump receive such negative coverage from these outlets. It's not only negative, some of the headlines are downright insulting to him.”

“Florida Man Makes Announcement,” was the headline running across the bottom of the front page, directing readers to an article on Page 26.

“There is nobody who knows better than Rupert Murdoch that the way to upset Donald Trump is not to say his name,” Maggie Haberman, reporter for The New York Times and author of “Confidence Man: The Making of Donald Trump and the Breaking of America,” said on CNN.

The FoxNews.com website midday Wednesday was dominated by a picture of Florida Gov. Ron DeSantis, showered in red, white and blue confetti. It illustrated an article about the “enthusiastic response” DeSantis received at a GOP event.

Readers needed to scroll down further for an article about Trump's announcement.

The Wall Street Journal, like Fox another Murdoch-controlled property, editorialized earlier in the week against another Trump run. But it played his announcement straight on Wednesday, giving it front-page play.

Trump's announcement coincided with Sean Hannity's prime-time program on Fox News Channel, far and away the most popular media outlet for conservative viewers — and proof that Trump still has friends in powerful places and that there’s a long way to go before the next election. Hannity interrupted Trump two-thirds of the way through the announcement speech — not to abandon him, but to praise him.

“This was an absolutely brilliant speech,” said Hannity guest Mike Huckabee, the former Arkansas governor. “The best I've heard in a long time.”

Fox then returned to the speech.

The Newsmax network aired Trump's speech in full. Its website later wrote that in making the announcement, the former president was “turning a deaf ear to establishment calls to hold off or Democrat efforts to stop him.”

CNN aired about a third of Trump's speech live on Tuesday night before cutting it off. Analyst Tim Neftali said “this is TelePrompter Trump,” noting that he seemed to lack the energy he usually shows at rallies.

“I have a feeling that the midterm is depressing him terribly,” Neftali said.

MSNBC talked about Trump, but didn't air the speech. Broadcast networks stuck with their regular programming.

Mainstream news outlets pulled no punches. In the lead to its announcement story, The Washington Post described Trump as “the twice-impeached former president who refused to concede defeat and inspired a failed attempt to overthrow the 2020 election culminating in a deadly attack on the U.S. Capitol.”

Similarly, the top to a story on NPR's website said Trump “tried to overthrow the results of the 2020 presidential election and inspired a deadly riot at the Capitol in a desperate attempt to keep himself in power.”

A lengthy lead to The New York Times story said Trump's “historically divisive presidency shook the pillars of the country's Democratic institutions” and said he ignored the appeals of Republicans who blame him for the party's poor showing in the midterms.

In a news analysis, the Los Angeles Times said Trump “has reverted to a familiar tactic — meeting weakness with hubris.”

Away from the coasts, the Houston Chronicle led the paper with an account of Trump's announcement by The Associated Press. Neither the Charlotte Observer in North Carolina and Las Vegas Sun in Nevada mentioned Trump on their front pages, and the Chicago Tribune teased an article inside the paper.