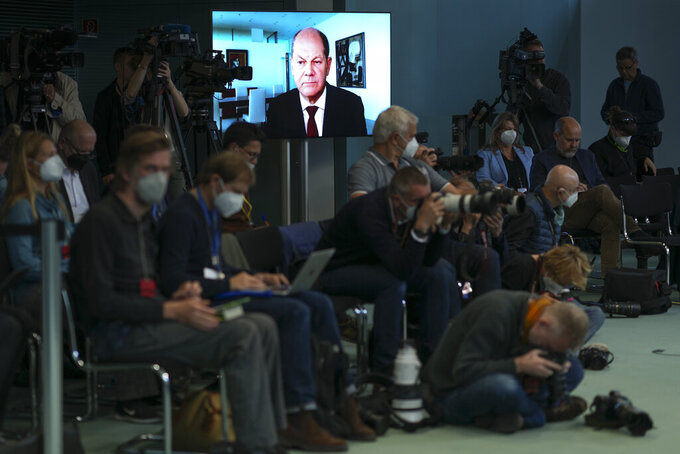 Markus Schreiber, ASSOCIATED PRESS
German Chancellor Olaf Scholz displayed on a screen during a news conference about the German energy supply with Economy and Climate Minister Robert Habeck and Finance Minister Christian Lindner at the chancellery in Berlin, Germany, Thursday, Sept. 29, 2022. Scholz appears via videolink as he is in quarantine for coronavirus. (AP Photo/Markus Schreiber)

BERLIN (AP) — Germany plans to spend up to 200 billion euros ($195 billion) helping consumers and businesses as surging energy prices due to the war in Ukraine are pushing Europe's largest economy into a looming recession.

Chancellor Olaf Scholz said Thursday that the government was reactivating an economic stabilizing fund previously used during the global financial crisis and the coronavirus pandemic.

The fund will be used to limit the price customers pay for natural gas, which is used to heat homes, generate electricity and power factories. The government is dropping a previously proposed surcharge on natural gas that was meant to help spread the rising cost of purchasing the fuel on the global market.

“One can say this is a double whammy,” Scholz said, speaking at a news conference by video link because he is isolating due to a COVID-19 infection.

Scholz said Russia’s decision to cut back natural gas to Europe and the recent leaks on the Nord Stream 1 and 2 pipelines running from Russia to Germany showed that further Russian energy supplies couldn’t be expected in the near future. European officials say gas reductions by state-owned exporter Gazprom are energy blackmail aimed at pressuring European governments over their support for Ukraine and for sanctions against Moscow.

“We're well prepared for this situation though,” Scholz said. “We have taken decisions that allow us to deal with this changed situation.”

The fund, part of wide efforts across Europe to provide relief on energy bills to households and businesses, was announced as German inflation hit double digits for the first time in decades, reaching 10.9% in September under the EU's harmonized standard. Leading economists warn Germany faces a recession because high prices for food, fuel, electricity and heating are leaving people with less money to spend on other things.

“We are sliding into a recession and will only come out of recession next spring,” said economist Torsten Schmidt from the Leibniz Institute for Economic Research. “The main burden is currently being felt by private households, which are suffering a massive loss of purchasing power."

Germany was heavily dependent for years on cheap gas from Russia, and businesses that use a lot of energy have been hard hit after Gazprom's cutbacks sent gas prices through the roof. The government and utilities have turned to more expensive liquefied gas that comes by ship from suppliers including the U.S. and have filled the country's underground storage to 91% ahead of the winter heating season. A gas shortage should be avoided if the winter is average.

Still, the government could be forced to ration energy to businesses if there is an exceptionally cold winter, a scenario that could cause a further sharp drop in the economy. Even now, high prices are making steel and fertilizer makers shut down production, saying it's not profitable due to the cost.

The U.K. government recently announced tax cuts funded by borrowing despite plans to spend billions shielding homes and businesses from soaring energy prices, resulting in a sharp fall of the pound this week.