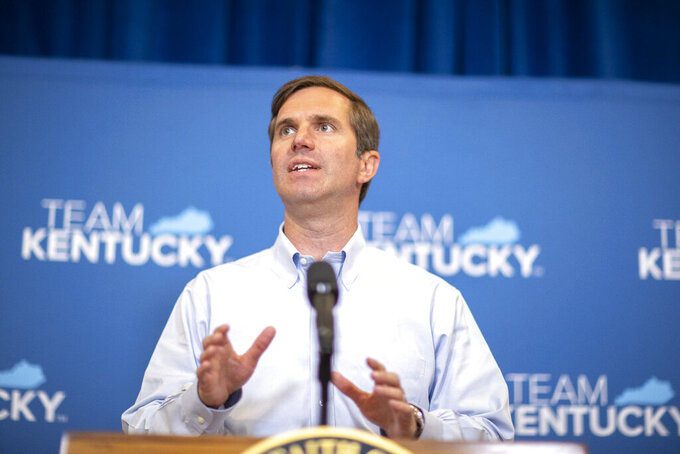 Republicans turned up pressure on Kentucky's Democratic governor Thursday to renew a contract with a Baptist-affiliated children's agency, reacting to a U.S. Supreme Court ruling they say should settle the dispute between religious beliefs and gay rights.

Gov. Andy Beshear was noncommittal about the future contract status of Sunrise Children’s Services. The foster care and adoption agency has balked at a nondiscrimination clause it says would compel it to sanction same-sex adoptions or foster parenting.

Pressed by reporters, Beshear acknowledged that “at least some of the initial language" in the high court's ruling “suggests” it might settle the Kentucky dispute.

"If the Supreme Court says this accommodation has to be offered to Sunrise, it will be offered to them,” Beshear, a former attorney general, said at a news conference.

Sunrise’s attorney, John Sheller, said the high court ruling “applies fully” to the Kentucky dispute. If Kentucky “fails to follow it, it will invite litigation which the governor is sure to lose,” he said.

“The facts and law are virtually identical and legally indistinguishable,” Sheller said in an email.

The Supreme Court on Thursday unanimously sided with a Catholic foster care agency that says its religious views prevent it from working with same-sex couples as foster parents. The court said the city of Philadelphia wrongly limited its relationship with the group as a result of the agency’s policy.

The Kentucky standoff revolves around a clause in a new contract with the state that bans discrimination based on sexual orientation and that Sunrise Children’s Services is refusing to sign.

Sunrise officials say the disputed clause would compel them to violate deeply held religious principles by sponsoring same-sex couples as foster or adoptive parents. Supporters of the provision see it as a safeguard against discrimination.

“The opinion clearly supports the ability of our state to continue a relationship that has ensured Kentucky’s most vulnerable children are cared for by an organization with an impeccable record of service,” House Republicans said in a statement.

The state set a June 30 deadline for Sunrise to sign the contract. If it refuses, the state has threatened to stop placing children with the agency. It has contracted with the state for 50-plus years, becoming one of Kentucky’s largest service providers for abused or neglected children.

A gay-rights group said Thursday that the Supreme Court ruling didn't have a direct implication in the ongoing contract dispute in Kentucky.

"We believe Kentucky still has every right to refuse to make exceptions for discrimination in state-funded foster and adoption care, and they should,” said Chris Hartman, executive director of the Fairness Campaign, a Louisville-based gay rights advocacy group.

Sunrise is affiliated with the Kentucky Baptist Convention, which has about 600,000 members in 2,400 churches. The faith views homosexuality as a sin.

Like many other states, Kentucky contracts with private agencies like Sunrise for some of its child welfare services. Kentucky’s Cabinet for Health and Family Services has said it hopes for a “positive resolution.” Sunrise President Dale Suttles says he wants the relationship to continue.

The state insisted it was bound by an Obama-era federal rule to include the contract clause Sunrise opposes. The rule included sexual orientation as a protected class under anti-discrimination provisions.

While pledging Kentucky will abide by the high court ruling, Beshear spoke personally about the issue, saying he has friends who are “gay parents.”

“They are wonderful people," the governor said. “They are raising an amazing son. I’m concerned with any group that doesn’t see that.”

“We’ve got a foster care system where children are crying out to have people that will love and care and invest in them," he added. "And to preclude anybody from being a part of that is concerning.”

When same-sex couples have contacted Sunrise about becoming foster parents, the agency offered to help steer them to other child services agencies that are a “better fit,” Sheller has said.