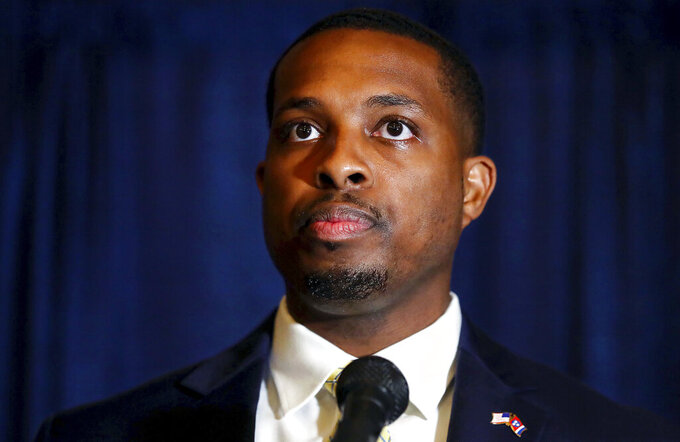 Patrick Lantrip, ASSOCIATED PRESS
FILE - Memphis City Council member JB Smiley Jr. announces his bid for governor of Tennessee at the Orpheum Theatre in Memphis, Tenn., on Sept. 8, 2021. Smiley is one of three Democrats are running for Gov. Bill Lee's job in hopes that the national political landscape, combined with some controversies over his time running the state, could open some inroads for voters to consider a switch. (Patrick Lantrip/Daily Memphian via AP)

NASHVILLE, Tenn. (AP) — Since Tennessee Gov. Bill Lee won his election in 2018, the Republican has led the state during a global pandemic, uprisings over racial injustice across the country, mass shootings nationwide and the Supreme Court's end to the constitutional right to abortion.

Three Democrats are running for Lee's job in hopes that the national political landscape, combined with some controversies over his time running the state, could open some inroads for voters to consider a switch. It won’t be an easy ask in Tennessee, which has elected only Republicans statewide for more than 15 years.

Even in the most tumultuous times, Lee has continued to poll strong and positioned himself for reelection, with little expectation that voters would start changing course from the GOP now.

Jason Martin, a critical care physician from Nashville, announced his bid for governor as a lead critic of Lee's COVID-19 pandemic approach. JB Smiley, a Black city councilman and attorney in Memphis, is vying for the nomination as well. The Democratic field rounds out with Carnita Atwater, a former nurse and community leader in Memphis.

They've had to adjust as Lee's hands-off approach to the pandemic went from top-of-mind to a lesser priority, given the public's fatigue over COVID-19 issues and the rise of other imminent controversies. Some of those include the ongoing fallout of the elimination of constitutional abortion rights and recent comments disparaging teachers by a charter school operator for whom Lee wants to help set up dozens of schools in the state.

Martin said Lee's handling of COVID illustrates a broader context of leadership deficiencies — from not speaking up while on stage during the controversial comments on teachers, to declining to veto a bill that imposes harsher sentencing, despite his focus on the need for criminal justice reform.

“I’m just as tired of COVID as everybody else, believe me,” Martin said in an interview with The Associated Press, noting the 26,000-plus COVID deaths tallied in the state. “But what we talk about is leadership, and COVID was an example of failed leadership, a fend-for-yourself approach by the governor.”

Smiley says he's hoping to capitalize on the simmering voter outrage by not shying away from his Democratic Party affiliation he feels past candidates have done to woo those uneasy backing a Democratic hopeful.

“Teachers are angry, women are angry, young people are angry and that anger turns to action and activism,” Smiley said. “It will cause the Democratic Party to rise up again and say you know what, we’re right on the issues.”

So far, the candidates have focused on criticizing Lee rather than attacking one another due to largely sharing similar policy positions. These include approving restoring and protecting the right for a woman to get an abortion and LGBTQ rights, expanding Medicaid eligibility, legalizing marijuana and funneling more money toward teachers' salaries.

Yet Smiley, 34, who was elected to the Memphis city council in 2020, points out that he's the only Democratic candidate who has been elected to a government office. In an interview with The Associated Press, Smiley grouped his opponent Martin with Lee and former President Donald Trump as examples of people who have sought top elected offices with no prior experience.

“We’ve already seen what it’s like when someone with no government experience,” he said, adding that he believes “working class people deserves a working class governor who understands the issues that we’re facing.”

Martin said in response that “you don’t have to be a career politician to be a public servant,” noting his track record in health care of caring for underserved communities. He touted a series of endorsements from Democratic state lawmakers and said he's traveled to all 95 counties to help inform his policy platform.

Atwater did not return emailed requests for comment. She's raised roughly $2,000 since she announced her campaign and had not spent any of it, according to the last campaign filing report filed in April.

Lee defeated a Democratic opponent by 21 percentage points in 2018.

Tennessee history does not bode well for those trying to oust a sitting governor. The last defeat was in 1938, when Prentice Cooper beat then-Gov. Gordon Browning in the Democratic primary, though from 1953 to 1978, governors had to sit out for a term before seeking another run, according to legislative historian Eddie Weeks.

The same year, Democrats thought they had a chance to win an open U.S. Senate seat with former popular Gov. Phil Bredesen, a moderate and the last member of his party to win statewide, in 2006. But Bredesen ended up losing by about 11 percentage points to Republican Marsha Blackburn, with the race turning into a referendum on whether to give Democrats the chance to take a Senate majority.

In recalibrating from that loss, Democrats took an unexpected path in 2020. Another open Senate race saw primary voters decidedly vote against a well-funded candidate backed by Democrats' congressional campaign arm. Instead, they opted for Marquita Bradshaw, a Black progressive community activist from Memphis who was little known and underfunded. She wound up losing by 27 percentage points to Republican Bill Hagerty.