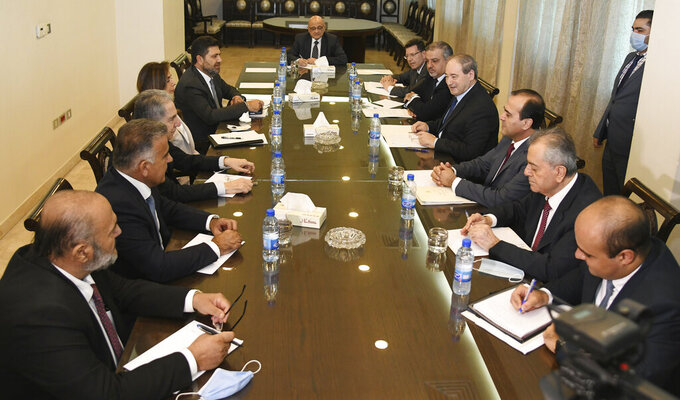 DAMASCUS, Syria (AP) — A senior Lebanese government delegation asked Syria on Wednesday to allow Egyptian natural gas and Jordanian electricity to pass through its territory to ease a crippling fuel crisis that has paralyzed Lebanon.

The request came during an official visit to Damascus that marked an end to more than a decade of icy relations between the neighbors, following the outbreak of the Syrian civil war in 2011.

Lebanon is witnessing an economic crisis described as one of the world's worst since the 1850s.

Lebanon’s senior delegation, led by the caretaker Defense Minister and acting Foreign Minister Zeina Akar, asked Syria to revive an agreement that dates back to 2009 that allows Egyptian natural gas, coming from Jordan, through a Syrian pipeline to reach a Lebanese power plant in the country’s north.

“The Lebanese side asked Syria’s help in facilitating the transfer of Egyptian natural gas and Jordanian electricity through Syrian territories. The Syrian side welcomed the request,” said Nasri Khoury, the head of Damascus-based Syrian Lebanese Higher Council, a government-linked body for bilateral relations. He spoke following a two-and-a-half hour meeting in Damascus.

The flow of Egyptian natural gas to Syria was discontinued in 2010 because of sabotage attacks and shortages. The pipelines have also been damaged during the civil war in Syria.

Lebanon’s pivot toward Syria marks a change in government policy in favor of Iran’s allies in the small Mediterranean country. Lebanon has been deeply divided over the Syrian war.

Syrian state media touted the visit as one that “breaks the ice and revives (bilateral) relations.” Syria’s Foreign Minister Faisal Mikdad received the delegation at a border crossing Saturday before driving on to Damascus together.

The meeting is also a test for U.S. sanctions against Iran and Syria, as Lebanon seeks to use Syrian pipelines and Iranian fuel through Syrian ports to tackle its power crisis.

Amid worsening shortages that paralyzed the country and raised social tensions, the leader of the Iran-backed Lebanese militant Hezbollah group has arranged with allies in Tehran to ship Iranian fuel to Lebanon.

The shipment, which reportedly sailed two weeks ago, is expected to be delivered at Banyas — a major Syrian port — and transported by land through tankers organized by Hezbollah, according to local media.

The delivery would violate U.S. sanctions on Iran imposed by former President Donald Trump, who pulled Washington out of a nuclear deal between Iran and world powers in 2018.

No date is set yet for the fuel arrival. Many in Lebanon fear it could trigger penalties for violating U.S. sanctions.

U.S. officials have warned against Lebanon using Iranian oil and have offered assistance to deal with the economic crisis, the biggest threat to Lebanese stability in decades.

Visiting U.S. officials have said they were in talks to find long-term solutions to Lebanon’s fuel crisis, including the delivery of Egyptian natural gas through Jordan by way of the pipeline going through Syria.

Syria is subject to U.S. sanctions that target those doing business with the Syrian government and its allies. It is not clear if the U.S. would consider the transfer of natural gas through Syria as a humanitarian gesture, since humanitarian aid is exempt from the sanctions.

Iran has already been sending fuel to Syrian President Bashar Assad's government, which it has supported throughout the war that broke out in 2011.

In Lebanon, the Syrian war had caused domestic rifts — with the government maintaining diplomatic ties and minimal security coordination but divided over keeping regular state visits and relations.

Hezbollah, the Iran-backed group, had sent fighters into Syria to support Assad’s troops in their war against opponents, changing the tide of the war. But other parties in Lebanon, most of them allies of Western and Gulf countries, supported the opposition.

Lebanon is also host to over 1 million Syrians, the largest per capita population of refugees in the region.