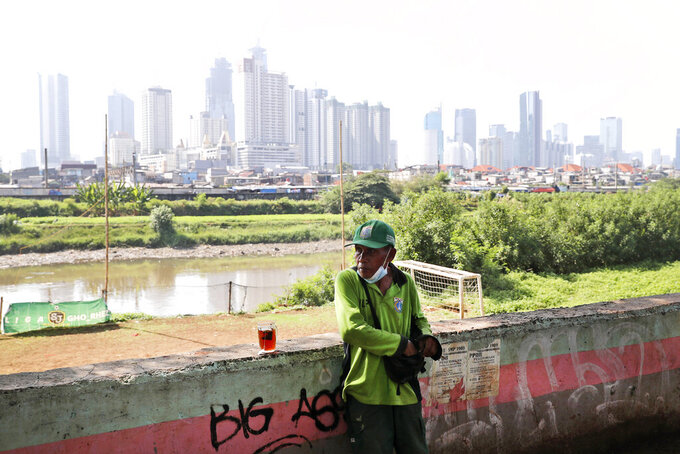 Tatan Syuflana, ASSOCIATED PRESS
A municipal worker takes a break as the hazy city skyline is seen in the background in Jakarta, Indonesia, Thursday, Sept. 16, 2021. An Indonesian court ruled Thursday that President Joko Widodo and six other top officials have neglected to fulfill citizens' rights to clean air and ordered them to improve the poor air quality in the capital. (AP Photo/Tatan Syuflana)

NEW YORK (AP) — Indonesia's leader said Wednesday that inclusiveness and a sustainable, green economy would be among his priorities when he assumes the G-20 presidency next year.

In a recorded statement to the U.N. General Assembly, Indonesian President Joko Widodo committed to working for the benefit of all, including “vulnerable groups that must be prioritized.”

Calling for countries to work in concert, he advocated for reorganizing the architecture to mobilize global health security resources, like funding and vaccines, and establishing a standardized global health protocol for travel.

The 60-year-old Widodo, popularly known as “Jokowi,” presents himself as a man of the people and campaigned in part on a pledge to run a clean government in a country rife with corruption. His credibility in improving infrastructure and the environment in the world's fourth-most populous country and Southeast Asia's largest economy helped him win a second term in 2019.

“Indonesia’s commitment toward climate resilience, low carbon development and green technology is firm and clear,” he said, but added that developing countries need to be included in energy and technology process transformation. He underscored the importance of diversifying the locations of production centers.

After his reelection, Widodo himself announced he would relocate the country's capital from the sinking Jakarta — located on the island of Java that's home to 57% of the country's 270 million people — to a sparsely populated province on Borneo island, known for its rainforests and orangutans.

Widodo's government has eagerly courted foreign investors as drivers of economic growth in Indonesia, where nearly half the population is younger than 30.

“Global economic recovery can only be attained if the pandemic is under control and countries join hands in helping one another,” he said. “Indonesia, along with other developing countries, embraces quality investments.”

A jobs law implemented last year was intended to improve bureaucratic efficiency to attract that foreign investment. It was received with mass protests sparked by concerns over weakened labor and environmental protections.

Widodo has taken additional heat on the environment. Last week, an Indonesian court ordered him and other government officials to improve the air quality in Jakarta, finding that they had neglected citizens' rights to clean air.

Widodo said Indonesia reduced its forest fires by 82% in 2020, compared to the previous year. Deforestation rates also dropped to their lowest in 20 years, he said. Burning of forests, often for the purpose of clearing land for development, causes harmful smog around the region.

“Indonesia is aware of our strategic place on climate change. Thus, we will continue to work hard to fulfill our commitments,” he said, later adding that the country believes in “burden sharing, not burden shifting.”

While climate change and the economy made up a substantial portion of the president's speech, he also highlighted issues of terrorism, conflict and war.

“Concerns on the marginalization of women and violence in Afghanistan, Palestine’s elusive independence, and the political crisis in Myanmar must be our common agenda,” he said.

On that last point, he reiterated Association of Southeast Asian Nations leaders' call for Myanmar's military to assent to the five-point consensus agreed upon in April. That consensus established after the military takeover in Myanmar in February included the start of a dialogue facilitated by a special ASEAN envoy. Brunei's Erywan Yusof was named to the position last month.