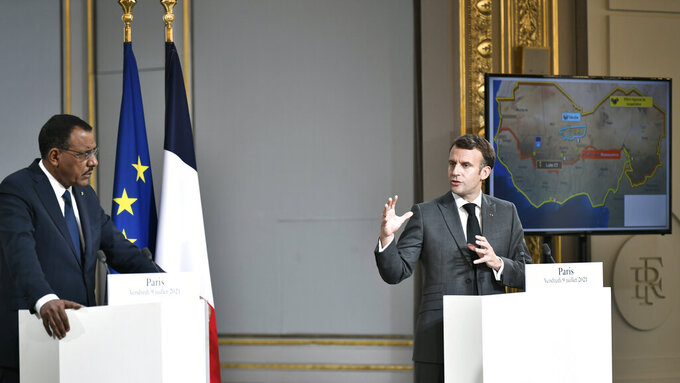 PARIS (AP) — France will withdraw more than 2,000 troops from an anti-extremism force in Africa’s Sahel region by early next year and pivot its military presence to specialized regional forces instead, President Emmanuel Macron said Friday.

Macron announced last month a future reduction of France’s military presence, arguing that it’s no longer adapted to the needs in the area. The French Barkhane force, operating in Mali, Chad, Niger, Burkina Faso and Mauritania, had also met opposition from some Africans.

After discussions Friday with leaders of the African countries involved, Macron announced that France would reduce its force to 2,500 to 3,000 troops over the long term. The country currently has 5,000 troops in the region.

The French leader insisted that his country is not abandoning African partners, and would keep helping them fight groups linked to Al-Qaida and the Islamic State group.

“France doesn’t have the vocation or the will to stay eternally in the Sahel,” Macron said. “We are there because were asked to be.”

French troops have been present in Mali since 2013, when they intervened to force Islamic extremist rebels from power in towns across the country’s north. Operation Serval was later replaced by Barkhane and was expanded to include other countries in an effort to help stabilize the broader Sahel region.

Islamic militants, though, have continued to launch devastating attacks against the militaries fighting them as well as increasingly against civilians.

Hundreds have died since January in a series of massacres targeting villages on the border of Niger and Mali.

While governments in the Sahel have embraced France’s military help, some critics have likened their presence to a vestige of French colonial rule.

France will focus over the next six months on dismantling the Barkhane operation and reorganizing the troops, Macron said.

The French military will shut down Barkhane bases in Timbuktu, Tessalit and Kidal in northern Mali over the next six months, and start to reconfigure its presence in the coming weeks to focus particularly on the restive border area where Mali, Burkina Faso and Niger meet.

Niger’s President Mohamed Bazoum, speaking at Macron’s side, welcomed the French military support and training, but on African terms.

“The main thing is that France maintains the principle of its support, its cooperation and support for the armed forces of our different countries. We need France to give us what we don’t have. We don’t need France to give us what we already have,” he said, without elaborating. He acknowledged failings of local armed forces but also praised their courage in fighting extremists.

France’s military presence in the future will focus on neutralizing extremist operations and strengthening and training local armies, Macron said. “There will also a dimension of reassurance ... to remain permanently ready to intervene rapidly in support of partner forces,” notably via military aviation from Niger and Chad.

This new structure “seems to us to respond better to the evolution of the threat,” he said. Once the reorganization is complete, he said, “the Barkhane operation will close down.”

Some experts say that France’s decision may be linked to growing political instability in Mali.

Macron’s June announcement came days after Mali coup leader Col. Assimi Goita was sworn as president of a transitional government, solidifying his grip on power in the West African nation after carrying out his second coup in nine months.

Late in June, the U.N. Security Council unanimously adopted a resolution extending the U.N. peacekeeping mission in crisis-wracked Mali and said it’s “imperative” that the military government holds presidential and legislative elections on schedule next February.

The council maintained the ceilings in the U.N. force at 13,289 military troops and 1,920 international police, but it asked Secretary-General Antonio Guterres to make a recommendation on the force level given growing levels of insecurity and physical violence against the civilian populations in central Mali.