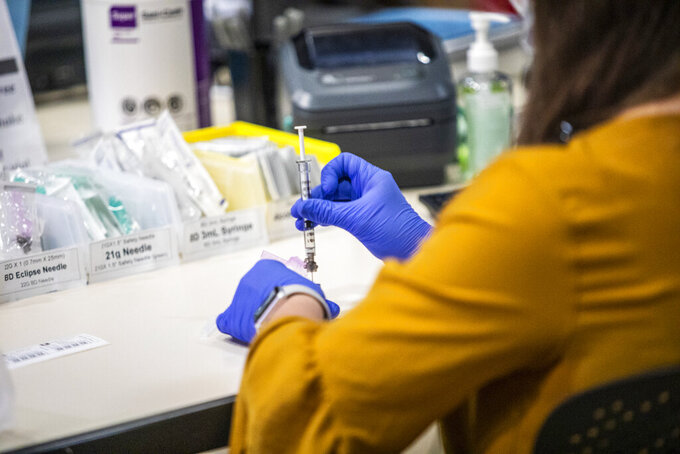 Travis Long, ASSOCIATED PRESS
A healthcare worker prepares a Pfizer vaccine dose at a large-scale vaccination site at UNC's Friday Center in Chapel Hill, N.C. Tuesday, Jan. 19 2021. Major hospital systems across North Carolina will soon require workers to get a COVID-19 shot if they want to keep working at the facilities. The decision comes as state health officials warn of a rise in cases fueled by the delta variant. Communities with large unvaccinated populations have been particularly hard hit. The state Healthcare Association said on Thursday, July 22, 2021 that Duke Health, Atrium Health and many UNC Health hospitals will soon compel workers to get vaccinated. (Travis Long/The News & Observer via AP)

WakeMed Health & Hospitals informed its staff last week of its decision and confirmed the plan to The Associated Press on Tuesday.

The Raleigh-area system with 946 beds across three acute care hospitals and one physical rehabilitation hospital has not yet decided when the requirement will take effect but said it will apply to “all employees, providers and volunteers in the near future.”

“WakeMed has strong confidence in the science, safety and efficacy of the vaccines, and the available data continues to reinforce these beliefs,” WakeMed spokesperson Kristin Kelly said in a statement. “Throughout this pandemic, our number one priority has been to protect the health and well-being of our staff, patients, family members and the broader community and to reduce the risk for those most vulnerable to COVID-19. Science has demonstrated that the best way that we – as an organization and as individuals – can do this is through vaccination.”

The hospital system is the leading provider of health services in Wake County, which is the second largest county in the state and home to more than 1 million residents.

The announcements from WakeMed and the North Carolina Healthcare Association come in response to growing concern of the more contagious delta variant and heightened confidence in the safety and efficacy of the COVID-19 vaccines. The decisions also come on the heels of an announcement from Democratic Gov. Roy Cooper that he'd let the statewide mask mandate expire Friday and ease masking requirements in schools.

His move to ease restrictions implemented to combat the virus are being made at a time when nearly all available metrics show COVID-19 transmission skyrocketing to their worst levels in months.

For the first time since early May, data released Tuesday by North Carolina's Department of Health and Human Services shows more than 1,000 residents currently hospitalized because of COVID-19. The 1,031 reported hospitalizations represent a nearly 112% increase from two weeks ago, when fewer than 500 people were in the hospital. Over the past two weeks, the rolling average number of daily new cases has risen by 944, an increase of 134%.

The state health department also reported Tuesday that more than 10% its most recent daily COVID-19 tests performed came back positive, a mark not seen since Feb. 1, when vaccines were not widely available. One month ago, the positivity rate was above 2%.

Cooper has traversed the state pleading for unvaccinated residents to come in for a shot, but his office declined to say whether the governor believes state workers should be required to get vaccinated.

Kelly said WakeMed's executive board, vaccine planning team and others have discussed the idea of mandating the shots for months.

As of Tuesday, 54% of residents eligible for a shot because they are at least 12 years old are fully vaccinated.