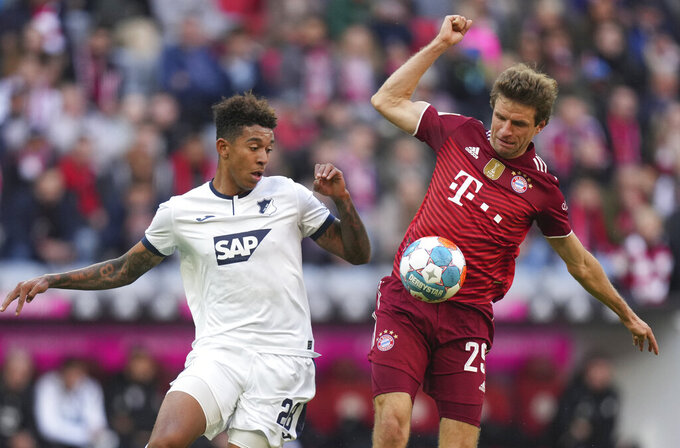 DÜSSELDORF, Germany (AP) — Making a mark in German soccer is far from easy for any player, even more so at perennial champion Bayern Munich.

United States center back Chris Richards is adapting well to life in Europe, though, and has become a regular starter on loan at Hoffenheim. He's already eyeing a place in parent club Bayern's first team next season on a squad that's among the most competitive anywhere.

Alabama-born 21-year-old Richards joined Bayern in 2018 from its partner club in Major League Soccer, FC Dallas, initially on loan before signing a permanent contract in January 2019.

He's played 10 times for Bayern, including three games in last season's Champions League, but Richards' main impact has been on loan at Hoffenheim with 22 games, 19 of them starts, this season and last.

Hoffenheim allows Richards much more game time in what he calls “grown man football” in his favored center-back role, after experimenting with a shift to full-back for Bayern. It also puts him up against talented, experienced strikers week-in, week-out, as Richards says he's focused on improving his one-on-one defensive skills.

Returning to Bayern next season would pit him against some of the best defenders in Europe for scarce starting spots.

“If I continue doing what I should be doing here and continue to develop, I don’t see why I can’t push (Niklas) Süle, (Benjamin) Pavard or (Lucas) Hernandez, (Dayot) Upamecano, any of those guys out," he said. "It’s one thing to say it and one thing to do it. I have a lot of work to do.”

Richards is part of a long tradition of U.S. players in the German league, going back to the likes of Landon Donovan or Eric Wynalda in the 1990s, and more recent standouts like Christian Pulisic, now at Chelsea. Richards has four caps for the U.S. and played the full 90 minutes in last month's 2-1 win over Costa Rica.

Even while Richards is still establishing himself in Germany, he's trying to encourage more American players. Bayern's partnership with Dallas led to six players coming over to Munich from the U.S. last season to train, with 17-year-old defender Justin Che also playing eight games for Bayern's reserve team on loan.

“A lot of us played in the academy together. And so when they came over, I saw them around Munich,” Richards said.

“We’ve always kept in contact since I’ve left the academy and wherever they are in their careers, we always kept contact. And so with them coming over here, they gained a lot of valuable experience and it's their first look into European football. They were seeing how high the level was and how close they were to making it.”