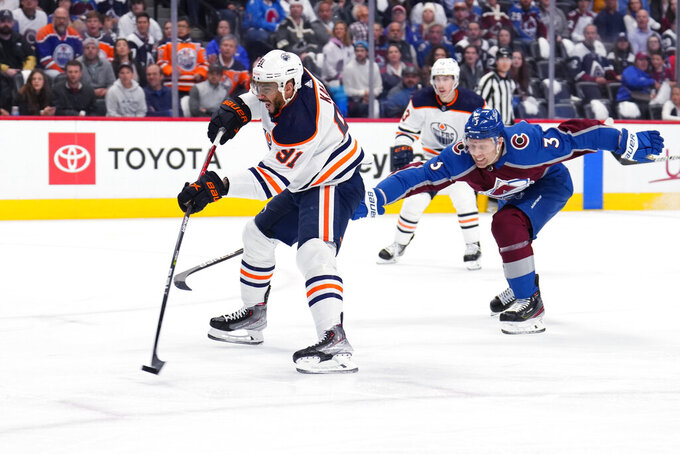 DENVER (AP) — In between delivering checks on the ice, Jack Johnson hit the books just as hard.

The 35-year-old Colorado Avalanche defenseman earned his general studies degree this spring from the University of Michigan. Just part of a rewarding stretch for Johnson, who after five teams and more than 1,000 NHL games finally reached the Stanley Cup Final.

“Let’s see, that (degree) takes me 18 years?” Johnson cracked Saturday before Game 2 against Tampa Bay. “Most people are at least a doctor at that point.”

His graduation fulfilled a promise not only to himself but one he made to Red Berenson, his coach at Michigan for two seasons (2005-07).

“I called him as soon as I (finished my degree),” said Johnson, who attended training camp with Colorado on a professional tryout before signing a one-year deal with the team Oct. 10. “(Finishing) was just a big thing for myself.

"As a kid I grew up dreaming of playing college hockey at Michigan. I wanted to graduate from there — No. 1-ranked public school in the country. So it meant a lot to me.”

Johnson said he chipped away at his degree over the years by taking classes online in the spring when his team didn’t make the postseason.

Here's one stat he may be fond of: He has 24 hits over eight games in Colorado's postseason run. That includes a big blow on Lightning forward Brandon Hagel early in Game 1. Johnson was inserted into the lineup in Game 4 of the St. Louis series.

“It’s incredibly special,” Johnson said of making the final. “You never know if you’re going to get an opportunity to play for it. We’ve worked so hard this year to get to this point where we now have an opportunity.”

In March, Johnson appeared in his 1,000th NHL game to become the 21st U.S.-born blueliner to reach that mark.

After being questionable to play in Game 1 because of an undisclosed injury, Hagel said he’s “all good” and 100% healthy now. That’s important for the Lightning given how well the gritty forward has fit in since joining Tampa Bay in a trade with Chicago prior to the deadline.

“We identified a role for him, and I think he’s been exceptional for us,” coach Jon Cooper said. “He’s just a burst of energy. I know he’d like to score more. But like I told him, ‘You don’t have to. What you do for us in your energy, your forechecking ability, the way you skate and they continue to get chances.’”

Stephen Curry and the Golden State Warriors cleared the way for the Stanley Cup Final by wrapping up their fourth NBA title in eight seasons.

The stage now belongs to Nathan MacKinnon, Nikita Kucherov and the rest of the Avalanche and Lightning.

“We have two of the top teams going at it,” Tampa Bay forward Corey Perry said. “Hockey is in a good spot and rising. We’re here today to put on a good show but also to (win the Cup). That’s all that really matters to us.”