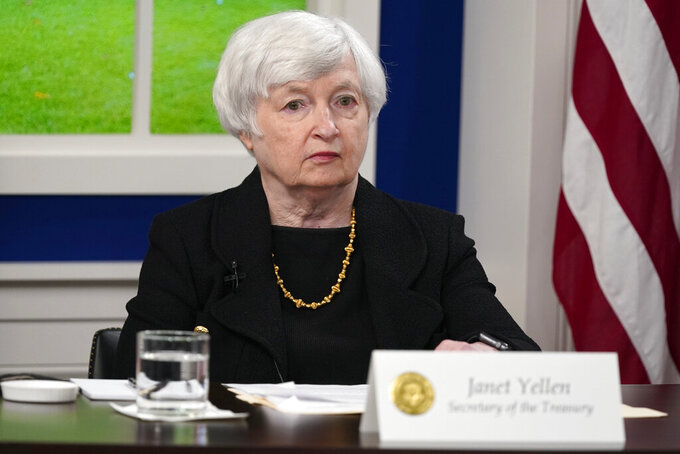 Evan Vucci, ASSOCIATED PRESS
Treasury Secretary Janet Yellen listens as President Joe Biden speaks during a meeting with business leaders about the debt limit in the South Court Auditorium on the White House campus, Wednesday, Oct. 6, 2021, in Washington. The Treasury Department said Wednesday it plans to start scaling back the size of some of its government debt auctions, a sign that the government’s huge pandemic-driven borrowing needs are starting to ease. (AP Photo/Evan Vucci)

WASHINGTON (AP) — The U.S. Treasury Department plans to start scaling back the size of some of its government debt auctions, a sign that the government's huge pandemic-driven borrowing needs are starting to ease.

The government began selling debt at accelerated levels to fund the trillion-dollar-plus support bills Congress started passing the the spring of 2020 after the pandemic-triggered shutdowns forced millions of people out of work.

Treasury on Wednesday released a schedule for auction sizes of securities ranging from two-year notes to 30-year bonds.

The reductions announced Wednesday would result in an $84 billion reduction in Treasury auctions from November through January 2022,.

Over the next three months, the Treasury anticipates reducing the size of the two-year, three-year and five-year note auctions by $2 billion each on a monthly basis through the end of January.

Reductions in auction sizes were also announced for other government debt including 10-year notes and 30-year bonds.

In some cases, Treasury said some of these security auctions were “increased significantly more than others in response to the increase borrowing needs driven by the COVID-19 pandemic.”

The statement on reduced borrowing amounts for various Treasury securities came as part of the government's regular quarterly refunding announcements when it disclosed the timing of a group of auctions held every quarter.

The Treasury auctions this quarter could be altered if Congress does not suspend or increase the debt limit. In a letter to Congress last month, Treasury Secretary Janet Yellen said the debt-limit agreement approved by Congress in October would allow the government to keep paying its bills through Dec. 3.

Yellen said that deal, which boosted the debt ceiling by $480 billion, would provide “only a temporary reprieve” and urged lawmakers to move quickly to pass a larger increase in the debt ceiling to avoid what she has termed would be a “catastrophic” government default that she warned could push the country into a recession.

Treasury officials said Wednesday that they had no update on Yellen's Dec. 3 estimate on when she might run out of maneuvering room to keep employing the extraordinary measures she has been using to keep paying the governments bills.

Yellen has said she had a “high degree of confidence” that Treasury could keep paying the government's bills through Dec. 3 but she has not given a more specific date on when her maneuvering room will be exhausted. Dec. 3 is also the deadline Congress must meet to pass a budget bill to avoid a government shutdown.

Some private analysts have said that Yellen may have the abiility to keep from breaching the $28.8 billion debt limit until February. Treasury officials said they were aware of the range of forecasts that have been made on when the extraordinary measures could be exhausted.