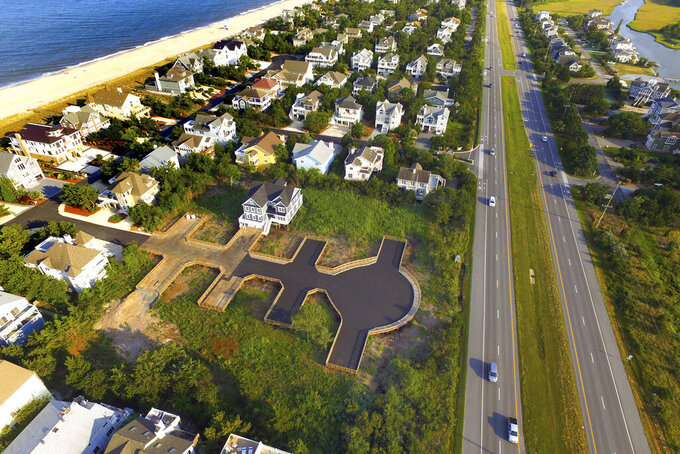 Gary Emeigh, ASSOCIATED PRESS
FILE - An aerial photo taken Tuesday, July 16, 2019, in Bethany Beach, Del., shows a wooden road built on pilings in one of the freshwater wetlands in coastal Delaware where the Bethany Beach Firefly, which some environmentalists want added to the federal Endangered Species List, has been previously found. The twinkles of light that meander about on locations like Bethany Beach could be snuffed out permanently, state and federal researchers warn, if the rare firefly is not further protected.(AP Photo/Gary Emeigh, File)

BETHANY BEACH, Del. (AP) — The twinkles of light that meander about on locations like Bethany Beach could be snuffed out permanently, state and federal researchers warn, if the rare firefly is not further protected.

The diminutive but bright Bethany Beach Firefly measures only 9.0 to 10.75 millimeters long and has a tan to light brown body, with dark brown or black markings, and must wait till 2024 to get a decision by the U.S. Fish and Wildlife Service on whether it will get protection under the Endangered Species Act.

Currently, the 2019 petition for the protected status by the Center for Biological Diversity and Xerces Society for Invertebrate Conservation is still under review. The question now is if the insect can hold on for that long.

As with similar species that use freshwater areas during part of their lifecycle, the confluence of events such as over-development into wetlands and sea level rise that encroach into freshwater areas are making the wait tenuous at best.

“This wetland specialist inhabits dunes areas along a small stretch of Atlantic Coast. The area was once shrouded in darkness, which let the males and females find and mate with each other, putting on an amazing light show,” the center said in a statement on the petition.

Another factor noted by both petitioners is that they are often collateral damage when it comes to mosquito spraying in wetlands.

Pesticides designed to control one pest is decimating another welcomed species, the center argues.

“Rapid urbanization — including more night lighting — and increased spraying for mosquitoes imperil the Bethany Beach firefly. This beetle is also imminently threatened by housing construction in one of its last remaining habitats along the Delaware coast,” the center said in their species overview.

Just how these invertebrates use their pattern of green flashing is both ingenious and cunning.

Male and female fireflies use bioluminescence, or biological light, to attract mates. Males flash their unique pattern in an attempt to entice females, often waiting on the ground or in vegetation to flash back.

After mating, some female fireflies will continue to flash, but this time mimicking other firefly species to lure in males so they can eat them and gain their valuable protective toxins.

Firefly larvae live in soil, consuming soft-bodied arthropods, just like snails, slugs and worms. When pesticides like neonicotinoids get into the soil and water, they harm firefly larvae and their prey.

There are at least 125 species of fireflies in the United States, but despite the many threats they face, none are protected by Endangered Species Act.

“Wildlife biologists with the Delaware Department of Natural Resources and Environmental Control are actively conducting surveys throughout Delaware to detect rare, localized populations, such as the Bethany Beach firefly,” the department said.

While Bethany Beach is known largely as a tourist hotspot and the lowly firefly is the namesake for a seminal music festival, conservationists still push the message that the state’s beaches are still an ecosystem.