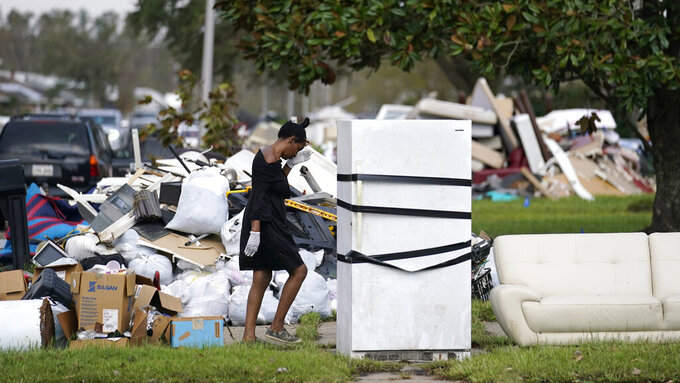 Gerald Herbert, ASSOCIATED PRESS
Lori Butler wipes her brow as she moves debris she is gutting from her home that was flooded, in the aftermath of Hurricane Ida in LaPlace, La., Tuesday, Sept. 7, 2021. (AP Photo/Gerald Herbert)

BATON ROUGE, La. (AP) — Hundreds of thousands of Louisiana homeowners, many of them still digging out of Hurricane Ida's destruction, will soon see rising flood insurance bills. But the federal government is providing few details about how much its recalculation of rates will boost premiums beyond the first year.

Insurers, homeowners and politicians getting their first glimpses at cost increases people around south Louisiana and other coastal regions might see from the National Flood Insurance Program are starting to sound alarms. They say people could end up being billed thousands more annually after the full phase-in, and they suggest the Federal Emergency Management Agency deliberately won't share information about how expensive premiums will get.

They say such increases add insult to injury for Louisiana residents still trying to recover from last year's Hurricanes Laura, Delta and Zeta and Ida's new blow in August.

“These are working families who are trying to make ends meet, and suddenly they’re no longer able to protect themselves,” said Republican U.S. Sen. Bill Cassidy.

Cassidy, other members of Louisiana's congressional delegation and lawmakers from additional coastal states urged President Joe Biden's administration to delay the changes, to no avail.

The flood insurance rate recalculation — which has been proposed for years — began Friday for people seeking new policies and starts April 1 for policies being renewed.

In Louisiana, up to 80% of the 496,000 National Flood Insurance Program policies are expected to see price hikes in the first year. Most face an initial yearly increase of no more than $120, according to the Federal Emergency Management Agency.

But details get vague on how many people will see additional price hikes in later years and how large they'll be.

The Independent Insurance Agents and Brokers of Louisiana asked federal officials for rate charts that show the long-term pricing changes.

“They said, ‘We don’t have that put together yet,'" said organization CEO Jeff Albright. "How do you make that decision without having the full information?”

Republican U.S. Reps. Steve Scalise and Garret Graves, in a letter urging delay, wrote that a Larose homeowner seeking a new flood insurance policy was quoted a $572 annual premium to take effect Sept. 30. When the policy shifted to an Oct. 8 start date, the yearly premium was quoted at $5,531.

“We can no longer ignore the fact that some of our policyholders have been unjustly subsidizing other policyholders,” David Maurstad, FEMA’s senior executive for the National Flood Insurance Program, told reporters Sept. 24, according to a call transcript.

Homes and businesses located in areas considered at high flooding risk are required to have flood insurance if they have government-backed mortgages. Some lenders require flood insurance in other areas as well. Most of that coverage is provided through the federal program.

FEMA said the program collected $60 billion in premiums over the last 50 years but paid out $96 billion in claims.

Louisiana officials caution the new rate calculations could drive people in lower risk areas out of the flood insurance program, damaging its solvency. They worry rate hikes could make it harder for some people to stay in their homes or sell them to others, harming the housing market. And they say chasing people out of the program will drive up other federal disaster aid costs.

“It becomes very unmanageable after those 18% increases continuously compound for years to come. In four short years, 18% compounding increases cause a premium to nearly double,” said U.S. Sen. Bob Menendez, a New Jersey Democrat who joined Cassidy in criticizing the changes.

Maurstad said half of all policyholders will reach the full increased price after five years of premium hikes. Another 40% will see cost increases for a decade before reaching the new rate, he said. Others will take even longer. Properties that were grandfathered in at prior flood insurance rates if the risk calculation changed for the area will lose that premium discount.

“The only way this gets stopped is if Congress stops it, and right now I’m not sure if Congress can agree on anything,” said Albright.