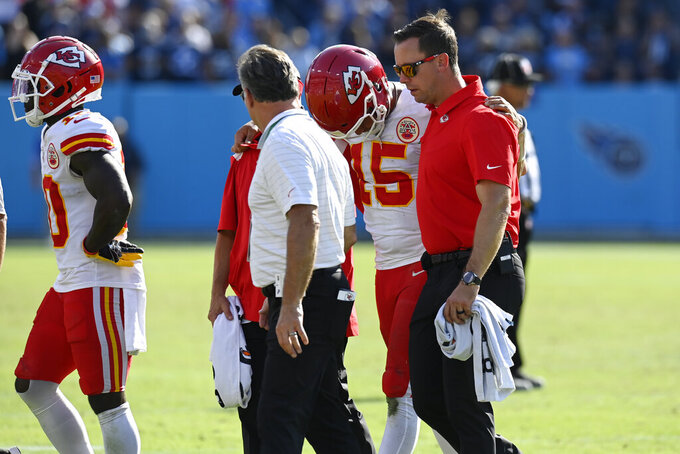 Mark Zaleski, ASSOCIATED PRESS
Kansas City Chiefs quarterback Patrick Mahomes (15) is helped off the field after being hit in the second half of an NFL football game against the Tennessee Titans Sunday, Oct. 24, 2021, in Nashville, Tenn. (AP Photo/Mark Zaleski)

KANSAS CITY, Mo. (AP) — The Chiefs normally lean on the “first 15,” the opening scripted plays in coach Andy Reid’s offense designed to get his team into a rhythm and set the tone for the game.

Nothing went according to plan against Tennessee on Sunday, however, as a false-start penalty, a run for a loss, an interception and a fumble in the first 16 offensive snaps put Kansas City in a 27-0 deficit before halftime en route to a 27-3 loss to the Titans.

“That’s been kind of our M.O. right now,” Reid said Monday. “That’s the obvious. Those are things that it doesn’t take an expert here to see and until we fix that, then you’re going to have a problem. At this level you’ve got a problem.”

The enigmatic Chiefs find themselves at 3-4 despite averaging more points and yards per possession than any team in the NFL. That’s largely because they also lead the league in turnovers, with unforced errors such as penalties, drops and faulty execution.

Quarterback Patrick Mahomes contributed to the struggles on Sunday, setting a career low with a 62.3 passer rating while turning over the football twice. He conceded to pressing too much in the first half, including on his fumble at the end of a scramble near the end of the half that set up the Titans with a field goal.

“I don’t know if it was just me trying to make things happen,” Mahomes said. “In this league you have to kind of just have things develop. You have to go through the process of making plays and it takes one play at a time. People always talk about you can’t have a 14-point play. They scored early. I have to go through the process of just getting the ball down the field, not trying to do too much.”

Reid believes his veteran team and coaching staff can right the ship, but eliminating mistakes is absolutely essential.

“I can sit here and talk and it all sounds like excuses, but we have to fix this problem, bottom line,” Reid said.

The biggest positive Reid saw from his team on Sunday came on the flight home to Kansas City. Instead of loud music blaring from the back of the plane, Reid saw his players on their tablets re-watching the game searching for solutions.

“The games that we didn’t have quite that, then we did OK,” Reid said. “Not a lot of them, though; most of the games we’ve been kind of with that situation happening. That’s your first half. The second half we come and we cut back on those mistakes that we had and then you’re moving the football.”

Rookie linebacker Nick Bolton stood out in his first start at middle linebacker in place of injured Anthony Hitchens, making 15 combined tackles, including four for a loss. The Chiefs held league-leading rusher Derrick Henry to 86 yards on 29 carries thanks largely to Bolton’s downhill attack. This year’s second-round selection leads the team with 55 total tackles.

The Titans' pass rush had a field day against the offensive line Sunday, piling up four sacks, nine quarterback hits and 30 pressures. Left tackle Orlando Brown Jr. bore the brunt of the criticism, with the Titans pushing the pocket on the right side and attacking Brown with speed rushes 10 to 11 yards deep around the corner on Mahomes.

“The couple that Orlando got beat out were deep and around the horn,” Reid said. “We got to go back and make sure that we handle the onside right, and then Orlando can do some things with his set to make it even better there."

Mahomes left Sunday’s game after a big hit in the fourth quarter but cleared the league’s concussion protocol. “I kind of took my time getting up, but I felt fine. But obviously you go through those things, protocol things, but I did all the things I needed to be here right now.”

Reid indicated Monday he expects Mahomes to start next Monday night against the New York Giants.

17 — The Chiefs lead the league in turnovers, and it’s not particularly close. Jacksonville, Houston and the New York Jets are tied for the second-most giveaways in the league with 12, and each of those teams own one win. The Chiefs are on pace for 41 turnovers, which would be the most for a Reid-coached team since his first year as a head coach when the 1999 Philadelphia Eagles turned it over 39 times.

The Chiefs return to the practice field on Thursday to prepare for the Monday night game against the Giants at Arrowhead Stadium.