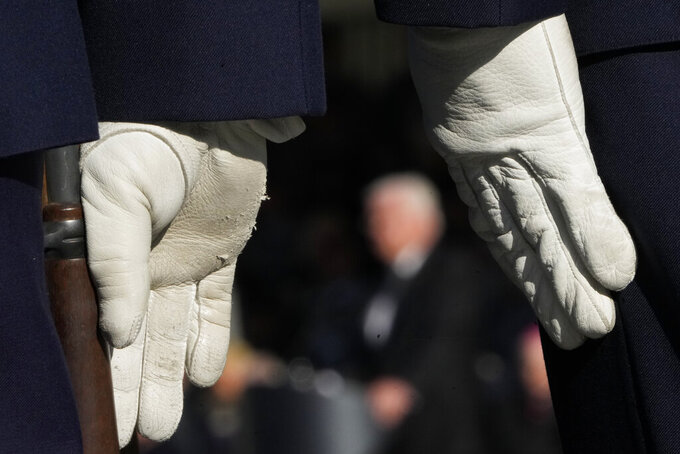 BERLIN (AP) — Germany's leaders paid tribute Wednesday to its troops that served over nearly 20 years in Afghanistan, and the country's president said the German answer to the mission's disappointing end must not be “resignation and retreat” from global affairs.

Chancellor Angela Merkel, President Frank-Walter Steinmeier and other top officials joined a final roll call for the troops at the Defense Ministry in Berlin. A military tattoo in front of the Reichstag parliament building was planned Wednesday evening.

Germany’s military, the Bundeswehr, brought home its last troops from northern Afghanistan, long the focus of the country's deployment, in late June.

After the Taliban took control of the country, Germany was one of the nations that participated in the hectic evacuation of Western nationals and endangered Afghans from Kabul airport. Germany's part of that airlift ended on Aug. 26 after the country's military evacuated more than 5,300 people, including over 4,000 Afghans. Many more remained behind.

“There is no doubt, no ifs and buts about one thing, dear soldiers: the Bundeswehr fulfilled its assignment,” Steinmeier told the troops. “Our country is proud of you.”

Looking ahead, he added, “Germany deserves a security policy that draws lessons from 20 years of Afghanistan.”

Steinmeier, who was then-Chancellor Gerhard Schroeder's chief of staff when the deployment started and later served twice as Merkel's foreign minister, said it was right to go into Afghanistan after the Sept. 11, 2001 attacks in the U.S.

“There were doubts, and often harsh criticism, but there also were always good reasons why we stayed in Afghanistan,” he said.

“For me, it is clear that the fall of Kabul was a turning point,” he added. “We are standing at a crossroads that forces us to consider self-critically our responsibility in the world, our possibilities and their limits.”

“I hope that we don't look back at this crossroads in 20 years and say that resignation and retreat was the answer to Afghanistan — it would be the wrong lesson," Steinmeier said. “Because we Germans don't live isolated on an island — even less so in 2021 than 2001.”