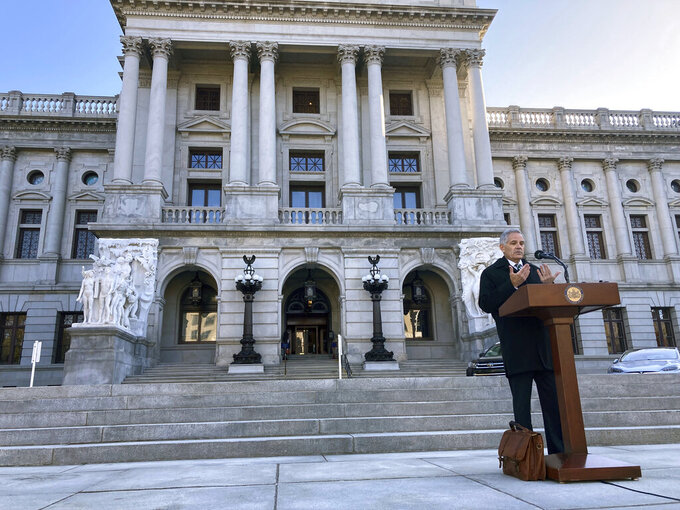 Mark Scolforo, ASSOCIATED PRESS
Philadelphia District Attorney Larry Krasner talks about Republican-led efforts to investigate his record addressing crime and gun violence on the front steps of the Pennsylvania Capitol in Harrisburg on Friday, Oct. 21. 2022. Krasner said he believes lawmakers could be voting on an impeachment effort in the state House as early as next week. (AP Photo/Mark Scolforo)

HARRISBURG, Pa. (AP) — Philadelphia's elected Democratic prosecutor faces a state Senate trial and possible removal from office after the Republican-led state House voted Wednesday to impeach him over progressive policies he has enacted amid rising crime in the city.

The move toward removing District Attorney Larry Krasner began months ago and picked up momentum in the weeks before the midterm elections, with Republicans introducing the impeachment resolution late last month. But the 107-85 nearly party-line vote marks a dramatic escalation of attacks about crimefighting policies against Democratic mayors and prosecutors that had previously been largely confined to campaign politics.

The vote sets the stage for what would be the first Pennsylvania Senate impeachment trial in nearly three decades. Republicans have a 29-21 majority in the state Senate that will become a 28-22 majority early next year, so they'd need the support of some Senate Democrats to attain the two-thirds majority vote required to remove Krasner.

Krasner, who was overwhelmingly reelected by Philadelphia voters last year, is not accused of breaking the law. Instead, Republicans argued that he should be removed from office for various reasons, including his failure to prosecute some minor crimes and his bail request policies, his staff oversight and reports that his office didn't adequately notify crime victims about certain matters. They also alleged that Krasner obstructed the House's investigation of his office.

Krasner said in a statement that the vote was the only time the state House has ever “used the drastic remedy of impeachment of an elected official because they do not like their ideas.”

“They have impeached me without presenting a single shred of evidence connecting our policies to any uptick in crime,” he said

Democrats said lawmakers have only removed two officials — both of them judges — through impeachment: the first a county judge in 1811 and then state Supreme Court Justice Rolf Larsen in 1994.

State Rep. Martina White, R-Philadelphia, a prime sponsor of the impeachment resolution and a political ally of the city police union that has clashed with Krasner, said: “This man has denied that there is even a crisis of crime happening on our streets."

“No public official is above accountability, and if not for us in this chamber, he would have no oversight,” White said.

Former prosecutor Rep. Tim Bonner, R-Mercer, said “anarchy and violence will prevail” if elected leaders can choose what laws to obey or enforce.

“No one individual has the right to set aside the laws of Congress or the General Assembly because they simply do not like the law. No one has that degree of absolute power," Bonner said.

Democrats argued that Krasner was being scapegoated for wider problems with crime, that the case against him is weak and that his removal would be an abuse of legislative power. They said the lame duck session impeachment would overturn voters' will and that House Republicans have themselves failed to act to address gun violence.

“You are doing the wrong thing,” said state Rep. Malcolm Kenyatta, D-Philadelphia. “I will be generous and say that maybe you’re making a mistake. But if you look at what is before us, and when we think about the sacred obligation we have as members of this august body, this is not what we ought to be doing.”

State Rep. Mike Zabel, a Democrat from Philadelphia who served as a city assistant district attorney under Krasner’s predecessor in office, said Krasner was being blamed unfairly for things that were not entirely his fault.

“The truth is that prosecuting crimes in one of the largest cities in the country is a complex task with a never-ending parade of challenges,” Zabel said, urging fellow lawmakers to “take a break from the political brinksmanship.”

It’s unclear when the state Senate will launch a trial. The two-year legislative session ends in two weeks, but the chamber's top ranking Republican, state Sen. Kim Ward of Westmoreland County, said this week that she intends to add days to the session to take up the matter. The process is not expected to wrap up quickly.

The resolution directed the House speaker, currently a Republican, to name two majority party members and one minority party representative to manage the case in the Senate. It's unclear how that might be affected if Democrats reclaim the House majority next year, as appears increasingly likely.

Krasner isn't the first liberal prosecutors to come under fire. Voters in San Francisco recalled District Attorney Chesa Boudin in June and an effort to recall Democratic Los Angeles District Attorney George Gascón failed this summer when organizers were unable to get it onto the ballot.