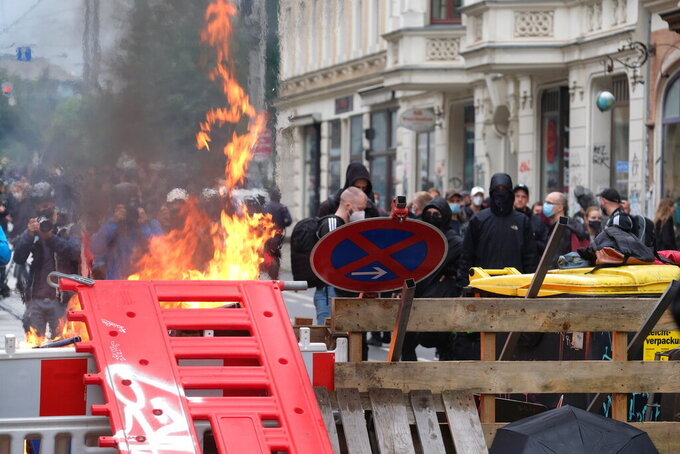 Sebastian Willnow, ASSOCIATED PRESS
FILE - In this Sept. 18, 2021 file photo, masked participants stand behind a barricade in Leipzig, Germany. After the official end of the "We are all LinX" demonstration, barricades were erected and set on fire in the Connewitz district of Leipzig. The German Journalists Association on Monday condemned attacks by police against reporters covering a far-left protest in the eastern city of Leipzig on Saturday. (Sebastian Willnow/dpa via AP) 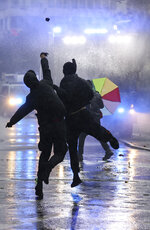 BERLIN (AP) — The German Journalists Association on Monday condemned attacks by police against reporters covering a far-left protest in the eastern city of Leipzig on Saturday.

The union, known by its German acronym DJV, said at least three journalists were physically assaulted by officers, while several other reporters said they were hindered from doing their work by police despite showing their press credentials.

The DJV's chair in Saxony state, Ine Dippmann, condemned the attacks “in the sharpest possible way” and expressed regret that they had taken place despite “the many conversations we have had with police leaders in the past months and years.”

The union said one freelancer camera operator was knocked down by police in riot gear running down a small street. Berlin-based camera operator Conall Kearney said he was filming stone throwers when the police charged.

“I was very clearly displayed as press, but when they ran past me, one shoved me into the car and another officer punched me in the back of the head,” he told The Associated Press.

Kearney said his equipment was damaged in the attack and he has set up a GoFundMe page to help cover the cost of replacing and repairing it.

Leipzig police said seven officers were injured after the protest in solidarity with a far-left group turned violent. Police said they were examining videos showing the attacks on reporters and were seeking their witness statements.